Why You Should Be Monitoring Rent Regulation

Rent regulation has the power to change a building’s value overnight. There are few government policies whose impacts can be felt so swiftly. Over the last decade there has been an increase in rent-burdened Americans– households who pay over 30% of their income to rent. This has led lawmakers to take action. In 2019, we saw New York, Oregon, and California pass new rent regulation policies.

With the Presidential election months away, this critical issue will continue to garner greater candidate and public attention. Former vice president and democratic frontrunner, Joe Biden has put forth a plan to allocate $640 billion in funding to improve affordable housing initiatives, such as Section 8 and strengthen homeownership protections. Mr. Biden’s plan does not call explicitly for rent control, however the plans of many of the other democratic candidates did – evidence of the support for these types of regulatory policy changes. Senator and former presidential candidate Bernie Sanders called for nation-wide rent regulation policies. Senator Sanders’s proposal included a national rent-control cap at “no more than one and a half times the rate of inflation or 3% whichever is higher.”

In this report we will take a look at what rent regulation is and the impact it has on commercial property markets.

What Is Rent Regulation?

Rent regulation aims to maintain affordable housing options for renters by limiting the rate at which building owners can raise rents on tenants. In the US, there have been primarily two types of rent regulation laws: first generation and second generation.

The first generation rules were created in the 1920’s and created a price ceiling that a landlord could charge a tenant, effectively earning the name “rent control.” The second generation rules aimed to limit rent increases each year and creates a schedule for a gradual rent increase. This is to ensure the landlords and building owners receive a fair return on their investment. This form of rent regulation is also referred to as: “rent stabilization.” Both of these types of rent regulation help to create a supply of below-market rental units, however they are not used equally. Today, there are more rent stabilization policies than rent control, although the terms are used interchangeably, it’s important to highlight the difference.

In addition to providing affordable housing options to millions of renters, these policies are an attractive solution because of the low cost of implementation. The speed and scale of rent regulation policy is unparalleled to any other affordable housing initiatives, such as public housing, Section 8, and LIHTC. This is because the majority of renters live in privately owned buildings. While it still requires a government body to implement these policy changes, it’s the quickest measure to address the rising costs of renting in many cities. Additionally, it’s a low-cost policy that promptly impacts all parties involved from tenant to owner.

Despite the good intentions behind rent regulation policies, these policies can have negative consequences for commercial property markets. Many of these unintended consequences come through in the way that property owners act. By changing the rents on the properties, the rent regulations can alter the perceived value of the property for the owners and renters— the rent rules change the incentives for both parties which changes their behaviors.

According to the Brookings Institute, landlords will cease making investments to repair and maintain rent controlled properties. This was proven in New York right after new rent regulation policy was passed in 2019, renovation permit applications tumbled. In other cases they may simply sell their building. There have been scenarios where the people take advantage of the policies and stay in rent controlled apartments for too long– meaning renters with a large family apartment have been known to stay in the apartment after their children have moved out, creating a shortage in supply for new families needing to rent. Renters with means can also take advantage of rent controlled buildings by renting larger apartments for themselves.

While the market impact of rent regulations can differ from market to market and is largely dependent on how strict the regulations are– 2019 saw a number of rent regulations passed in California, New York City, and Oregon. Using Reonomy data on transaction count, transaction dollar volume, and median price for multifamily properties we are able to see a range of immediate impacts.

New York City is famous for high rent and has a history with rent regulation dating back to 1943. It has only grown more severe over the decade with rent up 42% from 2010. Tenants living in rent-regulated apartments are paying more of their income toward rent than in years prior. This led to action. In June 2019, New York State lawmakers implemented legislation that makes permanent rent regulations affecting roughly one million units. The measure gives tenants the ability to sue landlords for overcharging rent while also providing state protection against eviction.

Toward the end of last year California passed a similar law, Assembly Bill 1482, also known as The Tenant Protection Act of 2019 that caps rent increase, after inflation, at 5%. “Millions of California renters are just one rent increase or eviction away from experiencing homelessness,” said Assemblymember David Chiu (D-San Francisco), the bill’s author. The bill passed and as a result California saw a large drop in transactions and in monthly volume. 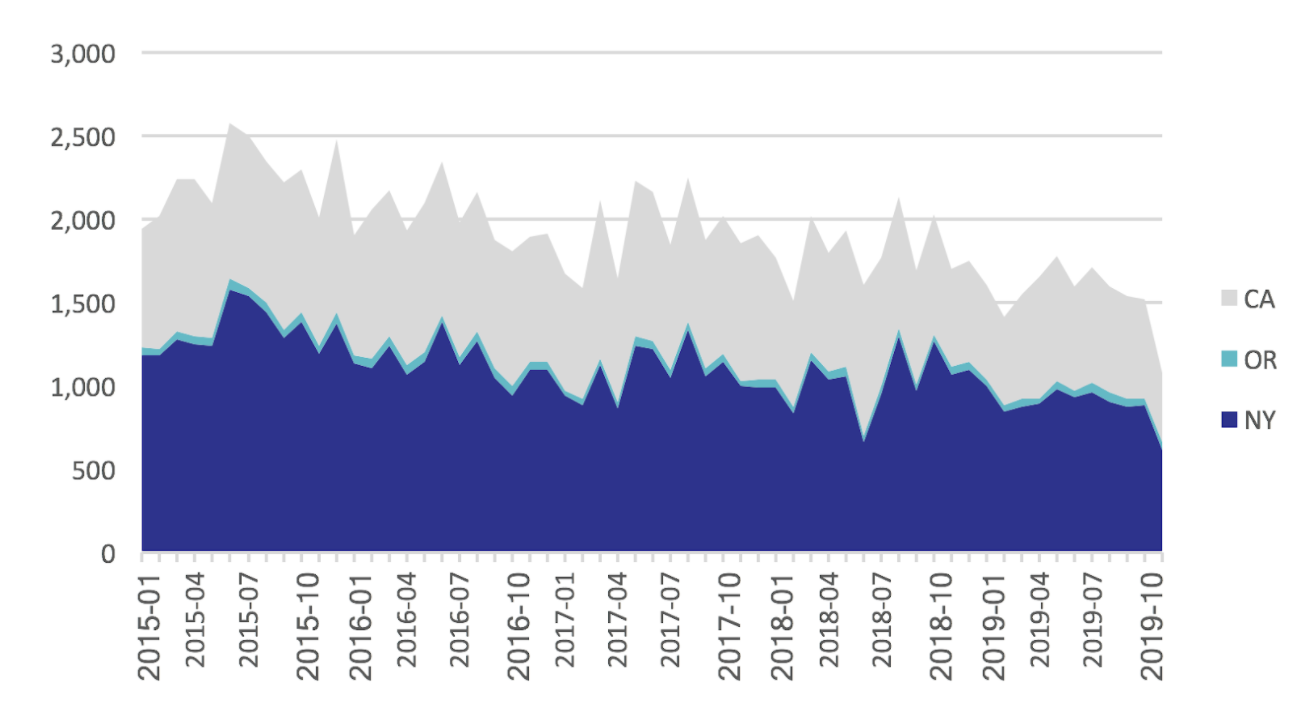 This illustrates how policies can affect markets more severely than others. What’s interesting is that the median price-per-square-foot rose, 13% in New York, 26% in Oregon, and 12% in California. One possible explanation for this is that higher quality properties remain those that sell.

The size of the building and number of affected units in the building also matter when it comes to measuring the impact of rent regulation and value. The Real Estate Board of New York created the REBNY report which tracks the value of rent regulated apartments. According to their findings, larger buildings with 11 or more rent regulated units saw a greater decrease in value— the number of transactions declined from 231 to 88 in the second half of 2019 compared to the same timeframe a year prior.

Nationwide, rent-burden has only increased over the last 20 years. According to the Joint Center for Housing Studies of Harvard University at least 30% of renters are rent-burdened in the majority of metropolitan areas. “Rent-burdened” or “cost-burdened” is defined as households paying over 30% of pre-tax income on rent. Rent-burdened households have higher eviction rates and are financially insecure in other ways. For instance, 64% of rent-burdened households had less than $400 in cash in the bank according to a 2015 PEW Charitable Trusts report. The report also found that 38% of renters were rent burdened, up 19% from 2001. Those spending 50% or more of monthly income on rent has risen by 42% from 2001 to 2015.

Wages are partly to blame. In many cities minimum-wage jobs cannot support rent. In Austin, Texas, a metropolitan area that has become a nascent technology hub, has a minimum wage of $7.25. The median rent cost has exceeded a minimum-wage worker’s monthly take-home by 143%. Even high-paying jobs, such as the technology sector, have seen rent rise faster than wages. The most egregious being in San Jose Metropolitan Area, the heart of Silicon Valley.

As the data has shown, rent control policies affect real estate markets differently around the country. A policy that may work in New York may not help Californians. It’s a delicate issue that should be monitored. But because rent regulation is largely a state and local issue, property owners and investors should follow the state and local regulations to better understand the implications of their property and portfolio.

It’s important to remember that while rent control policies may differ regionally, the effects can be felt immediately– especially when compared to other governmental policies. We saw New York’s transactional volume decrease significantly in only a quarter period, while price-per-square-foot rose, suggesting higher end properties still sold despite the new policies. The good news is with access to the right data, an owner or investors doesn’t need to wait long before they see the outcomes of this one hundred year old policy.

Recessions - Ugh!Handicapping the Retailers in a Post Stay at Home World