When Do I have a Lease?

A colleague sent an email asking me if I knew how to account for “leases that are stadium naming rights.” It was an interesting question, but confusing. A better question would be, “Are stadium naming contracts lease transactions?” An even better question that gets to the heart of the matter is “How do you know when a contract contains an embedded lease?”

Fortunately, this is a question that the boards (FASB and IASB) have spent a considerable amount of time and resources addressing, (most recently in their joint meeting on leases held on October 22, 2014). The following decision tree will help you determine when you have a lease: 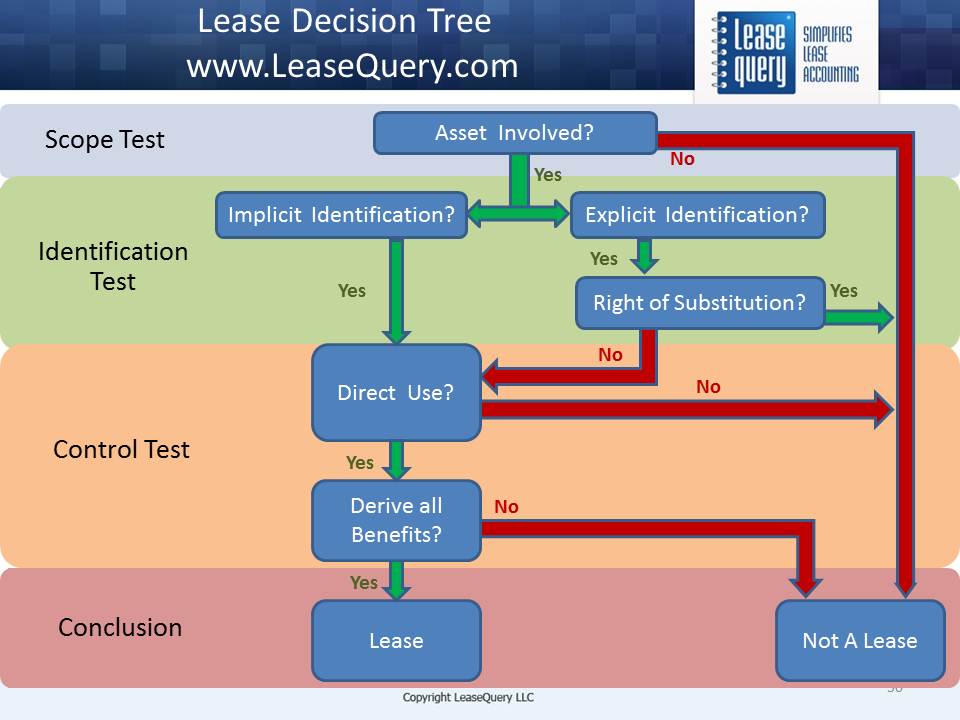 A lease exists when the following two situations are present:

1) A specific asset is identified, and

2) Control of the identified asset is transferred to the lessee.

a. An asset is deemed to be identified in a contract if the contract specifically describes or defines the physical asset to be utilized in performing the service. So if the contract states that the vendor will provide transportation services to the purchaser using a truck with vehicle number 123456789, then that truck is deemed to have been explicitely identified in the contract. Please note, however, that if the vendor has the “right of substitution,” that is, if the vendor can substitute the truck with another one without the purchaser’s consent or approval, then the truck is not really identified. Put another way, if the vendor has the ability and the right to provide the required services by using an alternative asset other than that which was specifically described in the contract, you do not have a lease. Note that Contract terms that allow or require a supplier to substitute other assets only when the underlying asset is not operating properly (e.g., a normal warranty provision) or when a technical upgrade becomes available would not create a right of substitution.

b. An asset is also deemed to be identified in a contract if the only way the vendor can fulfill its obligation under the contract is by utilizing a specific asset. This is called implicit identification. Using the transportation example above, if the vendor is required to provide transportation services to the purchaser, but only has one truck, then that truck is deemed to be identified in the contract, even if it is not mentioned at all.

Please note that the identification requirement is an “either or.” That is, an asset has to be either explicitly or implicitly identified for a lease to exist. Now that we’ve discussed identification, the second requirement that determines the existence of an embedded lease within a contract is:

2) Control: Control of an identified asset has been passed to a purchaser when the purchase can:

a. Direct the use of the identified asset and

b. Derive the benefits from the use of the identified asset.

Please note that the control requirement is “and.” That is, the purchaser has to have the ability to direct the use of the identified asset AND derive almost all of the economic benefits from the use of the asset. Let’s address these requirements individually, starting with:

So to summarize, the formula for a lease is:

Lease = Identification (Implicit or Explicit without right of substitution) + Control (Direct use AND Derive all Benefits).

Once again, here is the lease decision tree that can help you determine if you have a lease:

Now that we understand when you have a lease, let’s get back to my colleague’s question at the beginning of this blog: how to account for “leases that are stadium naming rights.” Analyzing the agreement, is there an identified asset? Most likely, stadium is specified in the contract. So yes. The identification requirement is met. Let’s move on to the second requirement: Control. Does the purchaser direct the use of the stadium? Do they say “who, what, when, and how?” The answer here is likely “No.” The purchaser of the stadium naming right does not direct the use or manage operations of the stadium. They simply pay for the right to have their name displayed. As a result, most stadium naming right contracts do not contain embedded leases.

Using document automation to your advantageIt's Not Your Grandfather's Real Estate