Virtual Reality for Real Estate is here – Are you Ready?

They may not have been, but they are now!

The August 1 edition of the RealNex Webinar Series showcased the state of the 3D Virtual Reality world together with its implications and applications for the real estate industry. The benefits were so compelling that, while only 14% of the audience had tried the technology in the past, 100% indicated immediate or near-term desire to put it to work.

The session was hosted by RealNex CEO Jeffrey Finn and featured Pix Virtual CTO and Creative Director Mike Lerg and Lead Technical Artist Chris Seher. The team shared their perspectives on how and why Virtual Reality is becoming mainstream and is set to disrupt how real estate is developed and marketed. Debunking common myths and misconceptions, the presenters shared how readily deployable and accessible the technology has become and demonstrated prevalent and advanced uses cases. They compared the current state of the industry to where social media was just a few years ago when it leapt from personal entertainment to a business medium.  VR is so pervasive, Seher noted, “You may have used Virtual Reality already and not even realized it.”

To the point, when initially polled, the audience of commercial real estate brokers, developers and operators, 50% indicated they didn’t understand the technology, while 23% believed it too costly and 14% too complicated to take advantage of it. Only 5% said they used it regularly and 9% indicated they had tried it. 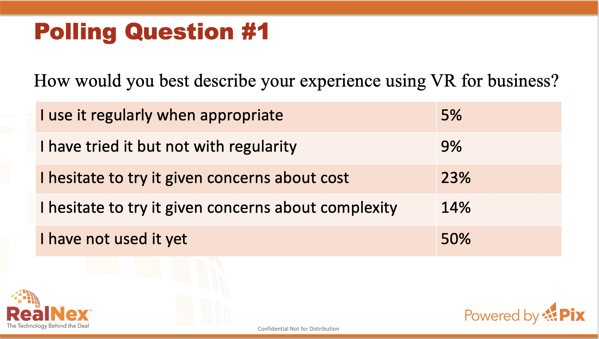 Indicative of the massive VR wave yet to come is the recent investment into the space from the likes of Facebook, Google, Microsoft among other tech industry giants. Over $8 billion has been pumped into the industry over the past 5 years, a staggering 2500% increase from the prior period. All that capital has transformed the landscape from one that was slow, cumbersome and expensive to a new era ready for mass adoption. Systems that used to cost thousands of dollars and require special facilities to display are now accessible over the web on a laptop, tablet or even in the palm of your hand on your phone. Even head mounted displays that used to cost over $1,000 can now be accessed for as little as $1 with custom branded “google cardboard” type deployment.

In the real estate industry applications abound. From architecture and engineering to construction and brokerage, the ability to visualize space before it exists helps to streamline planning and approval, eliminate waste and mistakes and accelerate marketing and move-in. Among the audience 73% saw the value in accelerating sales and leasing, 50% felt it could stimulate investment and capital raising, while 36% saw the value in the development approval and construction process. Before seeing all the potential use cases 23% remained skeptical and were unsure of how they could put it to good use. 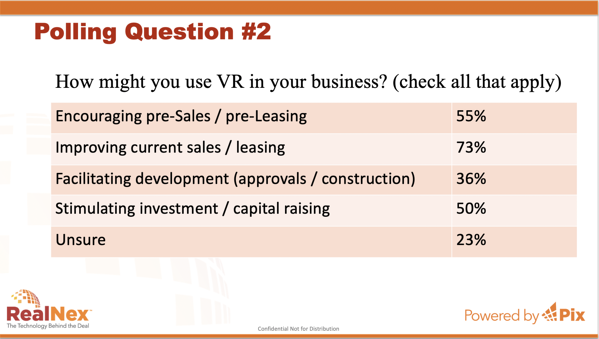 From a consumer standpoint the appetite is clear. A recent Coldwell Banker survey found that 75% of the respondents desired a virtual tour before physically looking at a space. And, 66% indicated a preference to agents that offered VR. Clearly, in our new world of instant gratification, no one has time to waste and the expectation is that real estate will be presented as quickly, completely and efficiently as possible.

From a user experience stand-point the session focused in on Passive vs Active VR. To Seher’s earlier point, many have experienced passive VR without even knowing it. Google Street View or a “Virtual Tour” would be an example. These allow users to look at videos or stitched together photos of existing property, as it exists. While serving a valuable purpose, Passive VR falls short of being immersive or interactive and is unavailable for new environments or developments where the space doesn’t yet exist. Conversely Active VR allows users to engage in “building-out” a space or selecting design elements to advance the “buy-in” process. Augmented Reality was also demonstrated. In Augmented Reality, virtual elements are overlaid on a real-world environment, while Mixed Reality combines real world environment with both Virtual and Augmented elements. 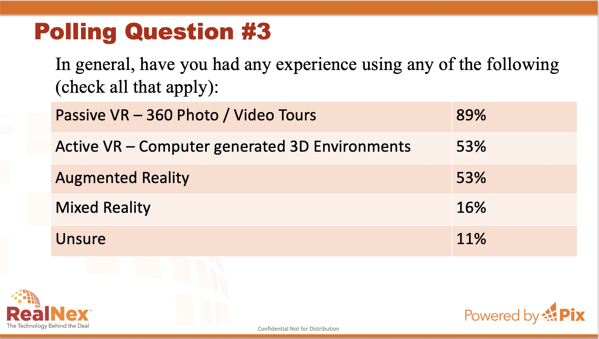 Having provided the lay of the land, the team was able to provide specific examples of how VR was brought to bear to solve real world scenarios. The first demo set featured marketing individual suites and floors to lease out new development projects. The second application showed how the application could be used on a larger scale for economic development of a downtown. The last use case was to display VR in use to collaborative “build-out” of space, adding walls and doors, furniture and finishes to create a test-fit on the fly.

Lerg noted, “We can deliver our Quicktour to accelerate lease up or pre-sales for the same cost that is typically budgeted for 2-Dimensional renderings. And, once our 3D model is built you can easily create a multitude of 2-D renderings and even create video content.” 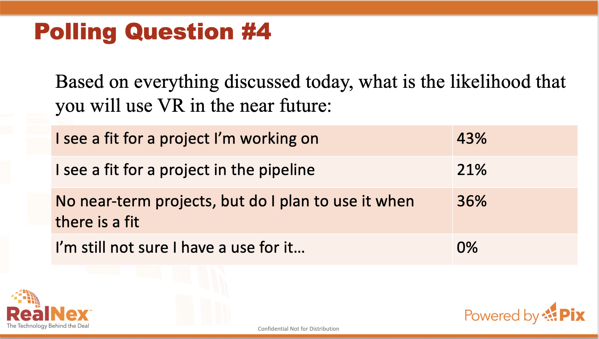 We are clearly in the early stages of adoption of VR in Real Estate. There is a still time to be an innovator and leader by bringing these tools to the market. The cost is low, deployment is easy and the pay-off is large. So, what are you waiting for? Take advantage of this compelling immersive technology today.

This blog just covered the highlights of the webinar. You may access the full session recording by clicking the following link.

To learn more about how you can take advantage of this powerful technology contact the RealNex VR team by clicking here.

How to Use Cryptocurrency With Commercial Real EstateHow to Select an SEO Company: Part 3