Over the last few years, the restaurant and retail scene in the Phoenix Metro area has seen tremendous uptick. One of the newest users to enter the market is Bush’s Chicken, a quick serve restaurant based out of Central Texas. We recently sat down with franchisee Tony Cain to discuss his expansion into the Arizona market, plans for the future of the brand, and what makes Bush’s Chicken so unique.

When and where can Arizonans see the first Bush’s Chicken openings?

The first Bush’s Chicken store outside of Texas is set to open this coming Monday, March 20th in Glendale. It’s at 73rd Avenue and Bell Road in the Arrowhead trade area. We tore down an old Native New Yorker and built a brand new restaurant from the ground up. We’re also under construction on an additional three restaurants in the Valley, with projects in Scottsdale at Scottsdale Road and Thomas Road; in Gilbert, at Williams Field Road and Val Vista Road; and in North Phoenix, at 7th Avenue and Bell Road. 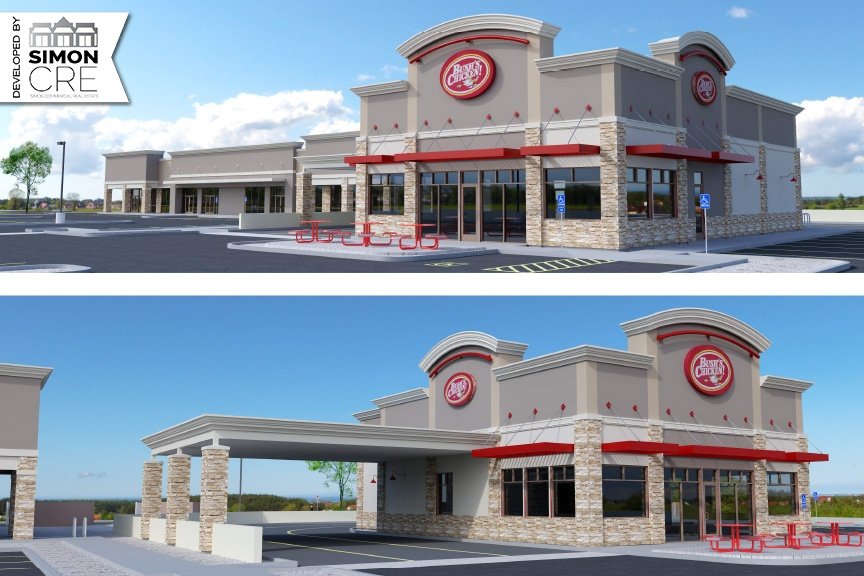 What specifically drew you to those four locations?

In terms of specific site selection, my partner and I spent the good part of 6 or 7 months driving sites in the Phoenix Metro area, finding sites that made sense, and with demographics that compared to what we have for our top-10 performing locations in Texas. What we’re really trying to hit is the middle class, and it happens to be that Phoenix probably has one of the largest middle-classes in the country. We think we’ve found those markets in Glendale, Gilbert, Scottsdale, and North Phoenix. The dynamics of those four stores will really tell us a lot about how we’re going to grow moving forward.

What made you want to break into the Arizona market?

I spent some time out here as a kid and always wanted to try to get back to Arizona; it just kind of stays with you wherever you go, so I was looking forward to it. We looked at a couple other markets like Tampa/St Petersburg and Denver. For where we are as a company Phoenix made the most sense. Distribution and supply channels are already set up in an area like this, as opposed to a place like St. Petersburg, which is 1,500 miles from Central Texas, and your distribution network just isn’t there. Plus, Phoenix is a city that attracts a lot of people from a lot of different states, so there happens to be a lot of Texans living or traveling through here.

What are your plans for continued build out in the Arizona market and do you see yourself going outside the Phoenix Metro area?

Our initial deal is to do 12 stores and hope to reach that total by 2020, so we’re already looking at targeting a couple of deals by September/October 2017. We have a few more stores that we’d like to get open by about mid-2018. I think we could eventually be in the neighborhood of 25-30 stores total within Maricopa County. My franchise agreement includes this entire county, so my plan is to stay here and build a base. There are definitely some great opportunities outside of the county, but I want to focus on this market that we’ve put the investment into. We’ve been signing 15 to 20-year deals, so we’re absolutely committed to this area. In terms of a second rollout, I really like the Ahwatukee, Tolleson, Goodyear and Queen Creek areas. Surprise also has a really interesting dynamic that I think we could continue to nurture.

What are some of the site specific challenges you’ve seen in Arizona?

Since coming to the Phoenix area, we’ve learned that there’s a drive-thru restriction on just about everything in the county. So we have to either go out and find sites that are already drive-thru approved, or factor in a lengthy process on the CUP. You don’t want to go into a site thinking that this is going to be a great 12-month opening for you, but end up spending two years on it. So now we’re really looking to try to find those sites that are already drive-thru approved in order to cut down on those timeframes. 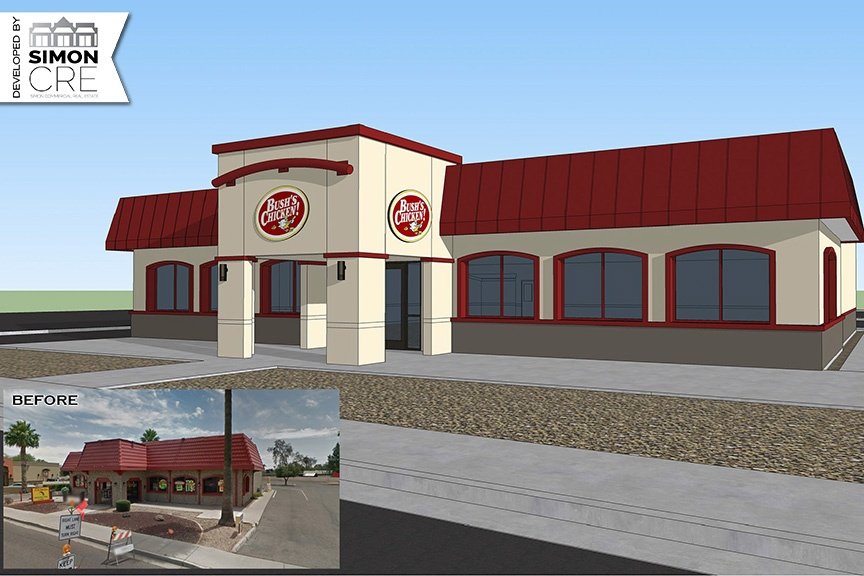 How has SimonCRE helped you meet your expansion needs?

SimonCRE is quick. They don’t let any dust gather. I was told one time by a mentor of mine, that you have to go out and do this while you still have some spunk. So I feel that by partnering with SimonCRE, we’re able to get a group of people who are very quick to pull the trigger and make a lot of magic happen for us. They really pound the pavement to push these deals out there and get them done. Time is money in both the commercial real estate and the restaurant business. By getting these projects done at a much quicker pace and on time, we’re not only able to take this money that may have been spent delaying these openings and roll them into other projects, but we’re also able to meet the commitments that we’ve made to people by opening these restaurants.

What was important to you when SELECTING a real estate broker in Arizona?

When first examining this market, I partnered up with a commercial real estate broker I worked with in San Antonio, Chris Mueller, and one of the first things he said was, “hey, we’re all part of these retail advisory groups; I know some people; Let’s go from there.” So having great real estate representation has really opened doors for us. We met with three different teams out here and asked what they could really do for us.

In terms of the decision making process, our corporate guys have a site evaluation sheet they go through. Questions such as: Who are the other competitors? What’s the retail volume? And so much more. So we’re able to take that to the broker and say “this is what I need to know; what can we do?” So they put together books on sites and all of the information you’re looking for. A lot of it came down to preparation and resources. One of the great things we got from our team, Phoenix Commercial Advisors, was that they actually flew the broker, Lance Umble, out to San Antonio to check who Bush’s Chicken really was. I think it gave them a much better understanding of what we were looking for. Having great people that understand this market has allowed us to make it happen much quicker than had we gone it alone.

From a commercial real estate aspect, what’s the biggest challenge to expanding in today’s market?

On the real estate side, I think you’re seeing the cost of commercial real estate getting much more expensive. I would say that for the past four to five years we’ve seemed to outpace the cost of commercial real estate versus what a menu price was at a restaurant. So we look at it quite simply, there’s “X” number of chickens we need to sell for us to be able to make the rent payment each month, and we’re finding that number of chickens is continually going up to be able to make that happen. But that’s the nature of the business. It’s very cyclical. You just try to make sure you’re doing the right deals, and putting good, smart real estate together in order to put your restaurants out there.

Who do you see as your competition in the restaurant business, and what do you believe separates Bush’s Chicken from that competition?

We’re sort of gauged to believe that everyone who serves food is our competition. We’re just as likely to compete for the same dollar as a hamburger user or a taco user. On the chicken side of it, we seem to compare to Popeye’s, Raising Cane’s, and Chick-fil-a. Even though we don’t necessarily have the same product mix, we find that when someone is going for chicken, they aren’t necessarily defining what that next chicken level is. Today it might be a sandwich, tomorrow it might be a bone-in thigh or breast. So we really are competing for everyone’s dollar. One of the great things that we do are the family meals we put together. You’re getting the same amount of food as if you were ordering a bunch of single meals, but doing it at a much lower price point. So the value is definitely there.

What was it that drew you to become a franchisee with Bush’s Chicken?

Keith Bush founded Bush’s Chicken in Central Texas, when he quite literally stepped off the football field and went to work in the chicken business. He’s been at it for 40 years now and he’s gotten quite good at it. Seeing how he’s been able to build the brand up with very little help or support from large companies, is quite amazing.

It’s was also kind of personal for me. So many operators, especially in the fast casual sector, started serving food that probably isn’t considered great quality. One of the things I love about Bush’s is that it’s chicken, marinated in salt, water, and spices. You can actually pronounce every ingredient in the facility. It felt good knowing that I could let the kids eat without worrying about what crazy chemicals were found in the food. But it’s also comfort food, and chicken seems to be the most popular protein that we eat in this country. So from a business standpoint, it made sense.

What is it about Bush’s three-lane drive-thru that’s so unique?

Three-lane drive-thru system is really one of the keys that allowed Bush’s to grow very early on. They were on a small site and but they had so many customers that they couldn’t serve them all fast enough. They found that a lot of people were often sitting in the drive-thru line just to order drinks. So they decided to set up a second lane for just drinks. They discovered that a lot of people coming to that lane wanted to then add more to their order than just a drink. So they then added a third lane, but again found customers wanted to add more. So they went to the three-lane drive-thru and put a server per car. The server per car format means quicker service and adds a human element to the ordering process. These servers provide product offerings and answer any questions from someone who’s never been to our establishment in a way that just can’t be done through a single speaker system.

Besides Arizona, what other states is Bush’s Chicken looking to expand to?

They’re looking to possibly expand to Louisiana, Colorado, New Mexico, and breaking into the Oklahoma area. It’s kind of like a ripple effect as people are looking into these states neighboring Texas, and then eventually moving out from there.