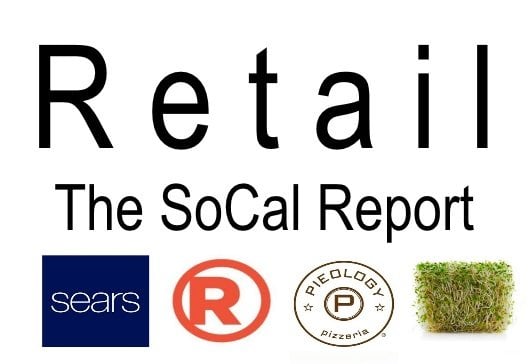 Sears Radioshack Pizza and Alfalfa? What do these have to do with commercial real estate? Plenty according to our newest blog contributor, and SoCal, cre “news scooper”, Shar Toler.

Shall we start with the good news or bad news? Bad? Good? Well, it is all relative when we are talking about Commercial Real Estate. Good news for Landlord representatives can be bad news for Tenant representatives, and vice versa. With that written, let us talk about bankruptcy.

It appears that Wet Seal may be following the path of dELiA’s sometime soon. The chatter around their water cooler is filing a Chapter 11 might be in its best interest in response to their 3Q14 numbers. I passed by their South Gate location a couple of months ago and it crossed my mind, “I thought they were dead.” Apparently I was wrong, they are not dead but are on life support with fond memories of yesteryear. In fact, I remember when they were the “next big thing” in the 90s after the decline of Clothestime. Yes, I am dating myself but I was an avid Clothestime shopper back in the day.

Keeping it retail giants, both Sears and Radioshack are still talking closures. Sears has since doubled its closing numbers from their conversation at the beginning of the year. Initially they were claiming 96, but now that we are at the end of the year, it appears that they have closed somewhere in the ballpark of 200 locations nationally. With regard to Radioshack, they are still begging permission from their Daddy (the Lenders) to close 1,100 stores. We are waiting with baited breath. Good for Tenant reps who have similar requirements, and bad for Landlord reps because their vacancy rate will be on the increase.

On the road to “good” PetSmart auctioned itself off to the highest bidder during a month long sale with the winner being a European investment firm. Word on the street is China is buying the land while Canada and Europe are buying the companies that sit on it. Too politically charged? Maybe, but it is what it is until it is not. Either way, PetSmart owners are taking $8.7B to the bank when they finish approvals early next year.

Speaking on acquisitions, Blackstone Group LP has sold all of its shares in their U.S. shopping centers to their joint-venture partner Kimco Realty Corp just shortly after purchasing all of American Realty Capital Properties Inc multi-unit centers earlier this year. It is almost like Blackstone was the middle man for this transaction since there were partners on both sides. Apparently, American Realty wants to focus on their Red Lobster purchases, and Blackstone wants to focus on its global holdings while Kimco snags 100% of those shopping center shares. Good job all around!

California-based S&W Seed Company has solid plans to buy out DuPont Pioneer’s alfalfa business. Now, I realize S&W is located in the Central Valley, but are you aware that Southern California’s Antelope Valley area has a huge alfalfa market? Yes, there is even an Alfalfa Festival and everything! Okay, maybe you do not know and maybe you do not really care, but acquisitions always mean movement in #CRE and movement is good.

Keeping the “good” vibe alive, Chandi Group USA (an umbrella company based in Mecca, CA) is the latest Hooters franchisee. Their coverage area will be the Low Desert: Coachella to Palm Springs with its first location opening in the summer of 2015. The Chandi Group has been known to purchase gas stations, fast-food franchises and car washes and broke ground on an ARCO AM/PM earlier this year in Cathedral City (known as Cat City to the locals).

The pizza scene has been exploding across the nation, and the aftermath continues with Pizza Studio opening a franchise location in Mission Viejo on Dec 17th and Compton on Dec 18th. The same franchisee has plans for 7 more in Southern California. Blaze Pizza, out of Pasadena, opened a location in Canoga Park on the 18th that is said to be its 51st. Their aggressive expansion plans have worked while Pieology, out of Rancho Santa Margarita, will be hitting location #50 by mid-January with plans to have 180 stores by the end of 2015.

Last but not least, NY-based Shleppers Moving & Storage has expansion plans for the Los Angeles area, and photo booth rental company Pixster has its eyes on Long Beach for its next location. Dive in sharks, the waters are looking great!

While you are swimming, if you are in the Southern California area, you should check out RealShare Inland Empire 2015 on January 29th. If not, I will be in Long Beach at the ACRE SoCal 2015 Economic Forecast on January 20th, in Los Angeles for the Southern California Idea Exchange on February 3rd, Las Vegas for ICSC RECon on May 17th – 20th , and at the CoreNet Global Summit on October 18th – 20th. As always, I will be listening out for the latest so I can provide my clients and you the greatest.

As the Founding Principal of Toler & Associates, Shar is a pioneer in the Commercial Real Estate industry. With expertise in Office and Retail Landlord/Tenant Representation throughout high-profiled markets, she is afforded a keen insight into the Southern California CRE scene. Prior to founding Toler & Associates she successfully performed local, national and international Landlord/Tenant Representation engagements with Cushman & Wakefield, Inc., Studley, LTB Commercial and Rosano Partners. In addition to her commercial real estate expertise, she brings a wealth of corporate and economic development knowledge from her employ with Deloitte Touche, Epson America, IBM, Nissan North America, Town of Apple Valley, the City of Grand Terrace and the Walt Disney Companies. Shar writes two bi-weekly columns for the San Bernardino American News. Follow Shar on Twitter too! @tolerandassoc