Both Samsung Electronics and China’s Huawei Technologies Co. have delivered a new twist on a familiar product—foldable screen smartphones—within days of one another.

Samsung unveiled the industry’s first mainstream foldable phone, the Galaxy Fold, on February 20, reports The Wall Street Journal. The company’s design offers a dramatic change to a longstanding design and solves one of the industry’s greatest puzzles—creating a tablet-sized phone that contains a glass display that can bend in half. 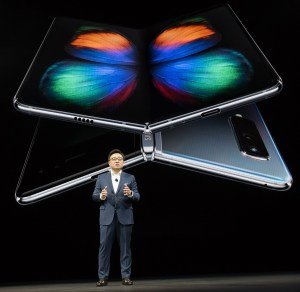 While Samsung solved the puzzle, the Galaxy Fold can close like a wallet and fit into a user’s hand, pocket or purse, the convenience comes with a significant price tag. The foldable smartphone will cost $1,980 when it’s released on April 26–$500 more than the most expensive Apple iPhone, according to The Wall Street Journal. The Galaxy Fold comprises six cameras, can operate three apps at once and measures 7.3 inches diagonally when it is opened. The phone also contains a second display on the phone’s exterior so users can do other tasks like check their emails.

D.J. Koh, head of Samsung mobile, said the Galaxy Fold is the solution to everyone who believes that innovation within the industry is at a standstill and the market is saturated.

“We’re here to prove them wrong,” he said.

A few days after Samsung had its big reveal, Huawei announced its new foldable device, the Mate X. The China-based company’s smartphone features a single-wide screen that folds in half when it is closed, according to The Wall Street Journal. Similarly to the Galaxy Fold, the Mate X will operate in “folded” and “unfolded” mode, run more than one app at a time and will be compatible with the anticipated 5G networks. Another similarity Mate X shares with the Galaxy Fold is a hefty price tag—the device will cost $2,600.

“There’s so much technology and innovation here,” Huawei head of consumer devices Richard Yu said in defense of the price.

Between the Galaxy Fold and the Mate X, the former is most likely to gain more traction in the United States. Currently, the U.S. government deems Huawei a security threat and believes its telecom equipment could be used for cyber-espionage, according to The Wall Street Journal. Telecom carriers have kept their distance from Huawei’s devices and the company had just about given up on the U.S. market. However, Huawei vehemently denies it is any kind of security threat to the U.S.

Huawei unveiled the Mate X prior to the Mobile World Conference in Barcelona. During Yu’s 30-minute presentation, comparisons to the Galaxy Fold arose. Yu pointed out that Huawei’s device is thinner than Samsung’s and its screen will be slightly larger when opened. However, while Samsung offered a concrete release date for the Galaxy Fold, Huawei was not as forthcoming about when the Mate X will be available. Yu pointed to the middle of the year as potential roll out date—pending the 5G networks rollout. Additionally, the Mate X will feature a single screen that closes into two, as opposed to the Galaxy Fold, which has two separate screens.

“This product is quite ambitious to me,” Mo Jia, an analyst at market research firm Canalys told The Wall Street Journal. “It perfectly showcases Huawei’s technological research power against its competitors.”

“This will catapult Huawei to a true leader in smartphones, proving themselves to be worthy of comparison to Apple and Samsung,” added Wayne Lam, an analyst at consulting firm IHS Markit.

Three Not So Obvious Reasons for Owning CREWho will drive the ultimate tech revolution in CRE?