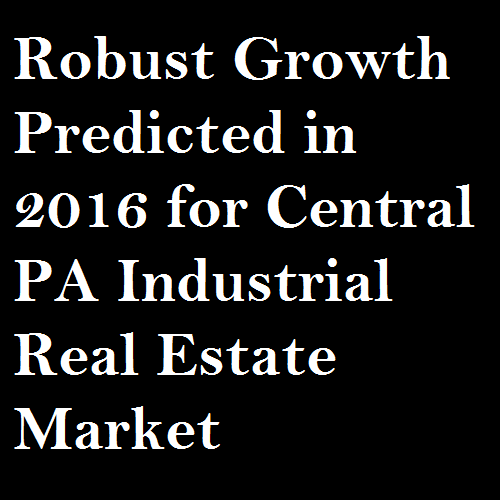 Are you ready to start off 2016 with some good news? The industrial real estate market in Central Pennsylvania is riding a wave of robust economic growth and all signs point to a continuing boom that could be the greatest in the sector’s history!

Looking at the fourth quarter data, our latest research confirms that the industrial sector of the local real estate market has now absorbed over 8.5 million square feet of warehouse space since first quarter 2015. With virtually every industrial sector experiencing increased demand—from data processing hubs to distribution space and manufacturing centers—the four quarters of 2015 saw more demand for industrial space than compared to the last 20 years.

What exactly is driving this demand and what other trends can we expect to result from this economic growth? Let’s take a look!

Employment: Across the nation, the real GDP has been expanding at a better than 4% growth rate since April of 2014 (nearly 150 bps higher than the historical norm). The faster rate of growth has triggered a burst of new hiring across nearly all job sectors and geographies. The U.S. economy created 2.9 million net new nonfarm jobs in 2014, and more specifically, industrial employment grew by 442,000 net new payrolls in 2014 – the most industrial-related job growth in 17 years.

Looking specifically at Harrisburg-Carlisle MSA, the unemployment rate is 3.5 percent as of November 2015 and the lowest it has been in recent months. We also closed the year with 294,626 nonfarm jobs which is nearly 7,500 more jobs than last year at this time and among the highest we have seen throughout 2015.

Manufacturing: Adding to the good news is the ISM Manufacturing Index, which has been in solid expansion mode for 25 consecutive quarters. Such robust trends have led to a 5.2% year-over-year increase (nationally) in industrial production—a rate of growth that went unmatched throughout the 2000’s.

Again looking locally, Harrisburg-Carlisle MSA, Lancaster MSA and York-Hanover MSA each rank among the top 10 regions in the state for manufacturing jobs. Combined, these areas (that correlate with CoStar’s Central PA submarket) employ a total 89,356 people in this industry alone, as of second quarter 2015. Manufacturing jobs continue to trend upward after recovering from a major dip in 2010. 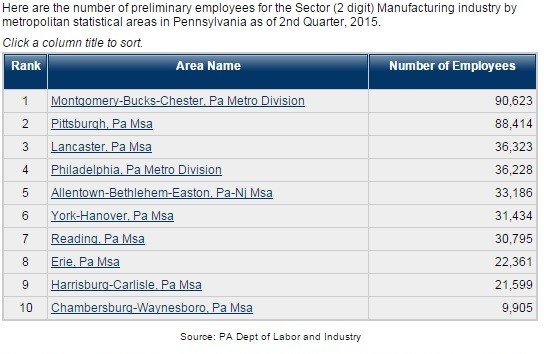 Oil Prices: The past six months of continually falling oil prices have given the bulk of the U.S. economy an additional boost and will provide another tailwind for growth moving forward. Since June of 2014, crude oil prices (WTI) have declined more than 50%, making the national average gas price $2.17 per gallon as of mid-January, 2015. Most consumers and businesses are responding favorably to the drop in energy prices, and consumer spending has ramped up for vehicle sales, durable goods, building materials, clothing and accessories, food and beverage, etc.

In the Harrisburg-Carlisle MSA, oil prices are down about 18.6 percent from last winter, beating the U.S. Energy Information Administration’s prediction of a 15 percent drop this winter. The average for heating oil was $2.999 on Dec. 1, according to the Energy Information Administration, compared with $3.683 a year ago. Local Marcellus Shale production has helped keep oil prices low while also adding jobs to the economy.

All of these factors bode well for industrial real estate, even as the rising value of the dollar and weakening economic conditions abroad present headwinds for the year ahead.

Additionally, new construction activity is showing no signs of slowing as there is currently 3.5 million square feet under construction in the Central Pennsylvania Submarket, of which 98% is being constructed on spec. The majority of new spec inventory is expected to deliver in the first quarter of 2016 and will push the overall vacancy rate northward for the market.

Despite the large amount of spec space coming online next quarter, tenant demand has been particularly strong in new inventory constructed over the past two years, evidenced by the market’s low vacancy and strong positive absorption.

The new space that has come into the market at the end of 2015 should continue this trend and generate a significant amount of activity in the near-term.

Which of the market factors discussed do you believe will be most powerful in 2016 and beyond? Join in the conversation by commenting below!