Right of Use Asset and Lease Liability under ASC 842

What is lease liability and how do you calculate it?

According to ASC 842, a lease liability is a lessee’s obligation to make the lease payments arising from a lease, measured on a discounted basis.

What is the Right of Use Asset?

The Right of Use Asset, or ROU Asset, is an asset that represents a lessee’s right to to operate, hold, or occupy a leased property, item, or piece of equipment for the lease term. It is calculated as the initial amount of the lease liability, plus lease payments made before lease commencement, plus initial direct costs, less any lease incentives. Similar to the lease liability, the initial right of use asset calculation for operating leases is identical to that of finance leases.

The ROU asset and operating leases

An operating lease is a contract that provides a lessee the right to use an asset without the benefits of ownership. Under FASB ASC 840, operating leases did not require a lease asset and liability to be recorded on the balance sheet – they didn’t meet the criteria for capitalization.

The requirements for lease classification remain largely unchanged under ASC 842, with the following changes:

ASC 842 represents a major shift in the way lessees account for their operating leases. Aside from the ability to take advantage of a policy election that would allow a lessee to account for leases with terms shorter than 12 months similar to an operating lease under ASC 840, all operating leases must be recognized on the balance sheet with a lease liability and ROU asset, calculated at initial recognition as discussed at the beginning of the article.

Note: Read a summary of everything you need to know about the new guidance on accounting for operating leases.

The ROU asset and finance leases

Accounting for finance leases under ASC 842 is largely unchanged compared to ASC 840. Under the old standard, lessees were required to record a lease asset and liability for capital leases. The same is true under the new standard.

We will highlight the differences in subsequent accounting treatment for finance and operating leases.

For operating leases, a single lease expense — also known as a rent expense — is recognized each period on a straight-line basis.

Note: Read a full example of how to create a lease liability amortization schedule.

Concerning the ROU asset, the difference between finance and operating leases lies in 1) whether or not the amortization of the asset is deemed depreciation expense and 2) the calculation of the periodic entry.

For finance leases, the ROU asset is amortized on a straight-line basis over the term of the lease. This is recognized as depreciation (or amortization) expense.

The amortization of the ROU asset for operating leases is not recognized as depreciation expense. For example, in a basic lease (without any incentives, etc), each period, the asset is reduced by the same amount as the liability reduction.

There will be no effect to the income statement, EBITDA, or debt

Under ASC 840, operating lease expense was recognized on the income statement using the straight-line method. Under 842, the lease expense will continue to be recognized as a single lease expense, straight-line meaning that the transition to the new lease standard for an operating lease will not affect the income statement. Because the lease liability expense is a single expense, interest expense is not calculated for this type of lease, and as a result EBITDA is not changed. Finally, the lease liability resulting from operating leases is not considered debt*, which means debt is also unchanged. The chart below is a simplified diagram summarizing the effect of finance and operating leases on net income, EBITDA, debt and the balance sheet.

Note: This is different from IFRS 16, which will have an impact on debt. 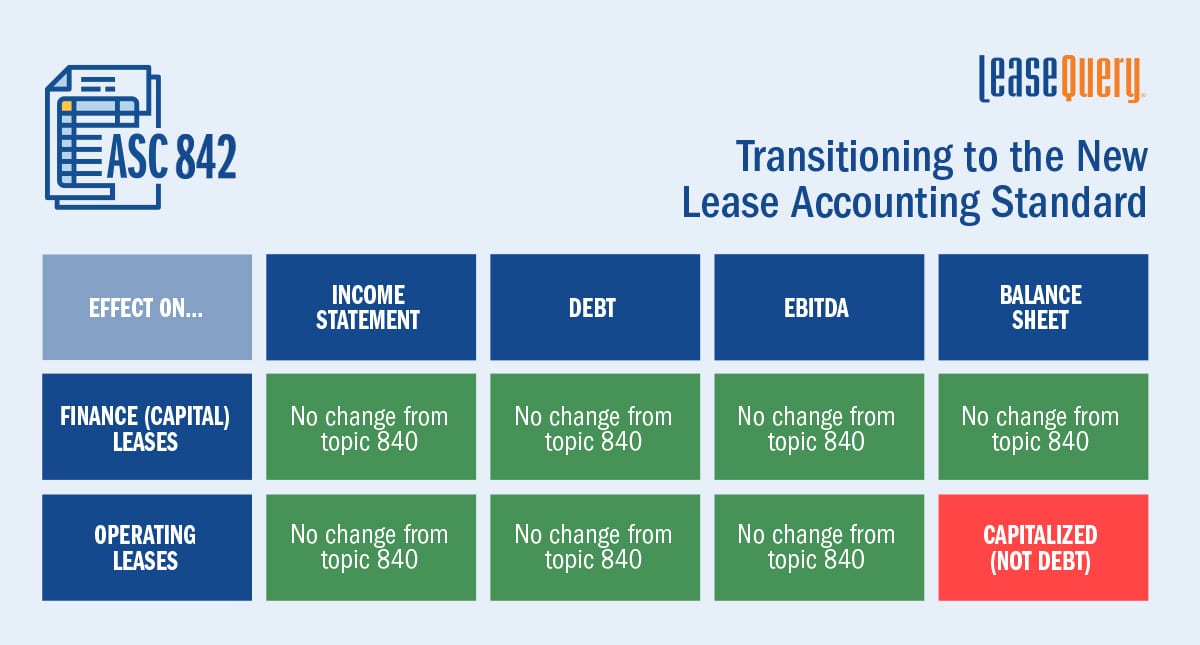 In two additional articles, we have provided full examples of the correct accounting for finance leases and operating leases under ASC 842:

This comprehensive guide on understanding the ROU asset as it relates to both finance and operating leases should help you in your future calculations. If you’re unsure what type of lease you have, we offer a number of free tools for lease accounting that can help you. To learn more, schedule a demo today.