This post originally appeared on tBL member John Orr's blog Commercial Real Estate and is republished with permission. Find out how to syndicate your content with theBrokerList. 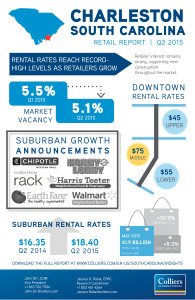 A growing residential population, improving economy, favorable demographics and tourism are supporting significant growth throughout the Charleston, South Carolina retail market. The second quarter of 2015 ended with a vacancy rate of 5.1% for the market, down from 5.5% the previous quarter.  Absorption has been limited in recent quarters given the few options for space.  Retailers want to locate along prime retail corridors with high-traffic and visibility.  As space at these desirable locations becomes increasingly difficult to find, many retailers are backfilling vacant space or signing leases for new centers, which remain under construction.  New construction coupled with increasing land and development costs are yielding higher rental rates than those seen in the past.

According to the South Carolina Department of Revenue, gross retail sales for the Charleston-North Charleston, SC MSA totaled $1.9 billion in May 2015, down slightly over the previous year but up 5.3% from May 2013.  Charleston County accounts for 65.7% of the MSA’s gross retail sales and reported total sales of $1.3 billion in May 2015.     Sales in Dorchester County increased 24.0% from May 2014 to May 2015 and 33.4% since May 2012.  Over the past year, a growth in residential development has generated a greater demand for retail services in Dorchester County.

Downtown Charleston, specifically King Street, remains a popular destination for tourists and locals alike.  The entertainment district, full of restaurants, dessert cafes, bars and boutiques, is growing increasingly dense with limited options remaining for tenants looking for space.  Several spaces were vacated during the second quarter of 2015, but quickly backfilled as demand far exceeds available space.  The vacancy rate was 3.3% for the Downtown submarket at mid-year 2015.  Strong competition among retailers is driving up rental rates to levels never before seen in the submarket.  At mid-year 2015, asking rates for shop space along King Street averaged $52.20 NNN.

Demand is strong for suburban retail space as the area’s residential population grows.  Recent job announcements from Volvo and Mercedes-Benz Vans will bring 5,300 new jobs to the area over the next decade.  A larger residential population and labor force means  greater disposable income and more demand for retail services.  Grocers and restaurants are responding by expanding their footprints in the market.

Strong interest and activity in the suburban retail submarket contributed a vacancy rate of 5.2% at the end of the second quarter of 2015, down from 5.5% the previous quarter and 6.7% one year ago.  Given the limited options for space, retailers are finding themselves competing for preferred locations while new construction and redevelopment activity gains momentum to meet retailers’ needs.

The Charleston retail market is poised for continued success given the region’s strong tourism industry, improving economy and labor market and growing residential population.  Vacancy is expected to decline further as demand for space grows.  Land and construction costs are rising, which will further contribute to climbing rental rates.  Investment sales are likely given the tight market and current low interest rates.

Retail development is on the rise throughout South Carolina with new ground-up construction and redevelopments.  Retailers are expanding their footprints and entering new markets with multiple planned locations.

Hi, I'm John Orr, CCIM. I have over 25 years of experience in Commercial Real Estate. I have done or seen most everything from multiple perspectives - Landlord and Tenant, Buyer and Seller, Lender and Borrower, Developer, Manager and Contractor. Of all these roles, the most rewarding is that of Retail Strategist. I am the Vice President of Retail at Colliers International in Charleston SC. This role is so exciting to me because of the people. There is a great energy, international perspectives on local issues and a wealth of knowledge to draw from. In this capacity I manage the third party retail throughout the Coastal Region of South Carolina. My primary focus is Landlord (Owner / Seller) Services including Leasing, Sales, Property Management Services and Asset Strategies for individual properties, as well as Complete Portfolios. My other major responsibility is that of Tenant Representation (User / Buyer) Advocate for a select group of unique Retailers and Restaurants. If you have any questions about Commercial Real Estate please give me a call or drop me a note. I am always happy to help in any way I can. Visit my blog John Orr Commercial Real Estate and follow me on Twitter @JohnOrrCCIM.