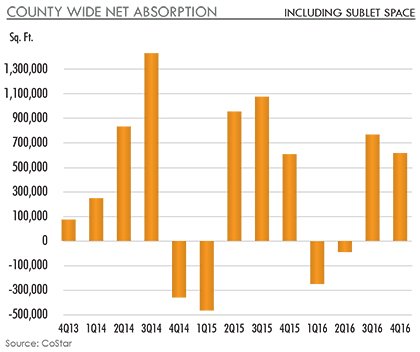 Despite a greater than expected drop in leasing activity in the fourth quarter of 2016, demand for space remained strong enough to drive down the industrial vacancy rate deeper into record territory in each of the county’s four submarkets.

Historically, the volume of commercial real estate transactions drops off at the end of each calendar year, particularly so when there is the added uncertainty of a general election. But the 402 leases in Q4 totaled 32.6% less than the 597 average of fourth-quarter deals since 2011. Moreover, there were 36.6% fewer deals in Q4 than the 634 transactions in Q4 2012, when the previous election was held.

Among the county’s four broad submarkets, whose inventories total more than 278 million sq. ft., demand has been greatest in West County. Net absorption in the last three quarters totaled more than 1 million sq. ft., driving West County’s vacancy rate down to 1.1%. Lee & Associates specialists in the field attribute West County’s strong absorption to the eight-city submarket’s comparatively low lease rates and its proximity to the 405 Freeway, the commerce-dense South Bay market and twin ports of Long Beach and Los Angeles.

The North County submarket, the county’s largest with 42% of OC’s total 278-million-sq.-ft. inventory, posted 478,156 sq. ft. of positive absorption in 2016, closing out the year with a 2% vacancy rate. North County has lost 1.36 million sq. ft. of space largely to multifamily development since 2008. Lately, Shopoff Realty is angling to raze a nearly 400,000-sq.-ft. building in Anaheim to redevelop the 20-acre property on South Street near city hall with 530 homes and apartments. On the flip side, Western Realco has filed plans to develop an eight-building, 978,665-sq.-ft. project on the former Beckman headquarters site in Fullerton.

How Long Does It Take For Commercial Real Estate to Sell?[Webinar] Lead Generation Widgets Powered by TheAnalyst PRO