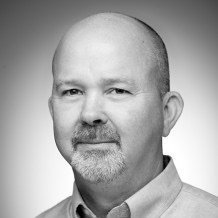 
In the 30s, 40s, and 50s multifamily construction activity in Denver was fairly widespread. Of course this is a 30-year period, but you can see several pockets of concentration as opposed to one dominant area (the latter of which is common in many metro areas in this time frame). 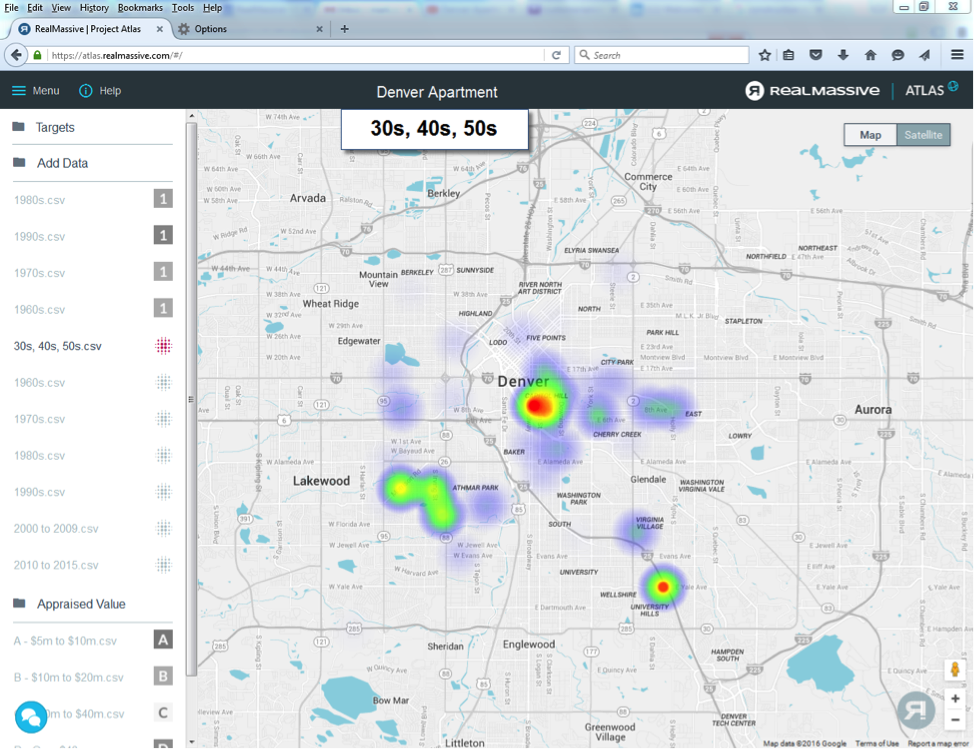 The 60’s follow a similar pattern with a little less dispersion and more concentration downtown and south, but the 70s, 80s, and 90s show fairly dispersed activity with no one highly favored area of concentration. 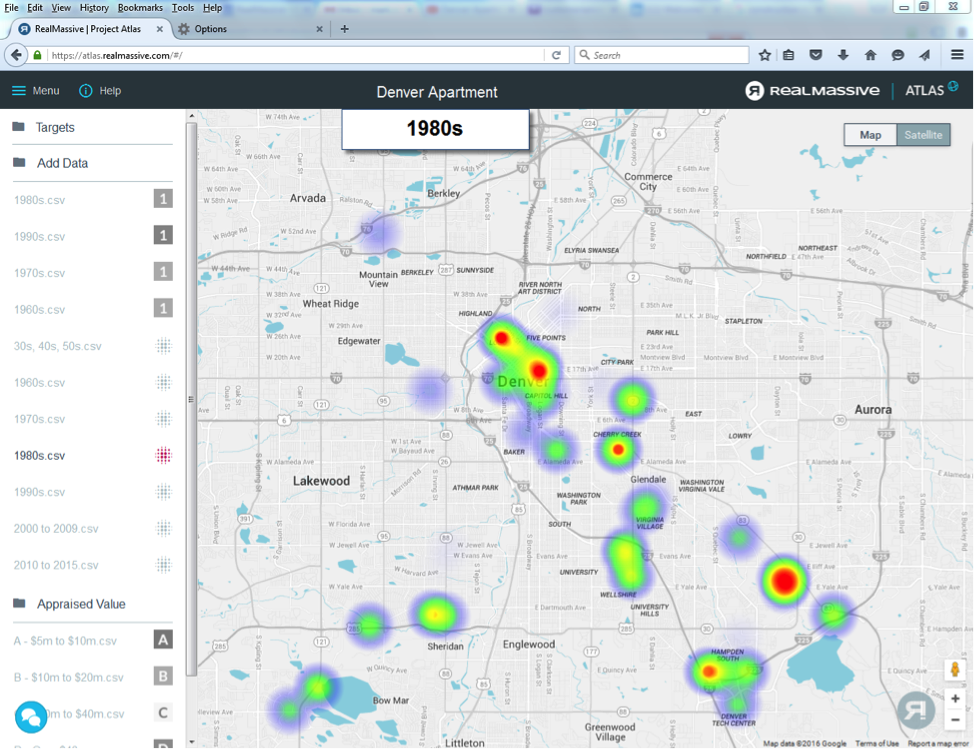 This changes in the early 2000s and a building boom begins to take a foothold in the LoDo area, with other areas of concentration south of downtown. This 2000 to 2009 period represents 91 apartment buildings over $3 million in current appraised value (includes mixed-use). In the 1990s, that number was only 24. 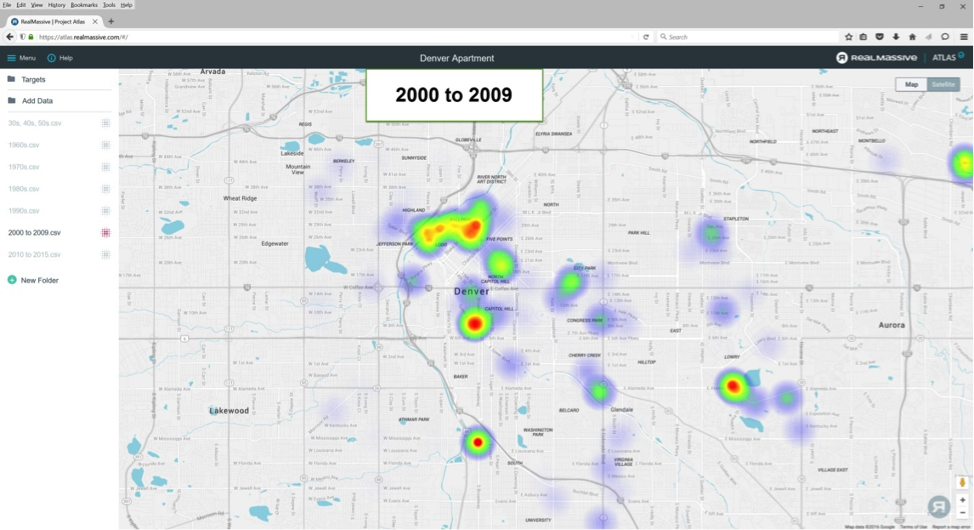 This trend has become even more pronounced in the years since 2010.

Another interesting visualization concerns viewing individual buildings to look for clusters of high- or low- appraisal valuations. The rotating image below shows blue squares for apartments valued between $5 million and $10 million, green is $10 million to $20 million, yellow is $20 million to $40 million and red is properties valued at more than $40 million. You can clearly see how the first two tiers cluster around central Denver while the higher tiers cluster more in the LoDo/Ballpark area.

Tiers A & B Central 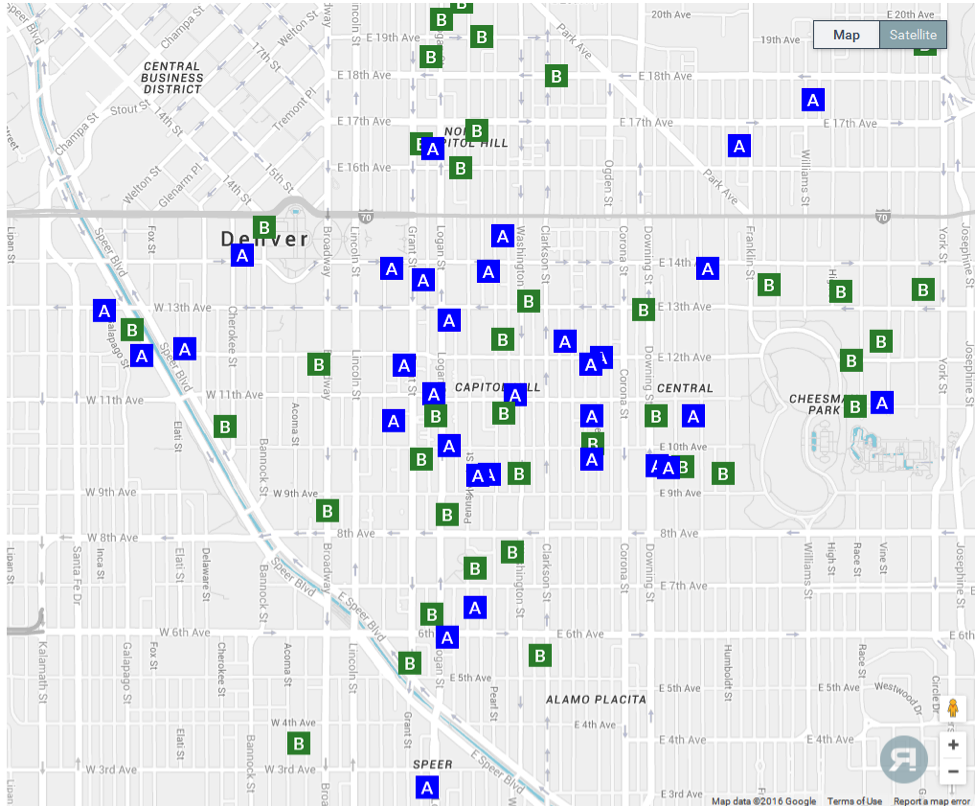 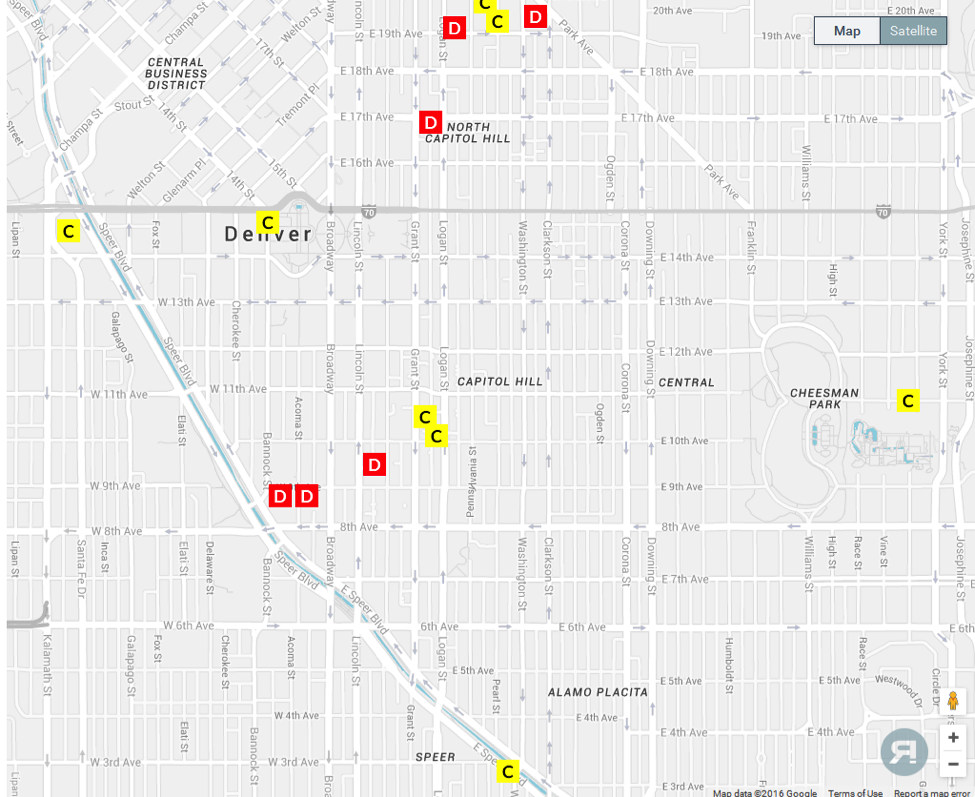 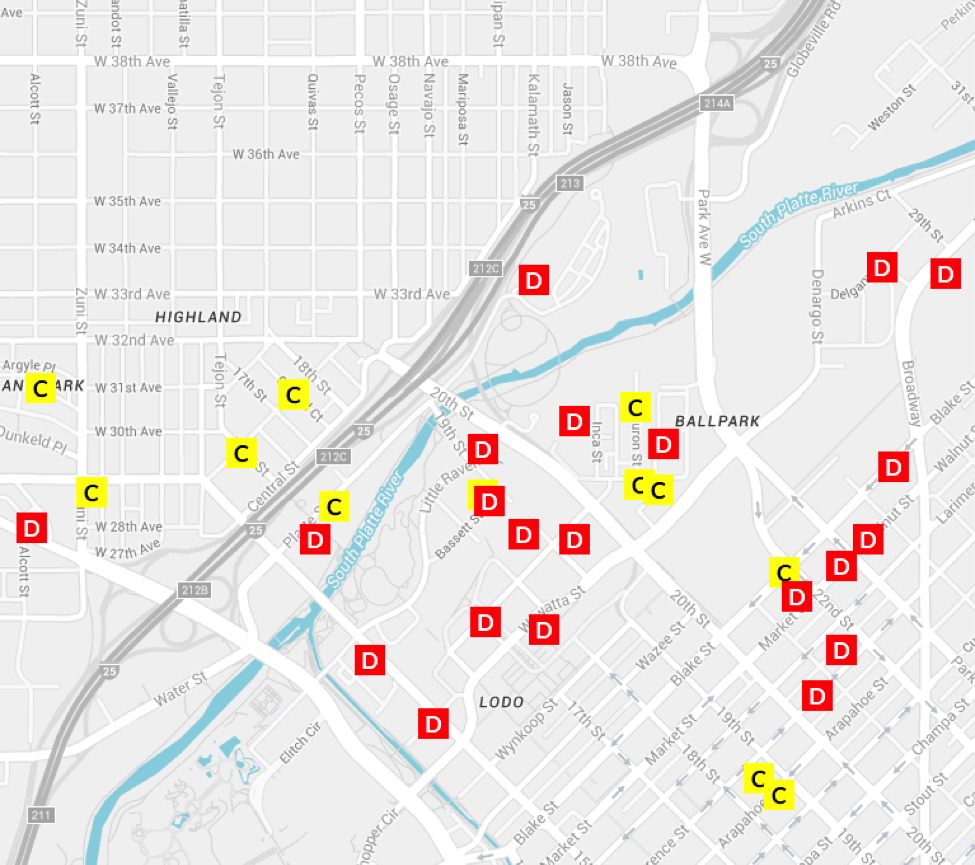 Tiers A & B LoDo / Ballpark 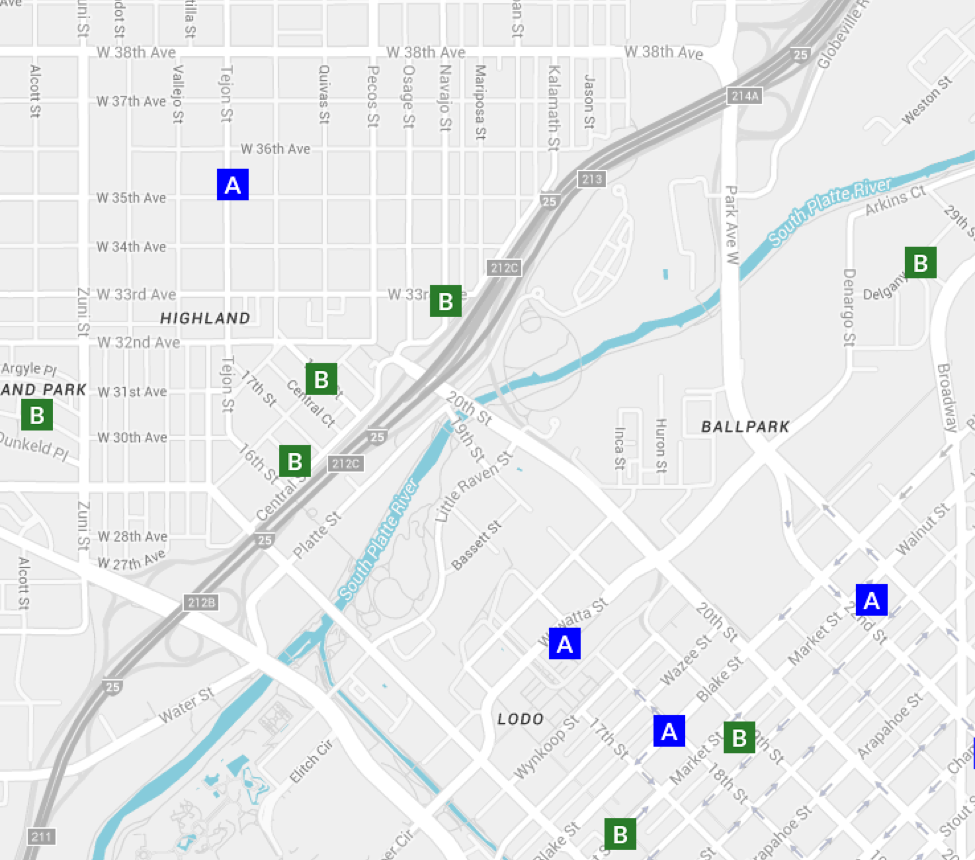 We can take a look at the satellite and street view images of these neighborhoods and buildings and see that there are a considerable number of units already in place and being delivered in this area. 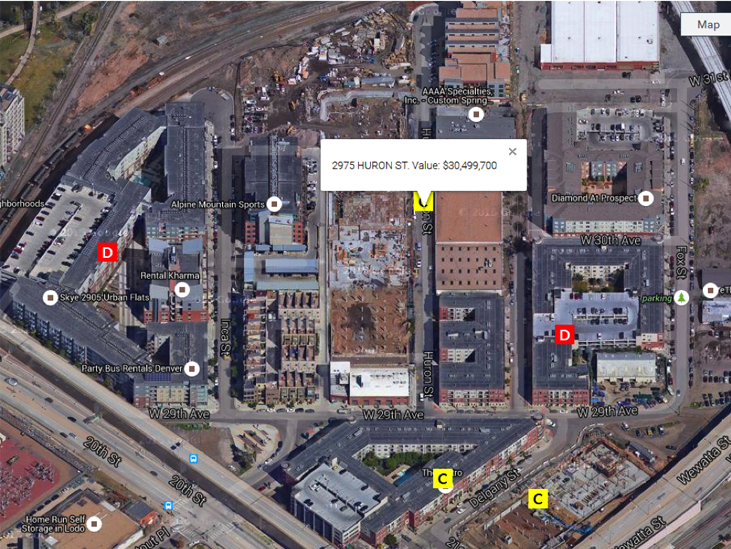 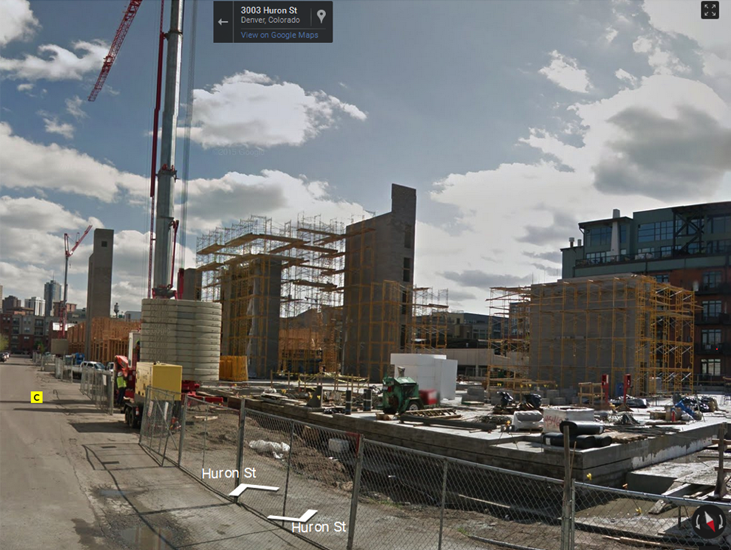 View the Entire Progression by Decade

This data was compiled using tax records as made available by Denver Assessor’s Office. Maps provided courtesy of Project Atlas. Project Atlas comes pre-loaded with historical construction activity and current appraised values for commercial property types in your markets. Click Here for more information on how you can use Project Atlas, or send an email to [email protected].