Opportunity Adjacent: How to Invest in Opp Zones Outside Major Markets

We’ve already looked at investing in Opportunity Zones in major U.S. markets. But how does an investor capitalize on the areas that sit adjacent to those markets, that are also likely to see heightened investment?

Here, we’re going to look at exactly that, while giving general statistics and overviews of each market.

In this article, see how to invest in markets adjacent to:

For many commercial investors, the only deterrent to investing in Opportunity Zones is a lack of knowledge about them.

In short, Opportunity Zones are everywhere. They’re in every state nationwide (non-contiguous states included), in distressed, designated census tracts that are most in need of redevelopment.

The issue, however, is that a lot of these areas still carry a great deal of risk for investors, even with the potential long-term savings from the program.

So, while investors flock to major markets, there is also a great deal of opportunity lying dormant just outside them, in nearby, still-low-risk investment areas. It’s simply a matter of finding the right properties.

How to Invest in Opportunity Zones Adjacent to Major Markets

Naturally, the smaller a market is, the more difficult it is to find preferable investment opportunities within it.

Markets adjacent to New York, Los Angeles, and Houston, to name a few, benefit tremendously from being near those cities, but can still be a bit harder to search for investments—unless you have the right resources.

The only way to currently search nationally for commercial properties within Opportunity Zones is by using Reonomy OffMarket.

With a Reonomy property search, you can easily add filters to search only for commercial property that sits within a Qualified Opportunity Zone—for any commercial asset type, in any state, city, or county in the contiguous U.S.

Search for properties with a specific transaction history, specific ownership details, and much more.

Learn a bit more about running a property search below:

Once you identify properties, you can see their sales history, ownership details and owner contact information individually.

You can even dive into an owner’s full portfolio to see if they own multiple properties in QOZs and analyze those properties.

See how to do that below:

From there, all you would need to do is find a Qualified Opportunity Zone Fund, and you’d be off and running.

So now, knowing how to search, let’s look at some of the intricate markets that carry the risk of much larger markets.

New York City is of course one of the largest commercial real estate markets in the country. So naturally, Opp Zone or not, a fair amount of commercial investment is going to leak outside the city.

The eastern portion of New Jersey serves as the most obvious example.

As NYC commuters continue to move outside the city given rising rent costs, cities like Hoboken, Jersey City, and Newark have moved to turn their own downtowns into popular residential areas.

While Hoboken does not have any designated QOZs, given its smaller size, Newark and Jersey City are nice alternatives to New York for investing in OZs.

Newark, NJ has been in rebuild mode since 1967, when riots overtook the city and left its real estate market a bit depleted for much of the remainder of the 20th century.

There are more than 15,000 commercial properties in Newark. Of those properties, nearly a third (roughly 28%) are located in Qualified Opportunity Zones (4,200 in total). 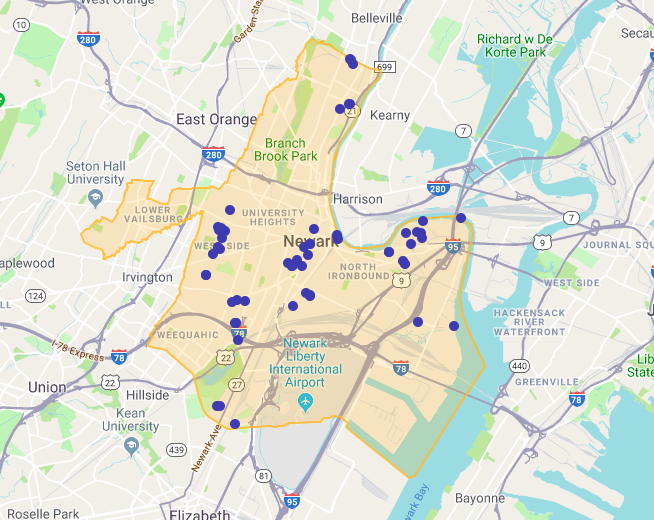 With such a high percentage of properties in Opportunity Zones, the options in Newark are aplenty.

There are more than 11,000 commercial properties in Jersey City, which, like Hoboken, is growing in popularity amongst NYC commuters.

Similar to Hoboken, Jersey City’s historic downtown, and areas along the Waterfront, like Newport, are more developed and therefore do not have any Opportunity Zones.

Outside of those areas, 2,300 of Jersey City’s commercial properties are located within Opportunity Zones. 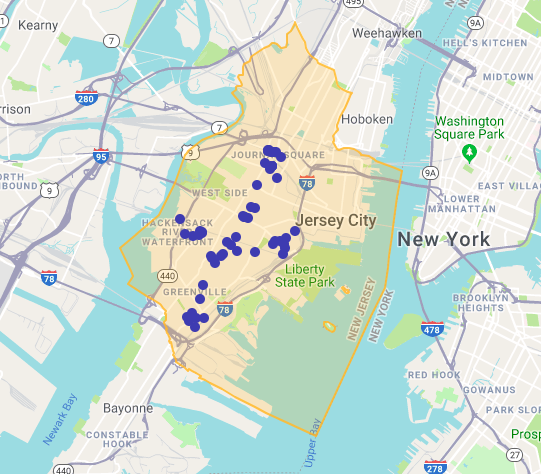 The city’s accessibility to the PATH train creates an easy commute for those that work in NYC, while proving development hope for the foreseeable future.

Another section of New Jersey where investors can take advantage of Opportunity Zone investment is outside of Philadelphia–notably, in the city of Camden.

Camden has more than 12,000 commercial properties in total, of which a high percentage (roughly 42%) are classified as vacant land.

Of those total properties, more than 5,000 are located in QOZs. Almost 2,000 of those OZ parcels are vacant land.

Camden’s Opportunity Zone properties are pretty spread out, stretching all the way to Cooper Point and the waterfront, which sit just across the bridge from Philadelphia. 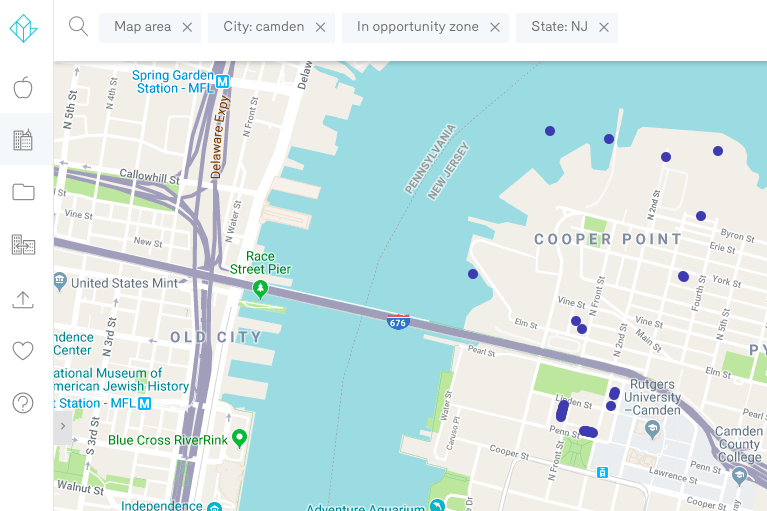 Given Washington D.C.’s unique location in between a few states, there is quite a bit of adjacent opportunity for investors.

In both Virginia and Maryland, Opportunity Zone investments can be found that sit within a short distance of Washington D.C.

In cities like Arlington and Alexandria, investors/developers can look for Southwest adjacent properties to Washington.

Arlington has 9,000 commercial properties, almost 700 of which are located in Qualified Opportunity Zones. A great deal of those parcels are residential vacant land in the neighborhood of Nauck, Arlington.

Alexandria, on the other hand, has 4,200 commercial properties, 230 of which sit in QOZs.

While the quantities are not as grand as some other markets, opportunity still shines through in the ability to develop residential properties in a city of almost 700,000 people.

On the eastern side of D.C., running down its border, spanning from the National Harbor up to Pepper Mill Village, MD, there are more than 2,500 commercial properties within Opportunity Zones.

Add in the surrounding areas of Silver Spring, Hyattsville, and the remainder of what lies just north of Washington D.C., and the total number of city-adjacent Opportunity Zone properties in Maryland exceeds 5,000. 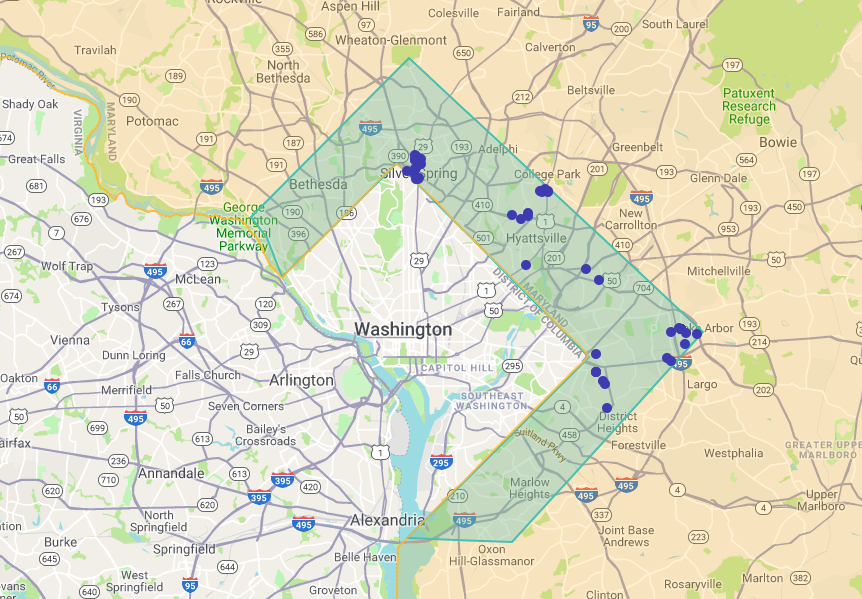 Chicago, another one of the largest commercial real estate markets in the nation, has 133 Opportunity Zones itself.

Sitting just outside the city, however, are as many as 30,000 commercial properties sitting in Opportunity Zones.

Roughly one-third of those parcels are vacant land, half of which are residential vacant land. About 1,500 of its OZ properties are industrial, and 6,500 are multifamily homes. 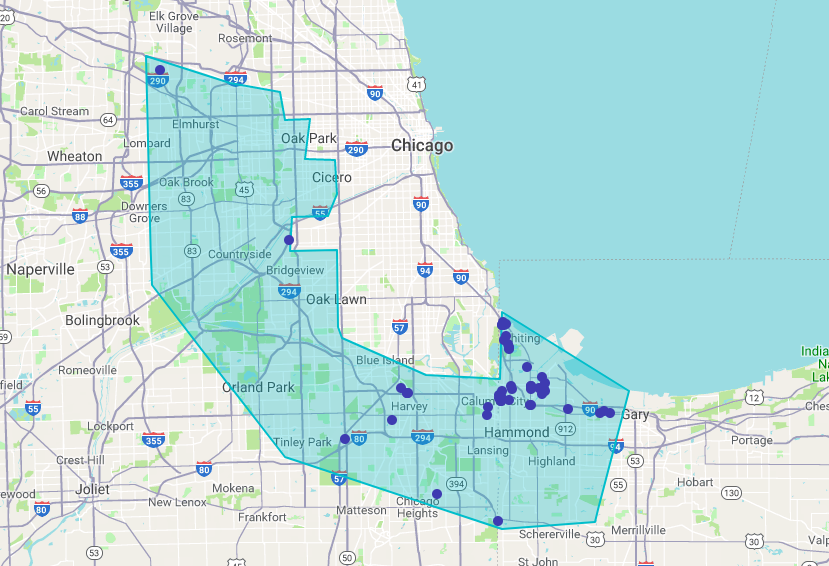 Many of the Opportunity Zone properties outside of Chicago sit near or on the border of Illinois and Indiana, in cities like Calumet City and East Chicago, IN.

Whether you’re looking for Opportunity Zones on or off the shore, there are plenty of advantageous areas surrounding the volumous city of Los Angeles.

Even when going outside of Anaheim and Irvine, there are 66,000 properties, most of which (40,000) unsurprisingly are vacant land. 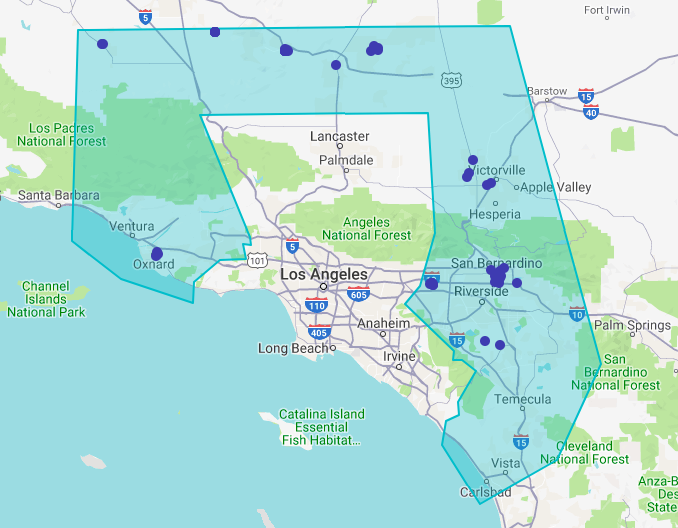 In the Anaheim/Santa Ana/Irvine section of California, there are nearly 8,000 commercial properties in Opportunity Zones. 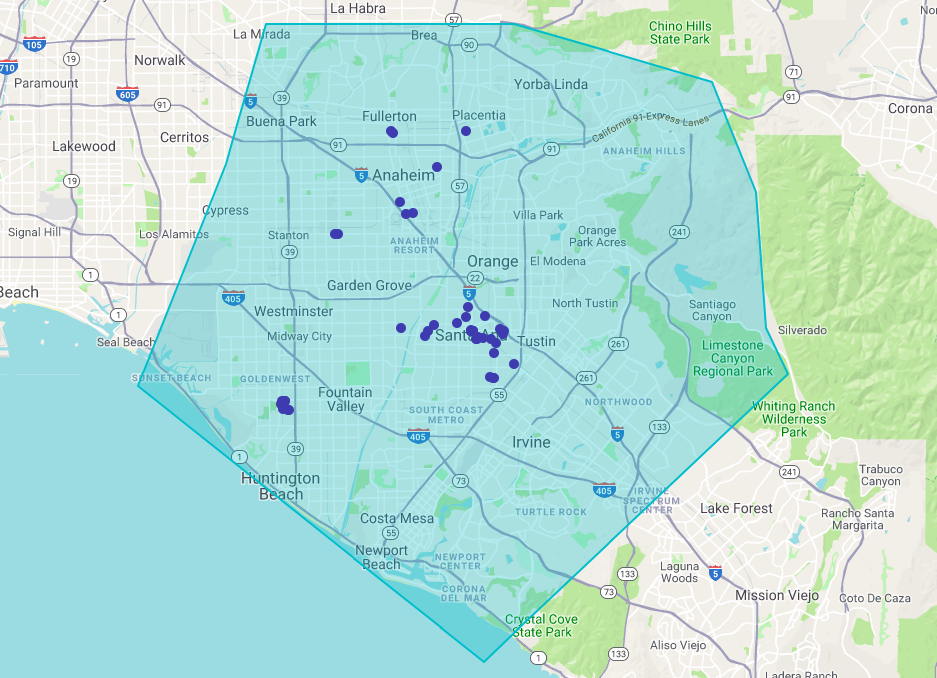 A good portion of those properties are made up of multifamily (2,500) and industrial properties (2,000), both of which remain sought-after commodities in commercial real estate nationally.

Just north of Los Angeles sits the city of Lancaster. While a bit more detached from LA compared to Anaheim, the city itself offers more than 2,000 commercial properties within Opportunity Zones.

North, but along the coast of California is the city of Oxnard, which also has close to 2,000 commercial Opportunity Zone properties for investors to take advantage of.

Oxnard presents a shoreline option for those looking to invest near Los Angeles.

The Los Angeles Metropolitan Statistical Area has about 13 million residents, making its commercial real estate market one of great diversity and prevalence.

These smaller cities make for a great way for investors to avoid the heavy competition of inner-city-LA’s market while still capitalizing on the city’s prominence and the benefits of OZs.

In the surrounding areas of inner-city Houston, there are nearly 120,000 commercial properties in Opportunity Zones. 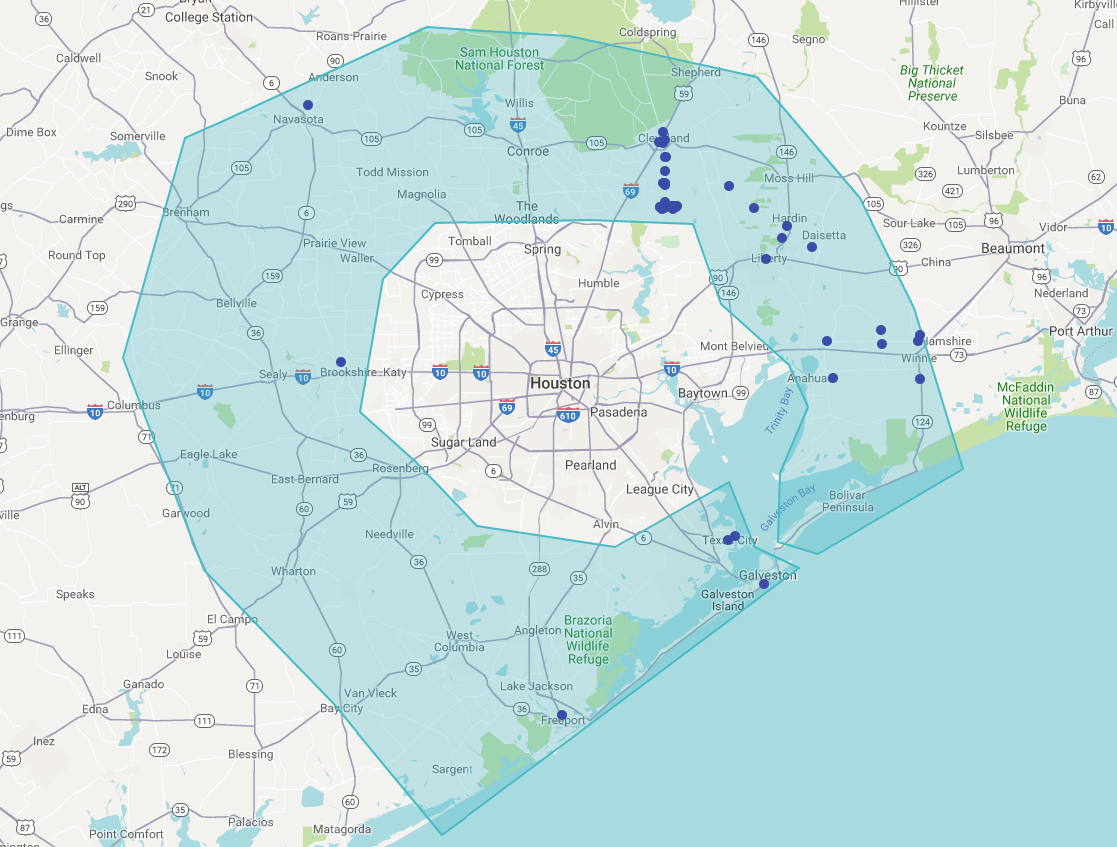 Many of the properties can be found in the city of Plum Grove, east of Houston surrounding and beyond Lake Anahuac, and south of Houston in La Marque and Texas City.

Of the full lot of 120,000 properties, more than 80,000 are classified as vacant land (39,000 residential vacant land). The spread of office buildings, multifamily, industrial, and general commercial is spread out fairly evenly.

The Houston MSA is the fifth most populated in the United States, and Harris County the third most populous county. Given the space and density of Houston and its surrounding areas, there is a vast amount of opportunity in and outside of the city.

Many of the nation’s Qualified Opportunity Zone Funds (QOFs) have either a multifamily or Northeast focus (or both). This is where New Jersey, Maryland, and Virginia’s smaller markets benefit with regards to Opp Zone investment.

National Opportunity Zone funds include Fundrise and EquityMultiple, which can likely be used to invest in any of the areas we’ve mentioned in this post.

You can also visit the NCSHA’s full-list of Opportunity Zone Funds across the country to find more localized or regional QOFs, or funds that are more specifically aimed at certain asset types.

The preference by many would likely be to self-certify as a QOF, which can be done by filling out the IRS 8996 form. The form also serves to prove that each fund met the appropriate investment standards within the tax year at-hand.

With a self-certification and Reonomy as a search tool, you can be talking directly to Opportunity Zone property owners within minutes.

Other than using Reonomy, or just to see where Opportunity Zones lie in these areas, there are a variety of mapping tools you can use.

These mapping tools give you general insights and information about each census tract and the populations that live within them.

When it comes to commercial real estate investment, however, Reonomy is the only tool that can provide the search customization, property and ownership information necessary to make sound investment decisions in these very high-value zones. 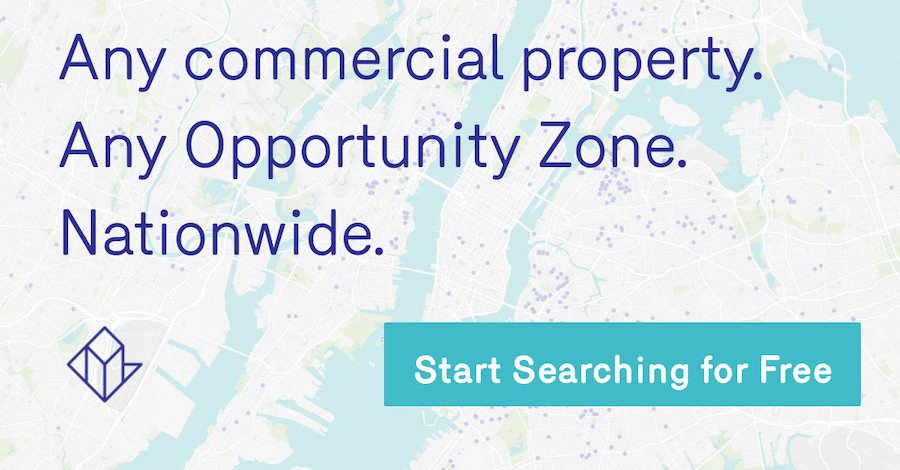