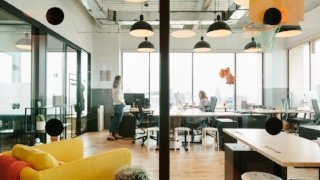 Commercial real estate brokers generally are not threatened by WeWork and the overall co-working trend, according to the latest Apto National Broker Buzz Poll, which was conducted the week of August 20.

The poll asked specifically: “How much of a threat is WeWork to the CRE brokerage business?” Here’s how brokers responded:

Brokers also were asked how concerned they are that tenants, over time, will opt for co-working space versus traditional lease or sub-lease space. Here’s how brokers responded:

Commenting on the poll results, Tanner McGraw, Apto’s founder and chief strategy officer, said, “For all the attention WeWork gets as a disruptor shaking up how people think about work, commercial real estate brokers don’t see coworking as a particularly big threat to either the brokerage business or the traditional model of real estate space occupancy.

“On some level WeWork may represent more of an existential threat — and a reminder that the only constant in business is change, and that we should never be complacent with any of our approaches to business.”

Specifically, the poll asked: “How interested are you as a broker in small lease transactions?”

“As the poll results demonstrate, WeWork’s market opportunity appears strongest relative to small businesses, particularly tenants with space requirements under 2,000 square feet. Brokers have historically been less interested in these deals, which has contributed to WeWork’s rise as a player in that market.”

Thanks to those members of the commercial real estate brokerage community who participated in the poll, which included Apto customers and non-customers.