This post originally appeared on NAI Isaac's Blog and is republished with permission. Find out how to syndicate your content with theBrokerList. 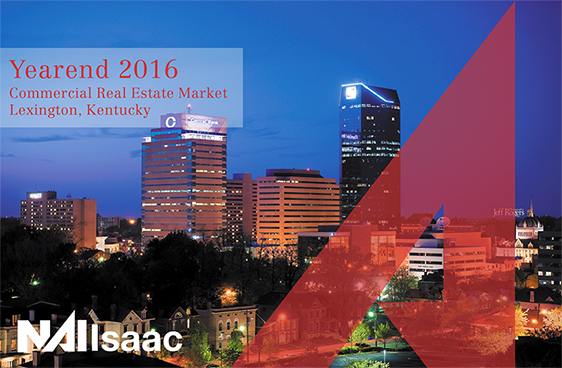 YEAREND 2016
The Lexington Kentucky commercial real estate market remained active during 2016 with notable vacancy decreases in Suburban and Central Business District (CBD) office sectors and vacancy increases in Retail and Industrial sectors.  Suburban Office experienced the largest vacancy decrease with a decline of 23.4%, resulting in a vacancy rate of 10.51%. The CBD Office category experienced a 10% vacancy rate decrease, a positive indication for the downtown Lexington area.  Leasing activity and market rental rates for all commercial sectors have remained steady throughout 2016. This report surveys Class A & B properties that are 10,000 square feet and larger.  NAI Isaac compiled and analyzed data on approximately 528 commercial properties representing over 32 million square feet of office, retail and industrial premises.
2017 FORECAST
Leasing activity should continue to increase in the first two quarters of 2017 with positive absorption anticipated for all sectors.  Rental rates will continue to be stable in the CBD Office, Suburban Office, Retail and Industrial sectors with demand also remaining constant.  The vacancy rate for Suburban Office will increase as some large blocks of previously occupied space become available.
2016 Year in Review
2016 was a dynamic year for the Lexington Commercial Real Estate Market.  All indicators of economic growth improved during 2016 which assisted the CBD Office and Suburban Office in reducing vacancy and minimized the Industrial and Retail vacancy increase.  The Retail and Industrial markets vacancy rates are still very low.

NAI Isaac Commercial Properties is a Lexington, Kentucky-based firm specializing in the leasing, sale and management of commercial real estate in the Commonwealth of Kentucky with over 8,000,000 square feet of retail, office and industrial properties exclusively listed. NAI Isaac features a staff of experienced professionals specializing in the property management, leasing, acquisition or disposition of office, retail, and industrial properties, as well as development and investment opportunities.