I Met the Strikeout King and It Was Me 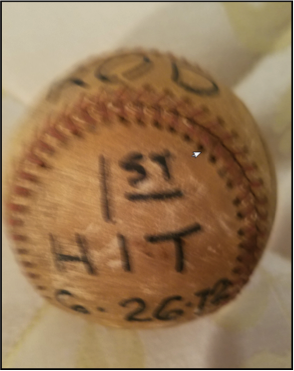 There was a scene from the classic 1976 baseball movie, The Bad News Bears, where the small scrawny kid, I think his name was Lupus, would come to bat and there would be a massive groan exhaled by everyone at the game. All the parents groaned, the players on his own team groaned, his coach reluctantly had to play him. You see, Lupus was the strikeout king. He never got a hit, albeit he did make a big catch in the big game – but that’s just in the movies.

Just 4 years earlier, at the tender age of 9, I was “Lupus” on my little league team. I only played because my dad started the league in our district some 4 years earlier. So basically, I had to play. To the disbelief of my coaches, my teammates, and even my brother – who was the star of our team – I had to play.

Now, I enjoyed being around people and playing sports, I just didn’t enjoy going to bat. Who would? Each time I tried, it was only a matter of how quickly I would strike out. Heck, I even think the parents were making bets on how many pitches it would take for me to fail to get a hit. My best play up to that point in the season was actually getting hit by a pitch! “Way to go Rod,” my coach would yell as I was undoubted crying as I limped down to first base; but heck I got to first base.

Then something miraculous happened on June 26, 1972. It’s was probably our 10th game, although it felt like our 90th. We were winning by several runs; in fact, my brother was on his way to pitching a no-hitter that day. I came up to bat and quickly secured two strikes. Maybe, I thought, I will be lucky and the next pitch will hit me in the head and I could pretend I was unconscious. But I wasn’t lucky, the next pitch came straight down the middle of the plate and I decide to swing as hard as I could.

I felt something I hadn’t felt all season. Contact! At first I just stared at the ball rolling in the infield (now did you really think I was going to have a home run, did you?), then I heard my coach yell “Run!” So I did, and I beat out the throw by the pitcher to first base. I got my first hit. I think I cried then too.

Despite my brother throwing that no hitter, our coach gave me the game ball. My brother found it earlier this week while going through my dad’s stuff. The game ball is a reminder of what is possible through failure. How discipline, commitment and shear fear of getting hit by the pitch, rejected on prospecting call, or losing out to your competitor in a sales pitch or simply not achieving your earning’s goals should be the catalyst to personal growth.

As the little league season progressed, I still struck out more than not, but I also started getting more hits as well.

Today I ask that you swing as hard as you can. If you strike out – GREAT! – At least you tried. If you get some hits, fantastic. If your colleague gets a big listing this week, like my brother throwing that no hitter, congratulate them and then go out and have your own success. Then give yourself you own game ball.

Frozen Fruit Co. How Two Attorneys from London Launched a New Food Category.Industrial: Let’s Give ‘Em Something to Talk About