Meet the Man Who Became a Dog and CRE Whisperer

Yes Walter Helm has achieved both in his career, he is a highly regarded CRE Broker while at the same time he gives back passionately to several worthy causes one of which is Canine Companions for Independence (CCI). He truly is a dog whisperer as well as a CRE whisperer in our opinion.

In February we had the opportunity to actually meet the dog and CRE whisperer at the 2015 SVN convention in Florida. It was one of the highlights of the conference for our team. We were so excited to meet such a caring and dedicated human being. Walter eats, drinks, and sleeps literally with dogs as he conducts business everyday. Walter traveled from Sacramento, CA to Orlando, FL with Babe as part of Babe’s training to one day become an assistance dog for a child or adult with physical, cognitive and developmental disabilities. Walter provides all the financial support to feed and care for 8 puppies. There is no charge for the recipient of a CCI assistance dog. All of the costs associated with the training and care is borne by the volunteer (Walter Helm in this case) as part of the organization’s goals.

Walter Helm, is a successful commercial real estate professional with Sperry Van Ness Walter Helm AND he is also a member of the Point West Rotary Club and past board member of Air Lifeline, a non-profit organization that provides non-emergency transportation through volunteer pilots and planes. Walter is super busy in business and in his desire to give back to society. We think it’s so amazing how Walter combines his career in commercial real estate and his passion for animals and his drive to help others and give back and make it all work together. 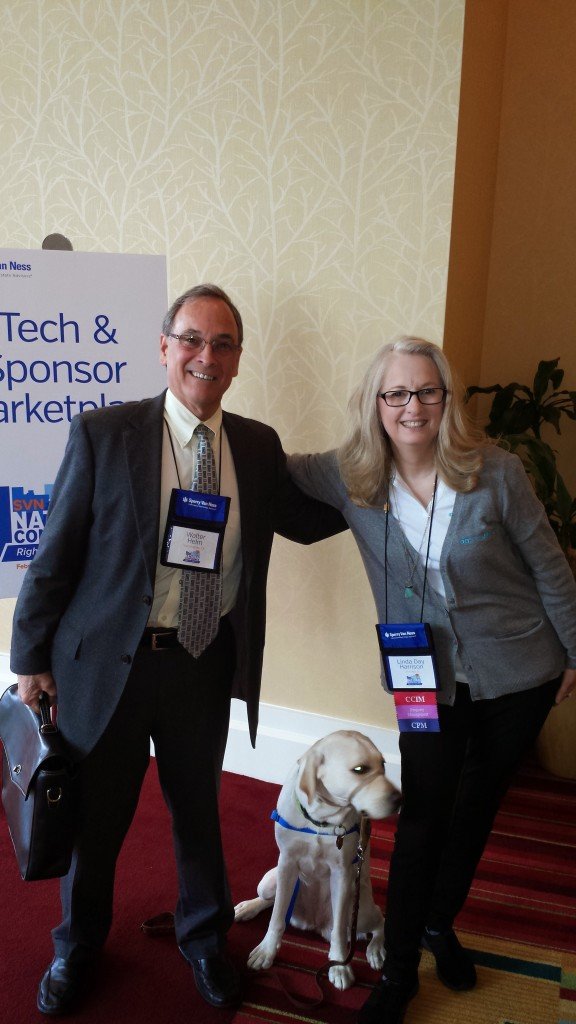 So when we met Walter he actually brought Babe the dog to the conference so she could become familiar with people and activity and travel. Walter takes these dogs everywhere he goes, which is the entire point of training these dogs to become assistance to those in need. The dogs must learn how to do so much and by making the dogs part of Walter’s day is how they learn.

Thank you so much Walter for sharing this with us and all that you do!

This is a short video of Walter trying to do a photo shoot of the 8 puppies that he raised for Canine Companions for Independence with the help of his Service Dog breeder 2 year old Alice. From conception to whelping is 63 days, then 8 weeks of very active raising and the start of training as Service Dogs. They are then sent of to their individual Puppy Raisers that train them for 18 months, then off to graduate school at Canine Companions for Independence headquarters in Santa Rosa for 6 to 9 months. The dogs that graduate are placed with individuals or hospitals free of charge.