There are 4,997 distribution warehouses in Los Angeles county of at least 10,000 square feet totaling $21.5 billion in assessed value (land included). The total square footage comes to 302 million, and the average year built is 1978. This covers a lot of time and space, so let’s take a more granular look at both.

The peak decade for warehouse construction in the Los Angeles area was the 1980s when 1,158 properties were built with an average size of 52,297 square feet for delivery of a total of 60.6 msf. spread across the county. 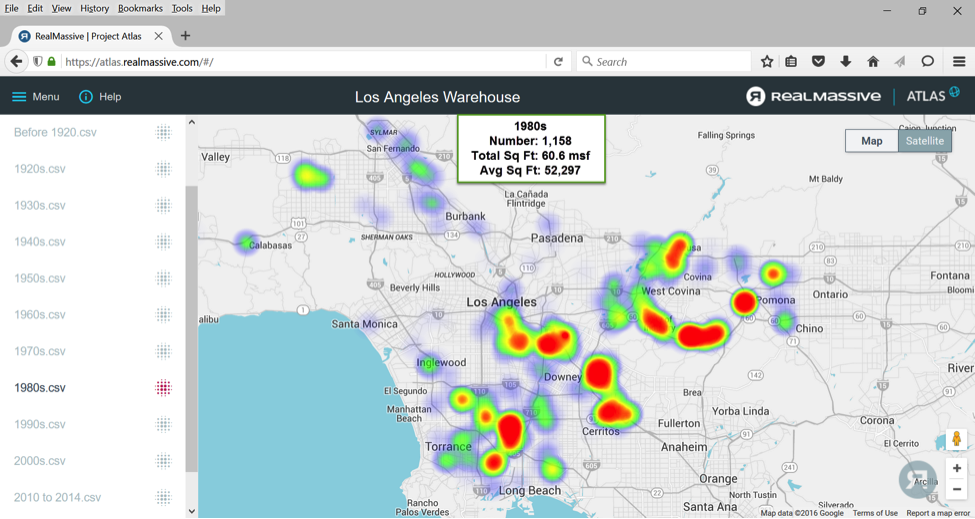 The only other decade that comes close to this level of activity was the 1970s at 1,004 properties and 58.8 msf. The next couple of decades averaged only 655 properties per year, but with much larger average building sizes still managed to deliver 48.6 msf. per decade. Warehouse sizes have continued to grow with 2010 decade-to-date coming in at an average footprint of 130,745 sq. ft.

Click Here to view a heat-map of each decade which includes number of properties, total square footage delivered, and average square footage per property. 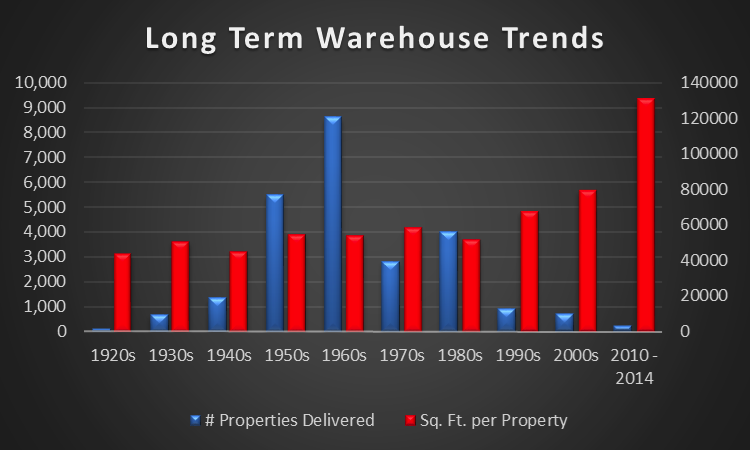 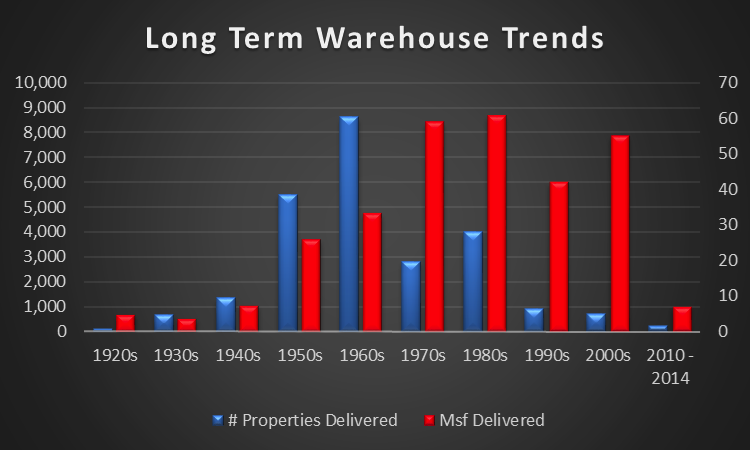 The image below shows square footage concentration by zip code. 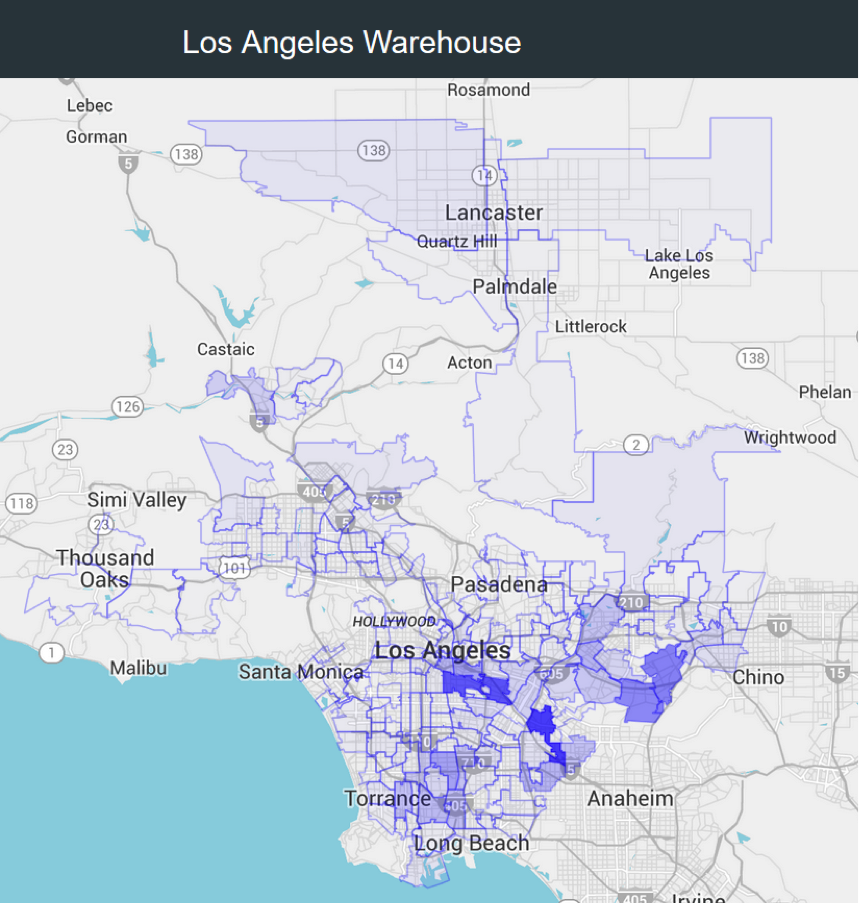 The darker the zip code, the higher the total square footage. We will focus here on the three zip codes with the most units. First is 90670 which includes Santa Fe Springs and runs near I-5 mostly south of the 605, followed by 90040 which runs along I-5 in the Commerce area, then 90058 which is connected to 90040 and runs from Commerce to Vernon, north of Huntington Park. 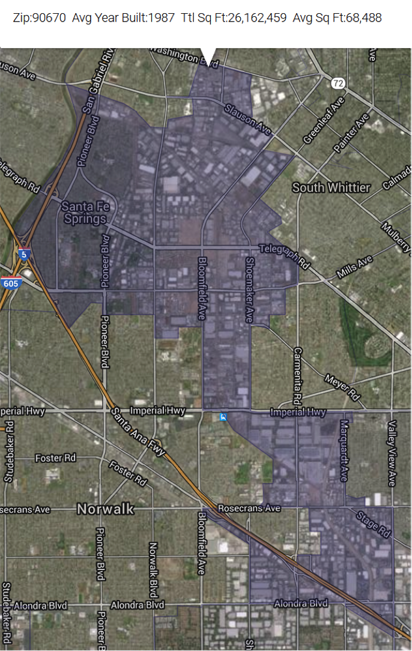 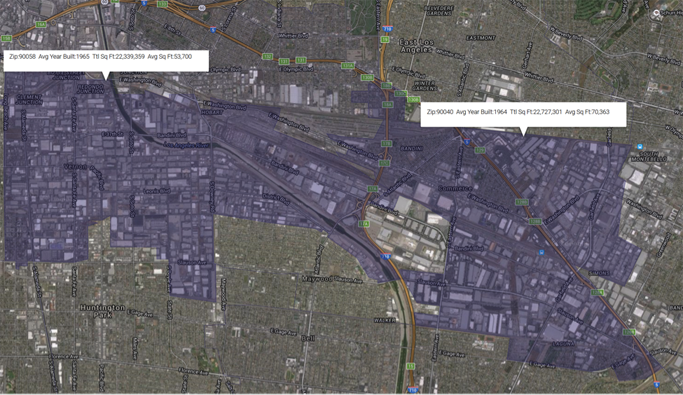 Click Here if you would like to request free access to the interactive version of the map which will allow you to view this information for all 173 zip codes covered.

As shown below, these zip codes are located fairly close to each other and represent 71.2 msf which is nearly 24% of all of the warehouse stock (as defined previously) in the entire county. 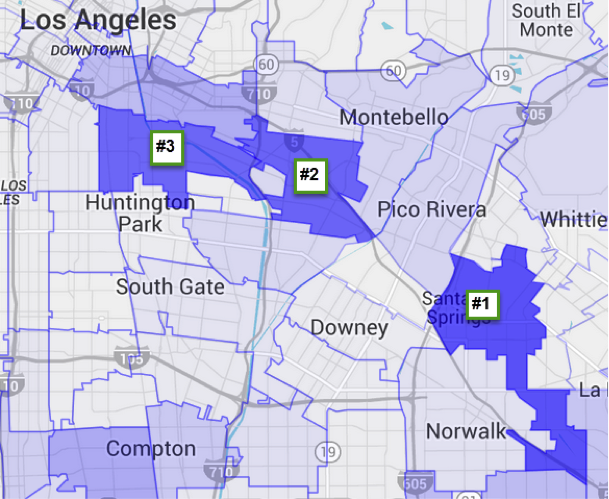 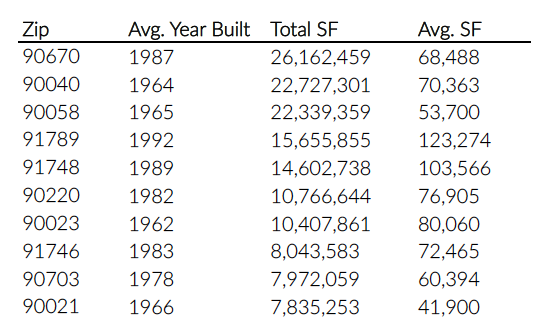 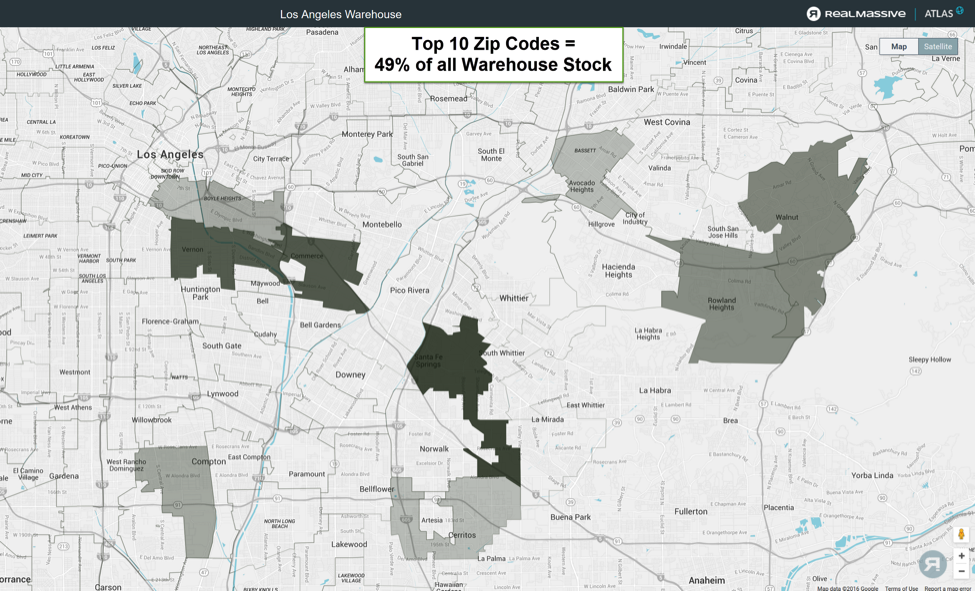 We can overlay warehouse by decade into zip code 90670 (highest square footage) as seen below to get an even better idea of the distribution. Click Here if you would like to request free access to the interactive version of the map which will allow you to look into each zip code in more detail. Notation displays year built, square footage, and most recent appraised value as shown below. 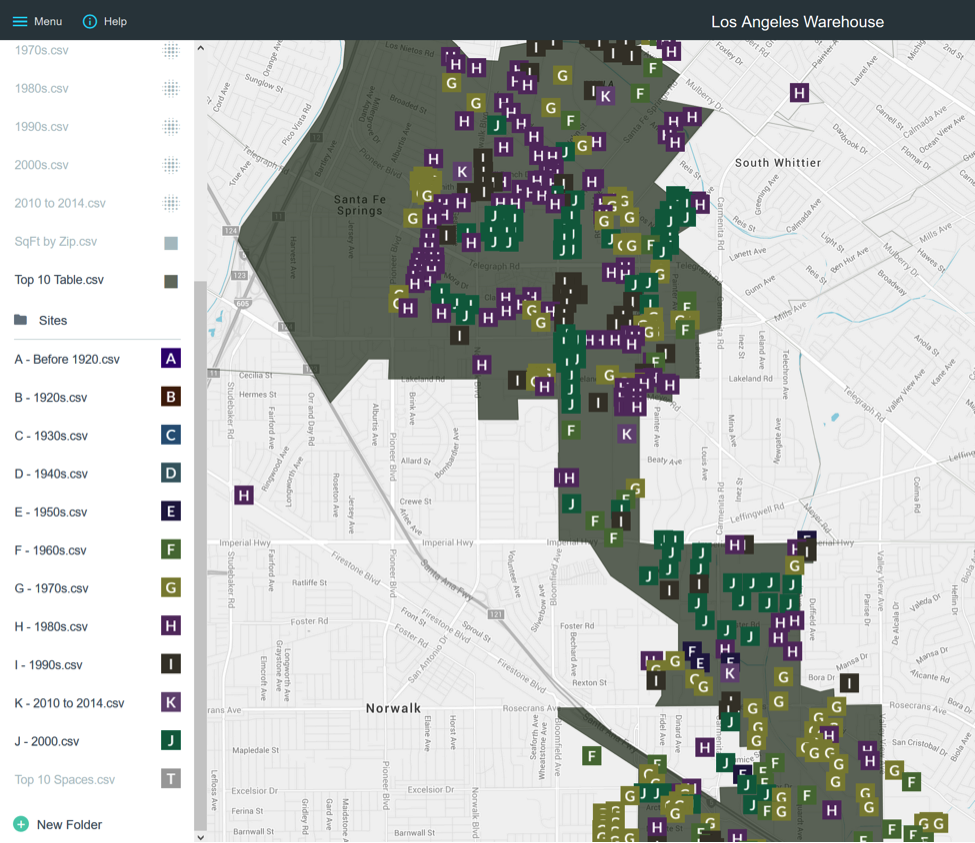 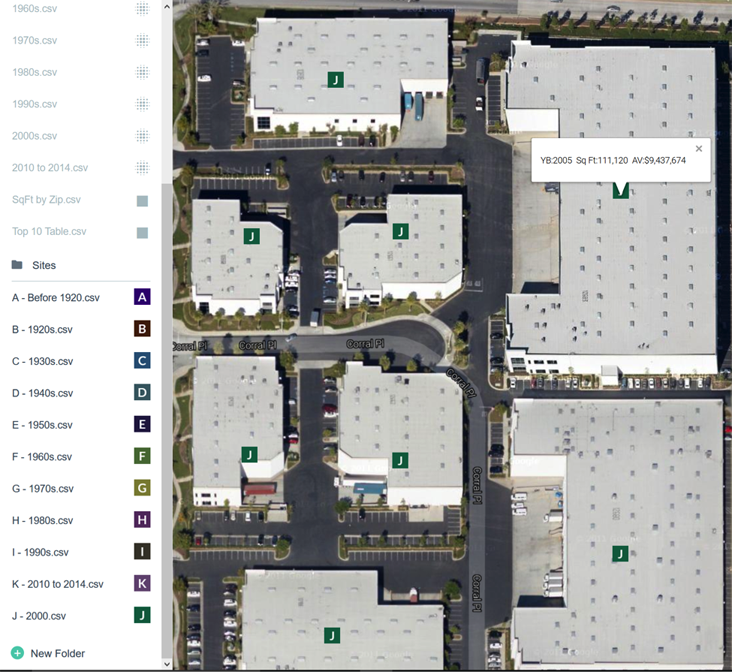 This is the distribution of the ten largest spaces (one of the ten is off the map to the north in the Lancaster area). 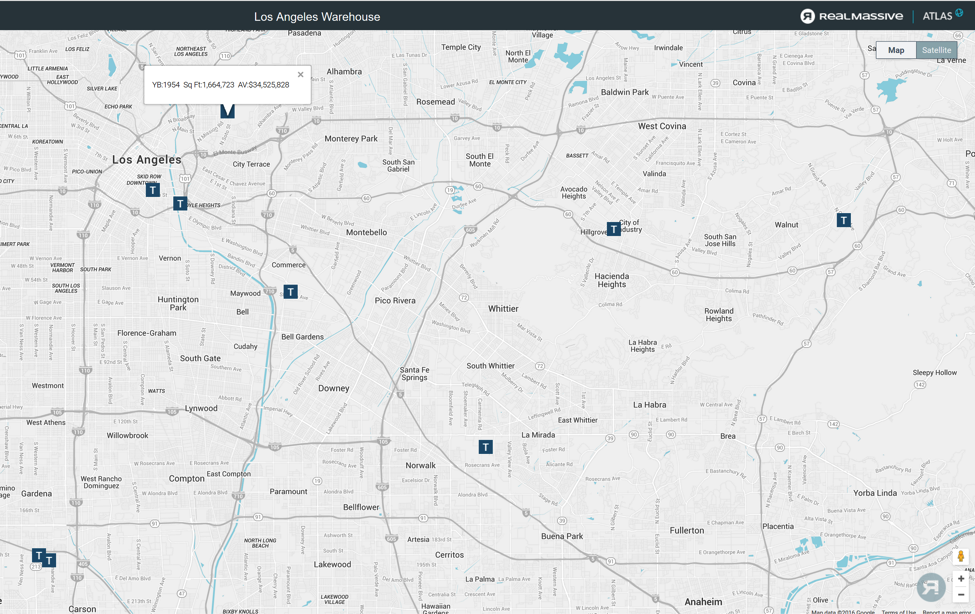 Below is an animation showing the changes in geographic concentration of apartment construction from 1920 to 2014. Click here to see a high-resolution version that moves more slowly. Captions include number of properties built, total square footage added that decade, and average square footage per building.

This data was compiled using data available through the Los Angeles County Office of the Assessor. Maps provided courtesy of Project Atlas. Project Atlas comes pre-loaded with historical construction activity and current appraised values for commercial property types in your markets. Click Here for more information on how you can use Project Atlas, or send an email to [email protected].