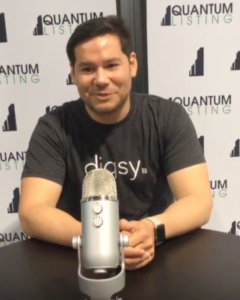 Andrew Bermudez flew in from California to talk at #LetsGetSmart about how data insights can drive sales productivity. Andrew is the CEO and Co-Founder of Digsy AI, a commercial real estate tech startup. Andrew began his career as an agent with Lee & Associates in California, and Digsy evolved from tech tools he had developed to enhance his own practice. Andrew took it a step further with Digsy AI, using data gleaned from thousands of deals to extrapolate best practices for driving sales productivity, and it’s applicable to virtually any industry.

Andrew began his talk describing Digsy AI. The company examines data to influence companies’ behavior. Digsy integrates directly with technology that its users already employ. With the data from these other sources, Digsy gives users information they need to be more productive. As Digsy collects data passively in the background, it eliminates approximately 95 percent of data entry, according to Andrew.

Digsy addresses a problem that plagues the commercial real estate industry, and all other industries that do sales: most people hate their customer relationship management (CRM) software. Because of this, many CRM deployments fail because of lack of adoption. In contrast, Digsy does away with all the tedious data entry that deters adoption.

With all the data Digsy collects, Digsy has learned some surprising insights about the commercial real estate industry.

Andrew spent much of the talk revealing these insights to the audience.

Another hack Andrew told the audience about was to get a phone call with a potential client, rather than leaving a voicemail or email. Even though it may take a few calls to get the person on the line, it is worth it because people respond better to the sociality of a phone call compared to the impersonality of voicemail and email.

When a voicemail is necessary, Andrew recommended that the optimal length for getting a reply is 18 seconds.

From here, the conversation shifted to millennial employees’ distaste for phone calls. Andrew said that millennials prefer more modern, impersonal forms of communication like texting and email. Many members of the audience strongly agreed and voiced their grievances at their millennial employees. This is problematic because data indicates that phone calls are better for getting a response.

Luckily, millennials are also very responsive to data, Andrew reassured the audience. So, when they see that phone calls get higher response rates than email and text, they adjust their behavior accordingly.

Conversation moved to how brokers can get clients when the prospective client already has a relationship with a broker. For this, Andrew recommended that the best way to get a client who already has a broker is to build trust over time. Trust can be built through occasional discovery calls and friendly interaction. With a relationship in place, the broker may have opportunities to do deals for the client.

Using one’s pre-existing personal network is a good way to get in touch with desired clients, Andrew explained. A customer is four times more likely to buy a product if it is personally referred to them by someone they know.

Andrew went on to explain why Digsy has been so successful compared to some other CRM platforms. Digsy has four times the adoption rate of traditional sales systems. This is because Digsy “removes friction and adds value.” Digsy removes friction because people do not have to change their behavior when using the program, as it passively collects information in the background, and it of course adds value with all the information that it provides users.

“People don’t have to be data scientists,” Andrew said, “the [Digsy] system does it for us.”

The talk then turned to the question and answer portion. Once again, the audience was curious about millennials. Andrew noted that he is chronologically part of the millennial cohort, but he does not consider himself a millennial in terms of behavior.

One audience member was frustrated with how her millennial employees tend to leave their company sooner than she would like.

Andrew responded that millennial employees want to believe in the company they work for, its mission, and its impact. Millennials are less about making money as being part of a culture that they agree with, according to Andrew. These young employees will not move companies if they love their job.

Andrew gave an example from his own experience at Digsy. Some of his millennial employees took lower salaries to join Digsy when it was in its startup phase because they supported its mission. These employees wanted to personally grow with a growing business, not just do a task robotically.

If a company wants to retain its employees, it needs to really care about its people. Plus, this strategy makes economic sense because it is easier to hire from within the company rather than bringing in outside talent.

Ben Perlmutter is a freelance writer and English teacher in Seoul, South Korea. He can be contacted for inquiries at [email protected]