Lack of Diversity in CREtech. My Failure. My Pledge.

Let’s be frank: commercial real estate tech lacks diversity. If you’ve attended a CREtech conference, you have surely noticed a glaring truth: We always lack women and minorities on stage. I’m responsible for content at the largest event platform in the CRE technology industry—as someone clearly with the power to promote diversity in tech, I have failed. Miserably.

I, however, want to share my narrative. Not my excuses. Rather the view from my vantage point, as well as an entreaty on how we can and will do better as an industry.

First of all, a bit of a defensive posture: Of the twelve professionals at CREtech and my other brands, The News Funnel and The Content Funnel, we employ ten women and two men. Previous to this journey, while building Beckerman Public Relations, women filled 90% of the positions at the company. Trust me, I know how incredibly they perform in the workplace. In truth, I would rather hire women than men. Sorry fellas. Just sayin.

When I select speakers for our events, I too often forget to put on my diversity hat. I’ll admit that I’m human, and I often overlook the necessary work needed to ensure that women and minorities are equally represented throughout the speaker selection process.

Part of that issue, however, lies within the selection pool. To be perfectly honest, it’s far too small to begin with! When the speaker selection process begins every year, a sea of white, male faces dominate the pool of candidates. Sadly, this is the major truth in tech on the whole. Across the board, the tech ecosystem employs way too few women and minorities. We can’t BS our way out of that fact.

The Facts: Diversity is Not Improving Fast Enough

My anecdotal experience bears out in the research, too. A Diversity in High Tech report from the U.S. Equal Employment Opportunity Commission found that “whites are represented at a higher rate in the Executives category (83.3 percent)” and at 68 percent in the Professionals categories—these two categories encompass the highest level jobs, as well as computer programming and the like. In stark contrast, within these two categories African Americans hold just 2 to 5.3 percent of the jobs, Hispanics come in at 3.1 to 5.3 percent, and Asian Americans are represented at levels between 10.6 to 19.5 percent. And the prognosis for women at the top levels of tech? Women fill a mere 20 percent of the high tech jobs in the Executives category of the research study.

Even as companies make a concerted effort to change the narrative of women and minorities in tech, it’s a slow change. Google’s annual diversity report indicated that over the last four years, the percentage of women in Google’s leadership positions increased from 20.8% to 25.5%, where it currently stands at the end of 2018.

Despite growth, those stats are still far from on parity. But they show remarkably more annual growth than efforts toward minority diversity in tech. Google’s report also found that in 2017 in the U.S., “leadership hires were 5.4% Black, and Black representation in leadership increased from 1.5% in 2017 to 2% in 2018. Latinx representation in Google’s leadership is 1.8% (up from 1.7%).”

Let’s put that into more perspective with a 2014 chart from Gigaom of diversity at the leading tech companies. 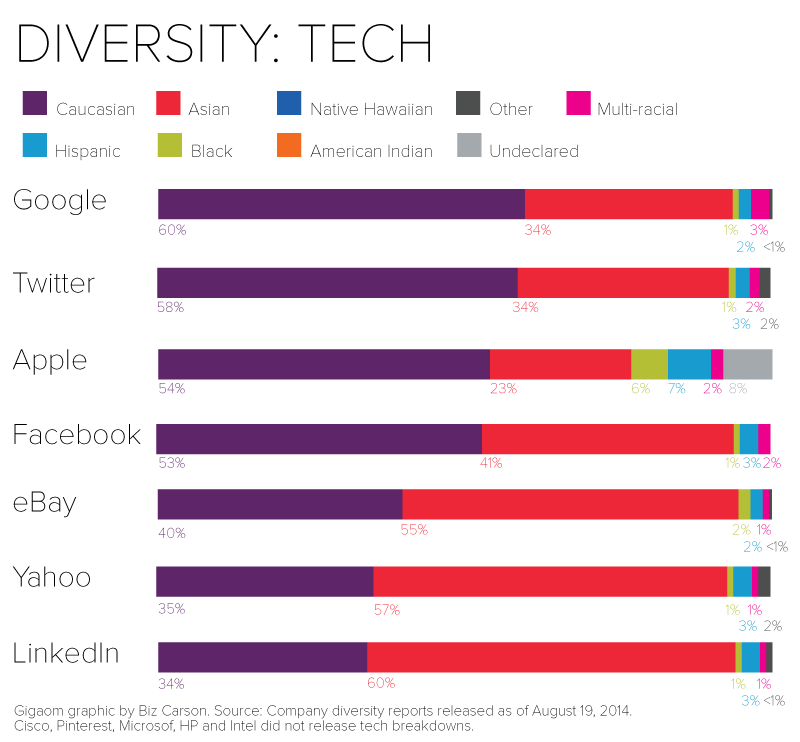 Atlassian also surveyed the industry in 2017 and 2018 and came to similarly depressing conclusions: “Despite massive amounts of attention and discussion about diversity and inclusion, most of the tech industry is not making significant progress toward building balanced teams.”

Atlassian: Individual Participation in Diversity and Inclusion Programs in the U.S. 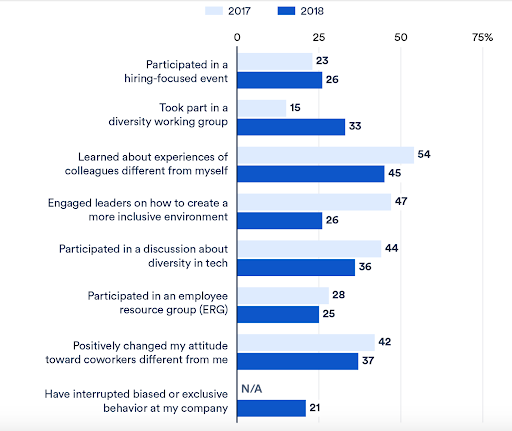 Diversity is an issue in need of a solution. It’s too glaring, too obvious to continue overlooking the work we must do at CREtech to lead by example. We have to do the hard work to improve—the type of work that will benefit our industry in the long term with more nuanced insights pulled from a diverse set  of backgrounds and perspectives.

Where do we start?

But I need help.

For our upcoming CREtech events, I need your recommendations for speakers who reflect our mission to promote diversity in our sector. Email me directly as well, at [email protected] if you want to be considered or have a recommendation. And please spread the word throughout the industry to others—let’s make this the year a sea of overwhelming diversity floods our speaker submissions.

Solving diversity in tech will require two key things. First, those of us in a position to make a difference must fess up to our shortcomings. Secondly, the entire community must recognize we have a problem and become an active part of the solution.

I pledge my support and commitment to expanding diversity in tech. Will you join me? Start by recommending a speaker here.