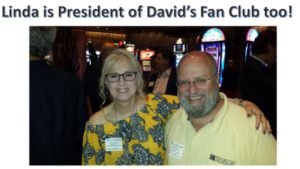 Wow, what an exciting week it has been! I arrived in Las Vegas Saturday afternoon. After checking into Aria, I went over to the Las Vegas Convention Center to help set up our booth. QuantumListing shared the booth with my brokerage company, Perlmutter Properties and Benbrooke Realty Investment Co. and Gladstone Development Corp. We went with a different graphic concept this year. Instead of our usual wall mounted graphics, which required outside labor, we decided to user banner stands. All of the booth members helped in the set up, and we were all pleased with the results. We were done in record time.

Sunday was much more relaxing than in past years since we were able to complete the set up on Saturday. The much anticipated Lets Get Social Meet Up planned with Linda Day Harrison of The Broker List, Office Depot’s Julie Augustyn, and Real Massive’s Mike Westgate at the Aria Sports Bar exceeded all of our expectations. Dozens of members of The Broker List showed up and got the opportunity to put faces to names we encounter in its Blog pages and social media feeds. As the DNA of CRE Survey made clear, the most important source of leads is contacts, and we were all able to expand our networks with some time together away from the hubbub of the convention center and the nightly parties.

After the Meet Up, many peeled off to attend parties. A group of us shared a delicious meal together and got to further solidify these newly formed relationships amidst an abundant spread of antipasto, salad and pizza. Joining us were Linda and John Harrison, Mike Westgate, CRE Radio and TV’s ebullient host, Howard Kline, Alan Zuckerman and Stephanie Waters from Perlmutter Properties, New Jersey broker Rick Riccardi, and QuantumListing’s intern, Jack Grossman. Even though conversation at one end of the table strayed into the tinderbox of the 2016 Presidential election, peace, harmony and conviviality prevailed. Apologies if I’ve left anyone out!

Monday morning RECon16 got into full swing. Convention momentum picked up as the morning progressed. Our booth was in the South Hall, and although not on one of the main “streets”, we still had a steady flow of visitors to meet and greet between our meetings. RECon is always busy for me, and with both QuantumListing and Perlmutter Properties to promote, this year was particularly so. Although I was concerned before the convention about being able to strike a balance, thanks to the help of the Alan Zuckerman, David Liebowitz and Stephanie Waters on the Perlmutter Properties team and Jack Grossman on the QuantumListing team, I never felt stressed. Monday ended with dinner with the Perlmutter Properties team at Blossom at Aria. Try the Peking Duck!

Tuesday we added a whole new level of interesting to the convention. The aforementioned Howard Kline set up shop in our booth to conduct a series of interviews (including yours truly). Make sure you bookmark CRERadio.com to catch all of the interviews as they released over the next several months, as well as all of Howard’s other insightful content. The unintended consequence and added bonus to hosting Howard for his interviews, is that I got a chance to meet most of the interviewees, which really enriched Tuesday. We finished the day at the New York Developer’s party, which is always a great event to catch up with old friends and meet a few new ones. We followed that up with a party at XS at the Wynn thrown by Blumenfeld Development, Serota, Fried Frank and a couple of other companies. I met a few new people and had an opportunity to further bond with our booth-mates.

Wednesday at RECon is always an interesting day for me. Even though attendance is abysmal, it is a great opportunity to have longer, more relaxed conversations. Because of the exodus from Las Vegas, you don’t get to schedule many meetings, but those you do are ones you often remember longest. Although I am didn’t do this on purpose, some of the meetings overlapped. Chuck Dietz of Dietz Architects and Mike McClure of AdArt Signs ended up meeting with me at the same time and we had a really interesting conversation about retail, sign and design trends. After the meeting, Brian Donovan from Donovan Real Estate Services, and Barry Fine, Paul Bulmer and Chris Farrell of Vanguard-Fine came over to our booth to continue a tradition  that Brian and I cooked up a few years ago, and is largely due to Brian’s generosity. We share a bottle of wine with whomever else is around, relax, kibbitz, and due a convention post mortem. The last couple of years, David Liebowitz has gone to In N Out Burger and provided our Wednesday lunch. The Siobhan and Jimena from the neighboring booth, LA’s Decron Properties joined us, and we were glad to provide them with lunch after their generous sharing of lunch on Tuesday.

As a result of this really interesting afternoon, we have cooked up an idea that we’d like to implement next year for the stragglers that are still at RECon on Wednesday. We’d like to try to have an “event” at our booth where we have some panel discussions starting at 11:00, then around noon, open a few bottles of good wine and break into some In N Out Burgers for a slightly larger crowd, so we can end the show with a really great experience instead of the fizzle that so many have. Linda, Howard, what do you think?

Time to sign off and catch up on some sleep. I’ll add further reflections in the comments, and invite you to do the same.

What’s that? You’re not a member of QuantumListing yet? Click HERE to sign up and we’ll give you a year’s trial Premium Membership!