Growth and Opportunity in the Desert

A drastically changing city, with a booming population and thriving economy, there’s no doubt Phoenix is a unique desert oasis.

Between July 2015 and July 2016, Phoenix was the fastest growing city in America. It recently passed Philadelphia to become the fifth largest city in the country. By 2025, it is expected to grow by a whopping 23.2%, to roughly 5.5 million people. And Phoenix is also seeing tremendous numbers in various other social and economic areas. 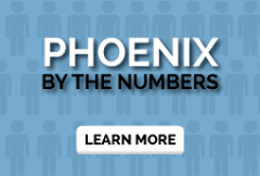 It’s also a city that is increasingly more diverse, as well as young. The average age of Phoenix residents is just 33 years old and nearly 21 percent of the population is part of the Millennial generation. As for the the city’s minority population, it will likely become the majority within the next generation.

“Phoenix has the secret sauce, and one of the things in that secret sauce is our diverse population,” said Phoenix Mayor Greg Stanton in a recent Yahoo News article.

Phoenix’s has a reputation as a melting pot of people from all over the United States and the world. Considering its growth in recent years, it’s providing opportunities for people of all walks of life to start fresh, thrive, and achieve their dreams.

In fact, the state of Arizona was recognized by two business magazines as earning top marks in economic development – development that has come in a growing number of sectors. Phoenix is no longer driven primarily by real estate and construction. The city is now seen as a major player in the technology sector, with many calling Phoenix the next Silicon Valley, or even coining the phrase “Silicon Desert”.

But it’s not just tech that is emerging as a thriving economic sector. The healthcare industry is a major contributor to employment growth. Additionally, advanced manufacturing, aerospace, automotive, transportation and logistics, financial services, and renewable energy are all critical to Phoenix’s growing economy.

A Great Place to Start

Despite being one of the largest cities in the country, it is still quite young in comparison to its counterparts. There is no historical, old guard that manages the reigns of society or business. Individuals are creating opportunities to bootstrap themselves and find success. The social and business ladder is much less daunting than in many other parts of the country.

There also seems to be a smaller, more tight-knit network of people. And many of those networks are willing to partake in fresh, collaborative thinking. Co-working spaces such as CO+HOOTS, Mod, Seed Spot, The Department, and many more have popped up across the Valley offering entrepreneurs the chance to get their projects off the ground.

To create an even more conducive environment, the state of Arizona passed legislation in 2015 making it easier for entrepreneurs to get financing needed to open or expand.

A Great Place to Grow

The unique economic environment of Phoenix is not only catching the eyes of soon to be business owners, but also out-of-state, well-established companies looking to expand. The factors that are driving economic activity and growth are also luring more and more companies to invest in the Valley of the Sun.

Tech firms such as Uber, Yelp, Shutterfly, DoubleDutch, and Gainsight have all chosen to expand into Greater Phoenix. Moves that led Chicago public relations company O’Connell Communications to announce they would be moving to Phoenix, as a way to be closer to the growing tech scene.

But it’s not just tech companies that are seeing the value in Greater Phoenix and its surrounding areas. Electric car manufacturer Lucid Motors plans to build a $700 million factory in Phoenix suburb Casa Grande. State Farm chose Tempe as one of three regional office hubs in the United States, bringing roughly 8,000 employees to the area. Intel Corp, who had existing plants in Chandler, recently announced they would invest more than $7 billion in the Chandler facility to create the most advanced semiconductor factory in the world.

And mattress retailer Tuft & Needle, whose concept was formulated in Silicon Valley but decided to base in Phoenix, went as far as to write a lengthy essay on why companies need to move to Phoenix.

With growth comes opportunity. With opportunity comes growth. Many of these things create a cyclical effect which is driving the continued economic activity within Phoenix and the surrounding communities.