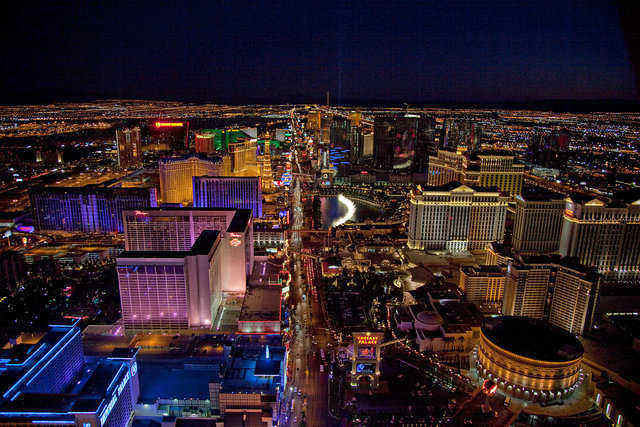 I just got back from a hot but fun weekend in Las Vegas and of course my commercial real estate brain could not turn off the whole time I was there.

The immense size of the development and the energy it must take to run it all caused me to do a little research when taking a break from the distractions of the Strip.

According to Las Vegas tourism sources, over 41 million people make the pilgrimage to Sin City every year.

There is an estimated 22,000 conferences held there.

With attractions at every corner, it’s not surprising to hear there are more than 150 casinos and approximately 150,000 hotel/motel rooms in the area.

The gaming and gambling industry only makes up about 43 per cent of the casinos’ revenue these days; the balance is credited to food, beverage, and room rental.

All of this activity places McCarran International Airport as the seventh busiest airport in the US and North America.

Fun fact: did you know that the Strip isn’t actually located in the municipality of Las Vegas but lies in the greater outlying Clark County? It’s located south of Las Vegas City limits.

I’m a huge fan of the commercialized history of Las Vegas through films like Casino starring Robert De Niro and Sharon Stone (check it out!).

But with success came regulation and the wise guys are now the corporate guys.

Ownership of the casinos has further changed dramatically with large corporations owning multiple properties on the Strip.

With such large ownership comes the opportunity to spin real estate in the most lucrative ways, including real estate investment trusts.

MGM Resorts International is a single tenancy of such a REIT, called MGM Growth Properties LLC. They pay a single net lease for their 13 properties in Vegas.

A fun fact is: that with all of the properties on the same head lease, the operators can’t expect to bankrupt even one to save on rental commitments.

The MGM Growth IPO opened in 2016 and the lease revenue was valued at $550 million. Given recent acquisitions, that revenue is up 38 per cent to $757 million annually.

It may seem risky to bank on a REIT with only one tenant but with $10.9 billion in MGM Resorts’ reported annual sales I think they might be okay.

I like to think Canada is a pretty progressive place when it comes to environmental sustainability. Which is why Vegas can be jarring when you consider the consumption but little apparent recycling taking place.

According to local authorities, a casino can produce the same amount of waste which would be equal to that of a moderately sized City in a year.

A typical hotel room can go through 641 king sheets, 979 pillow cases and 750 bath towels per year, requiring 7,513 gallons of water for washing.

Casino recycling has been slow coming with sincere efforts demonstrated only in the last few years. MGM Resorts, one of the biggest players in Vegas, reports they now have a Waste Council to oversee this part of operations.

In 2011 MGM Resorts boasted a recovery of 55.2 per cent of garbage from entertainment and shopping plaza CityCente.

For a final fun fact: they have diverted as much as 7,600 tonnes of uneaten food to feed 2,500 local pigs every day!

These are the Technology Expectations of Gen Z AgentsDetroit’s Next Chapter: From Bankrupt to Building Up