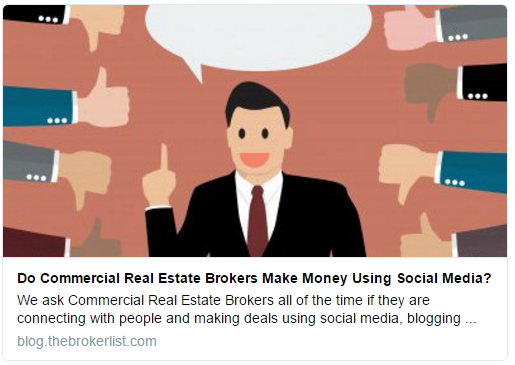 One of the most burning questions in the commercial real estate business today is whether or not brokers really make deals using social media. Do marketing people and all of their online marketing efforts to promote their brokers pay off? We asked our audience to weight in and the facts are the facts. These are real stories from those professionals who have something to say about using online marketing tactics, such as social media or blogging to help keep their pipeline full.

Our Call to Action

To get feedback from our users, we used Twitter, our blog, and Linkedin to drum up some takers! We pushed out a call to action to ask brokers to tell us their stories. We did a Twitter poll as well. The Twitter poll was quite interesting as we had only 28 responses and the result is below:

Have you or your brokers made any #CRE deals as a result of social media or blogging? We want to quote you for an upcoming blog! #CRE

But upon asking the question on Twitter, the most aggressive and successful brokers jumped in and were eager to share their amazing stories with us. As you will see from the overwhelming responses below, brokers are definitely making money using social media and online methods to gain business! Of course, this is just one tool in their arsenal, but it seems to be paying off for them!

If you have a success story you wish to share, please let us know so you can featured in upcoming blogs were we can feature your success story deal and how social media or any form of technology helped you close that deal! 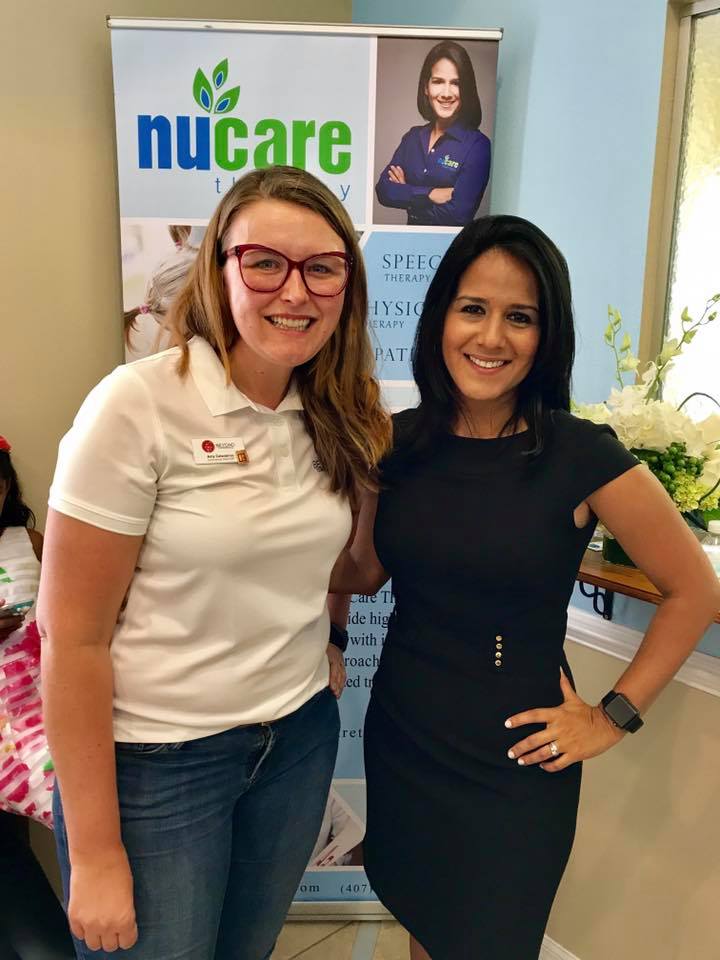 Amy Calandrino obtained a local client using Facebook, combined with blogging to make her office deal, which was a broker to broker deal. Here is Amy’s story!

It was hard to pick one deal because social media is what keeps that “top of mind awareness” nowadays. I hear all the time that one of my posts triggered them to reach out to me.

While I’ve handled deals large and small, helping a business get their first location is incredibly gratifying. I find that small business owners are thankful to have one more thing off of their plate when working with me. So, I just helped Carolina Rincon of Nucare Therapy find her first location. How did she find me?

First of all, my business banker Jennifer Hodges who admits to being a Facebook junkie – http://beyondcommercial.com/november-2015-jennifer-hodges/ – and I are Facebook friends. It’s no secret on my Facebook wall that I am Commercial REALTOR who helps small businesses (in between posting photos of my dog #DukeWhippet, foodie photos and my other activities).

In any event, Jennifer connected me with Paul Roldan of a financial planning firm to help with their lease renewal. We became Facebook friends too, to stay connected. Paul then referred his client Carolina Rincon to me. At the time, she was traveling to provide service to her pediatric therapy clients (including those with special needs) and it was limiting her ability to service more clients. She was ready for a brick and mortar location.

Carolina leaned on Paul to help her with financial planning for this big leap, I helped her find the space, and she also worked with ProsperaUSA on her business plan so I could show prospective landlords that I had a worthy tenant.

We first connected in August 2016 and she inked her lease deal in February 2017. In June 2017, she had her public grand opening.

Amy Calandrino can be found on: 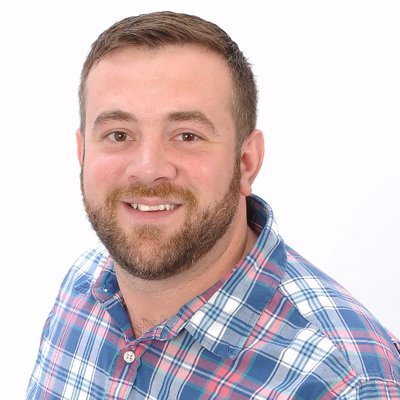 A couple of years ago I listed an older office building for lease. As soon as I had it listed I reached out to somebody that I knew was looking for space with a link to the listing. He replied, thanked me for sending it, and said it didn’t really fit the look he wanted in his next office. A couple weeks later I had a video tour done and posted it on Facebook page, which the above prospect followed. The video showed an office that had some glass walls and showed real well. The prospective tenant that dismissed the property before called me up asking where this office with the glass wall was and said that’s the office he wants. I explained that it was in the same building I had emailed him about before. He said he wanted to see it right away. The next day he looked at it and had a lease signed less than a week later.

A few years ago I was aggressively growing my LinkedIn network while regularly posting about services I offered. One day I posted that, in addition to commercial real estate sales and leasing, I could help people sell their business. I received a reply from a local business owner that had been contemplating selling his business. We had a meeting and several discussions over the next couple of months. Eventually I listed the business and sold it about 3 months later. Since then I have even sold that same client a new business. Two deals out of one LinkedIn post.

Kevin Vandenboss can be found on: 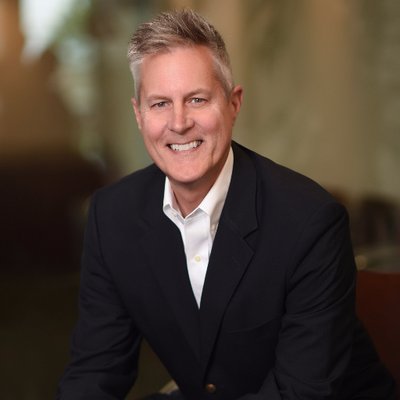 A have a ton of examples, but the 2 most impressive deals completed were a direct result of Tuesday Traffic Tips (TTT). The other came as a result of your blog.

Received a call from a shareholder in Riverside Calif office. He said he loved TTT and my son is thinking of getting into business will you include him in your mailing list. 4 months later I received a call from the same shareholder and he referred me to a deal in my market. He could have referred anyone and chose me. We performed a BPO on the building and I got paid for that and then 1 year later I got a call from a building owner who engaged us to sell the building. We closed a $6.5 million deal. During the same time frame, this same shareholder and I closed a $5 mil dollar deal in his market. The familiarity and connection via TTT is what has allowed us to do both of these deals.

Blog – Got a call one year ago from a residential agent. The residential agent has a family friend selling a manufacturing building in my market and they were going to have $27.5 mil to redeploy into tax deferred exchange properties. She found me through my blogging efforts. We closed 3 deals totaling $27.5 mil dollars last year.

This is $40 mil dollars of deals, you can do the math on these deals. These are the 2 biggest examples and I can give you 10 or 12 more examples as well!!

Allen Buchanan can be found on: 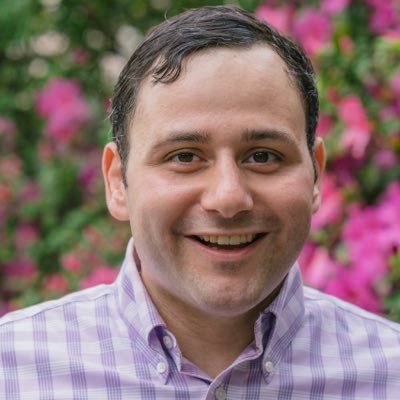 To procure purchasers, real estate agents promote properties through a variety of channels. In addition to utilizing standard listings and normal real estate promotional tools, I occasionally promote listings and projects through my personal social media presence when appropriate. While admittedly, specific types of developers/investors seem to be active online, sharing special and interesting listings will often be shared by your followers expanding your reach and bringing your listings to people who might not have been actively looking for it. If nothing else it’s a productive way to remind your followers what you do, and sometimes it can be a lot more.

I generate phone calls and direct messages from people who know me through @austinlavin and sometimes they have led to deals. Two years ago, an acquaintance tweeted “Hey, #NOLA, any commercial real estate agents out there? We’re exploring possibility of new office space. ” And before I even saw it, a mutual friend suggested that she reach out to me.  This tweet led to me assisting her group lease 4,736 rsf in a Class A office building in the New Orleans CBD.

More recently, I found a buyer for a historic renovation of an old school building through Instagram. I posted an architecturally interesting photo, with a very basic description and a joke hashtag #milliondollarlistingNOLA.  Shortly after I received a message from a friend telling me that he wanted it. While I knew my friend was looking to develop properties, I had not thought to bring it to him so we might not have put the deal together if he hadn’t come across the opportunity online.

Austin Lavin can be found on:

BONUS Content from Bo Barron of The Massimo Group! 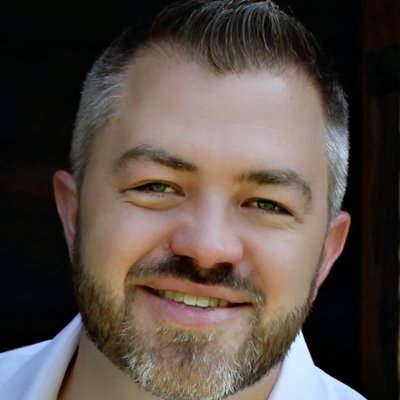 I believe that ‘social media’ is a marketing/presence play.

What I mean by this is creating an online/digital footprint, engaging with others, and demonstrating your expertise allows you to become known – to become top-of-mind. While you will find stories where social media has led to deals, social media isn’t about prospecting.

However, an online presence can have a massive impact on your prospecting, but indirectly. I like to think of your prospecting system as a machine that allows you to systematically target, pursue, and win the business you want to do. Your presence, digital and otherwise, is the grease that allows that machine to crank out bigger and higher-quality opportunities at a high efficiency. It makes everything easier.

When your prospect runs into you online, interacts with you, or maybe just reads something that clearly shows that you know what you are doing and produce outstanding results for your clients, he/she remembers. How much easier is it call someone who knows and is impressed by you versus a true cold call.

Creating an online presence through content marketing and social media is a long term presence play that will make, over time, everything else about your business run more smoothly.

Bo Barron can be found on:

Follow me on Twitter @DayHarrison or connect with me on Linkedin or check me out on tBL Linda Day Harrison.