After dropping each quarter during 2015 and 2016, rates of return for commercial real estate held by the nations large institutional investors has leveled off over the past three quarters. Furthermore, the lower returns have only meant that returns are just back to or at slightly lower returns than a long term average. 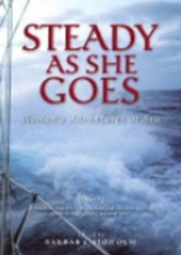 These are unleveraged property performance. About half of the properties in the NCREIF index have some degree of financial leverage. Returns on these properties still have favorable financial leverage due to the low interest environment. For the 3,568 NPI properties utilizing leverage, the aggregate loan-to-value ratio is 41.5 percent and the leveraged return was 2 percent for the quarter and was 9 percent for the trailing year. 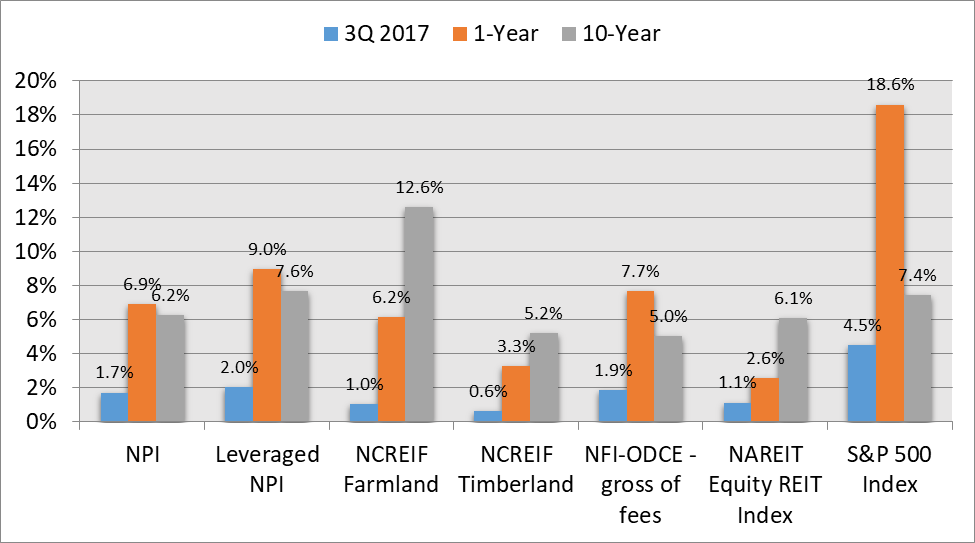 Comparing across asset classes, the private commercial real estate market, measured by the NPI, had higher returns than the public market, measured by the NAREIT Equity REIT Index, for the quarter, year and trailing decade. This is despite the inclusion of leverage in the NAREIT Index versus the unleveraged NPI. NFI-ODCE in the chart represents the returns earned by a subset of funds that invest in so called “core” real estate, which is the lower risk properties at the best locations, have high occupancy and use low amounts of leverage. The returns are typically higher than the NPI because of the leverage used by the funds but lower than the returns for all the leveraged properties in the NPI because this includes riskier properties. The chart also shows the performance of farmland and timberland that is owned by the institutional investors that are members of NCREIF. Farmland has not performed well in recent years, although we see that it has very good performance over the last ten years. Timberland on the other hand has struggled for the past ten years. Finally, it is no surprise that the stock market, represented by the S&P 500, performed extremely well over the past year in part due to the anticipation of less regulations and tax reform.

Returning to the NPI, industrial (think warehouse for Amazon and others) remains the strongest performer by property type with total returns of 3.29 percent in the third quarter and 12.80 percent for the trailing year. Other NPI property types continue to trail industrial by a wide margin. In the third quarter, hotel experienced a reversal in its six-quarter depreciation trend with a slight 0.08 percent appreciation in the third quarter, resulting in the second strongest quarterly total return, at 2.30 percent. Apartment landed in the middle of the pack for the quarter with a 1.66 percent total return, while having the second strongest trailing year total return of 6.22 percent. Over the trailing year, total returns for both office and retail are roughly 6 percent, similar to the apartment sector. But office and retail both experienced a step down in quarterly appreciation this quarter for weaker total returns of 1.40 percent and 1.20 percent, respectively. Retail may continue to struggle due to store closings although the best locations with the right tenant mix are likely to do relatively better. 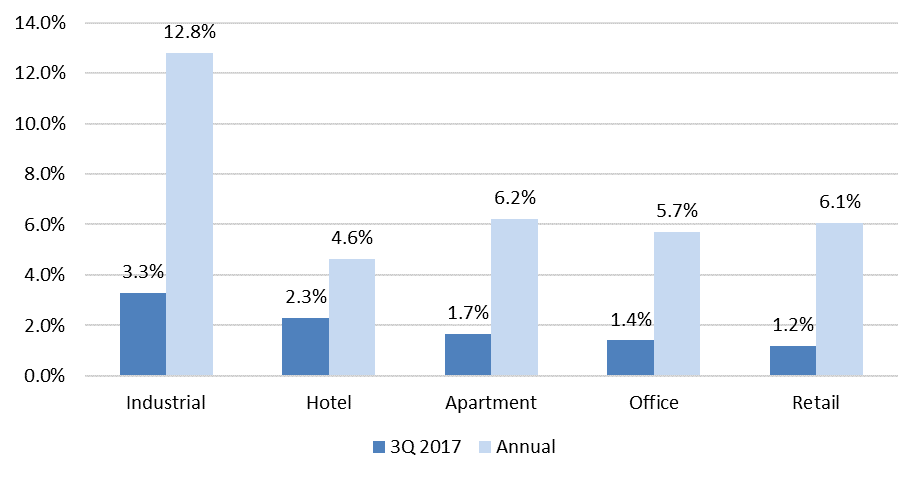 Net operating income (NOI) growth for all property types combined was 5.1 percent for the trailing year, down slightly from 5.4 percent in the prior year while remaining above its 3.2 percent long-term annual pace. Rental income growth also remains above average, at 3.4 percent, but decelerated by 70 bps versus the prior year suggesting that NOI growth is being supported by both rising income and declining expenses. No surprise that Industrial again leads for both measures, followed by office. Apartment NOI and rental income growth have slipped below their respective long-term averages for the trailing year. Retail considerably lagged behind the other property types with 1.4 percent rental income growth for only 0.8 percent annual NOI growth.  Many investors are starting to get bullish about the office market due to the recent strength in rent and NOI growth. 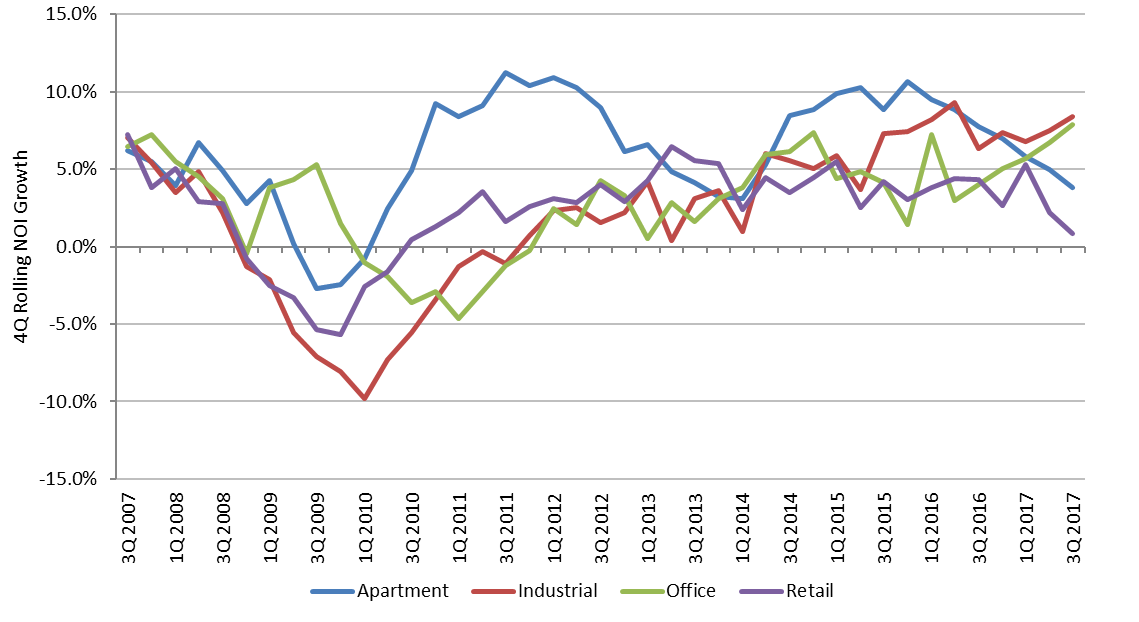 Cap rate compression continued for NCREIF properties in the third quarter 2017, although the change was slight. The implied valuation cap rate was 4.38 percent in the third quarter, down marginally from 4.47 percent last quarter. All property types experienced modest cap rate compression over the quarter and range from 4.16 percent for apartment to 4.79 percent for industrial. 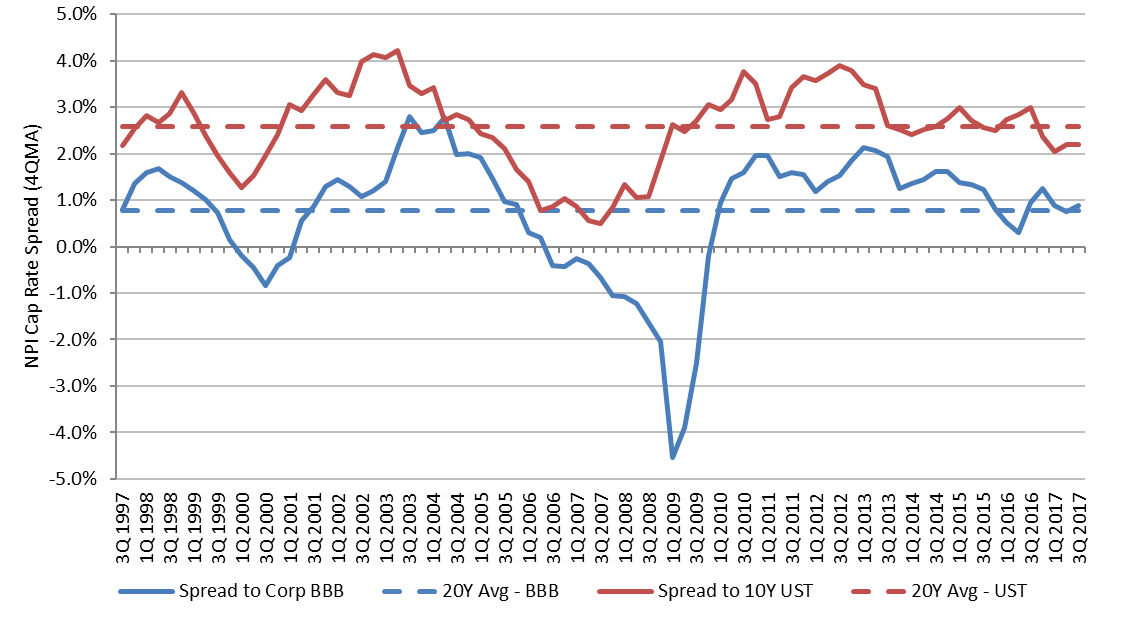 In summary, commercial real estate markets seem to be holding up well and delivering steady if not robust returns to investors.  While there is some weakness in apartment and retail properties, industrial properties (mainly warehouse) continue to perform well and office properties may be poised for good performance over the remainder of the year.  Much may depend on the success of tax reform and the performance of the overall economy.  The NPI returns tend to be highly correlated with GNP growth and job growth.

Crunch Those NumbersCashing out & Profiting in Commercial Real Estate: A Case Study