Has the Commercial Real Estate Market Reached a Peak?

Has the Commercial Real Estate Market Reached a Peak? 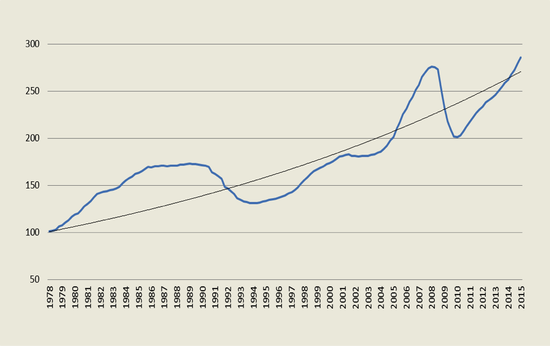 The recovery has resulted from improving rent growth and occupancy as the economy has improved, coupled by a steady decline in capitalization (cap) rates that have been largely due to low interest rates. As a result, returns to investors have been exceptionally high in recent years. Returns for institutional real estate as measured by the NCREIF Property Index (NPI) have been running in the double digit range for the past five years (see Exhibit II).  These are unleveraged returns for existing properties at the better locations that are held in funds managed by large institutional investors who contribute data quarterly on the performance of about a half-trillion dollars of commercial real estate.   The index includes apartments, retail, office, industrial warehouse and hotel properties.[i] 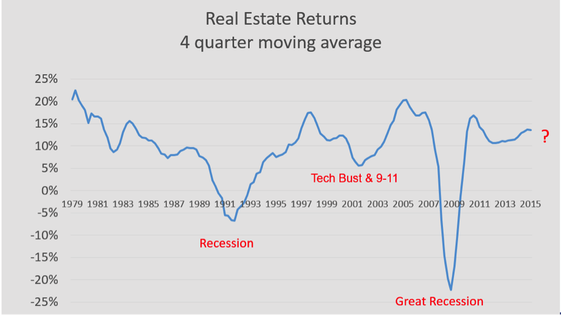 While the price increases and returns for commercial real estate have been quite good, investors are increasingly nervous about how much longer it can last. The quarterly returns for the NPI have been dropping for the last five quarters (see Exhibit III). It could be argued that the returns have returned to a level that reflects more of a long term average for commercial real estate. But we also know that markets tend to be cyclical and move below the long term average after a period in which they have been above the average. 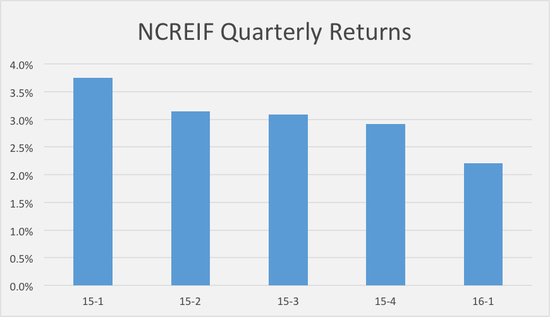 This does not necessarily mean that values will fall. What it means is that they may plateau at their current level meaning that source of returns will be primarily from the NOI generated by the properties. Rent growth has been strong in recent years with occupancy near record highs for most property types. NOI for the properties may continue to increase, but with little or no change in value. This means cap rates may start to rise. Cap rates have been at historic lows due to the low interest environment and the Fed has indicated that it would like to start raising interest rates as long as the economy keeps improving.

That said, the rise in interest rates could be accompanied by a higher level of inflation in the economy. Historically, commercial real estate has thrived in an inflationary environment as inflation pushed up replacement costs and leases included provisions to protect the landlord against the impact of inflation on rental rates and expenses. This could keep cap rates down even if interest rates rise as investors are more willing to pay a higher price for current NOI in the expectation of higher future NOI and price increases due to inflation.

A recent survey of investors by the Pension Real Estate Association (PREA) forecast returns for the NPI to steadily decline until they level off at around 7 1/2% in 2019 (see Exhibit IV) with most of the return coming from income rather than from any price appreciation. If this is the case, most investors would feel that returns had simply returned to a level where we would expect them to be for institutional grade commercial real estate. So we have to hope that there isn’t some unexpected event that would trigger a more significant decline in returns and even a decline in values during the balance of this decade. There is nothing currently on the horizon to suggest that may happen, but it is always unexpected events that upset market equilibrium.   We will try to keep readers informed of events that we believe might have an impact on commercial real estate. 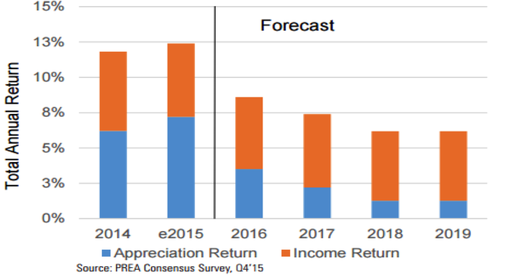 [i] See www.NCREIF.org for more information about NCREIF.

Roundabouts - Are You Ready!San Antonio: The Lone Star State’s Next Boom Market