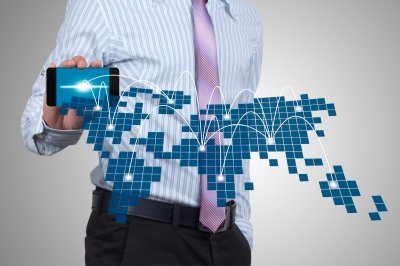 Working at a startup in commercial real estate, we hear a lot of generalizations about the real estate industry both internally from our own staff as well as externally from our clients, users, and peers. If you’re involved in real estate or real estate technology, chances are you’ve at least heard of (if not made) some of these assumptions: technology in real estate lags behind other industries, residential innovation outpaces commercial, commercial brokers are reluctant to change, the CRE world is confusing/insular, and unattractive to outside investment, etc.

With very little data to solve these tough issues, we faced a dilemma: do we let unproven assumptions drive our attitudes and product development process? Or do we take it upon ourselves to study these generalizations? We chose the latter.

Over the next couple of weeks, we’ll document our investigation into real estate technology trends and seek to validate or invalidate the assumptions that many of us make on a daily basis. We’ll show graphs, provide links to our data, and throw in a few thoughts about what’s really driving behavior. Let’s get started:

Innovation in the residential and commercial real estate industries has consistently lagged behind other industries.

To investigate this first generalization, we decided to track the number of technology companies founded each year focused on residential or commercial real estate. To do so, we first pulled data for all real estate companies on AngelList. Then, we painstakingly profiled each company manually to find the year founded.

We hypothesized that, when plotting the number of companies by year founded, we would see a spike near the dot-com bubble of the late-90’s/early-2000’s, and then a steady increase from the mid-2000’s to today. What we found was much different: 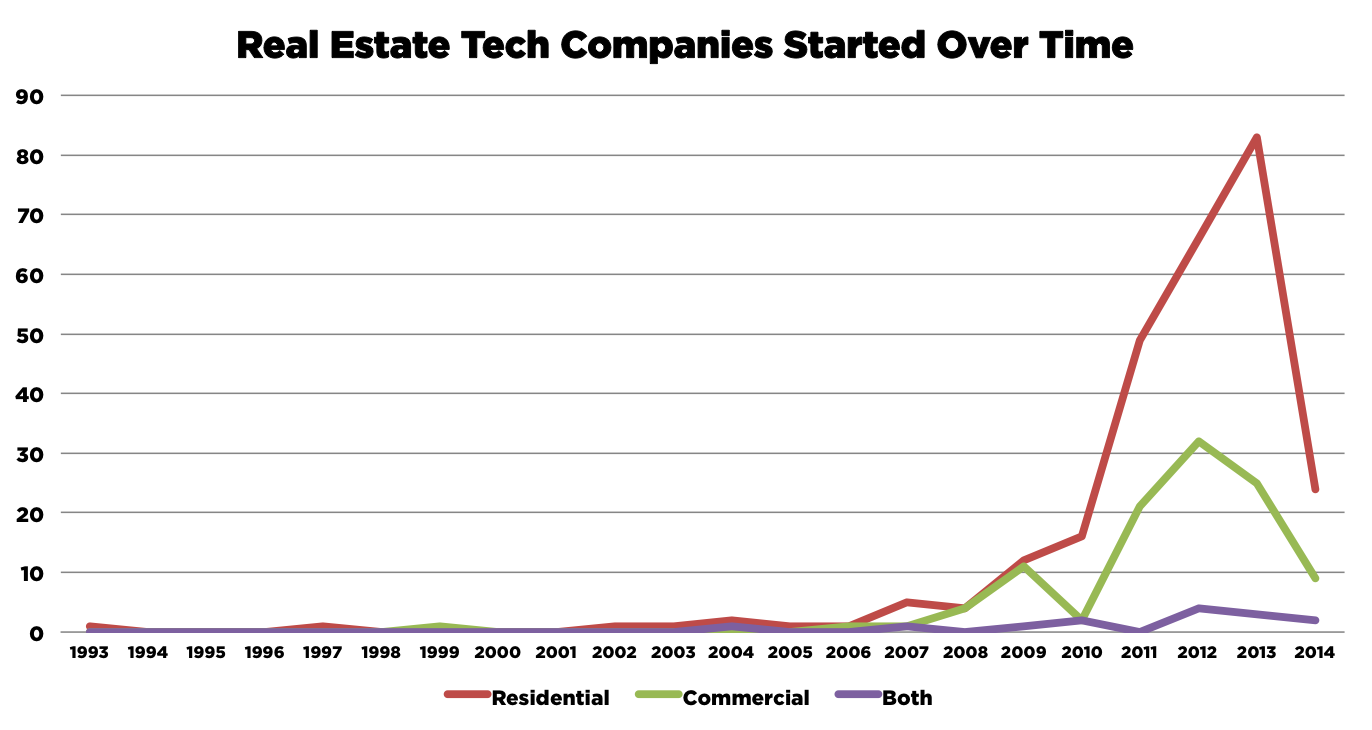 New technology companies seem to be practically nonexistent in the real estate industry until the late 2000’s and didn’t start to increase dramatically until 2010-2011. In residential real estate, the number of technology companies has grown impressively since 2008, increasing from 4 documented new companies in 2008 to 83 in 2012. The commercial side of the story looks much different, with only steady increases in 2011 and 2012 but a lack of a true spike like we see in residential.

Lastly, innovation in commercial real estate seems to have dropped significantly since reaching a peak in 2012 and has continued along a declining trend in 2014 (We hypothesize that this is most likely a combination of the year being just over halfway complete and a probable lag between companies’ founding and their creation of an AngelList profile). We’ll revisit this at the end of the year to get a better idea of how 2014 compares, so stay tuned.

How do these trends compare to other industries?

Putting real estate innovation into the context of other industries is difficult because selecting a comparable industry is inherently unscientific. That said, take a look at the chart below showing total venture capital funding in the U.S. for each of the past 20 years: 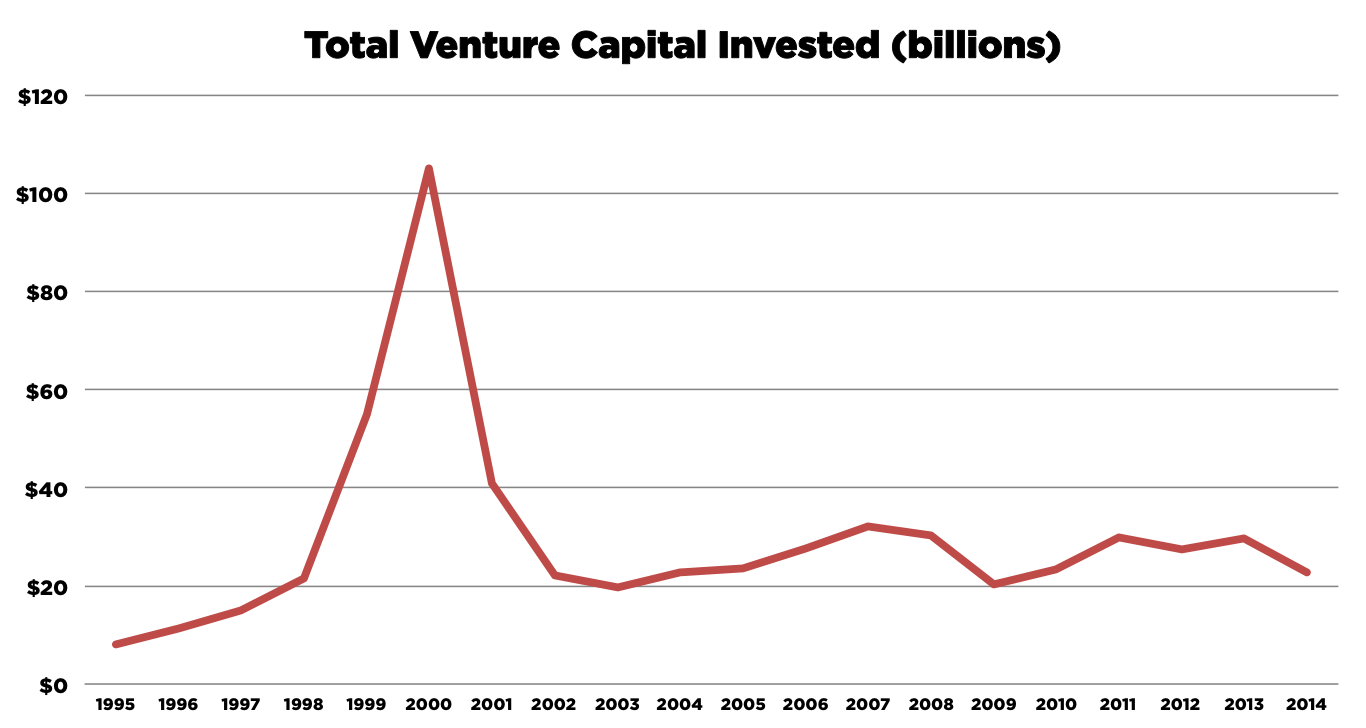 That massive spike in VC funding in 1999-2000 is well-documented, but it’s even more striking when you revisit the previous chart to see the dearth of new RE companies during that period. Considering that RE companies don’t begin to crop up in significant numbers until 2008-2009, it’s safe to say that this industry has lagged behind others, which were attracting large amounts of investment. 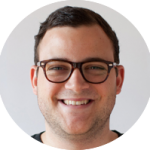 Noah Kotlove is our community manager for New York and D.C, working to both expand and enthuse our user base in those cities. He graduated from Penn in 2013 and has worked in sales and marketing roles for a handful of startups, big and small, before CompStak. Noah enjoys talking shop, watching highbrow reality television, and banana bread. 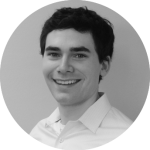 Joe Leon lives and breathes new market expansion. Hailing from Washington, DC, Joe graduated from Georgetown University and spent 9-months studying overseas in China. Joe brings a diverse set of experiences to the table, having been a sales trainer, policy fellow and professional disc jockey. When not skipping lines at the airport with TSA Pre Check, you can find Joe cooking, listening to house music and sipping tea.