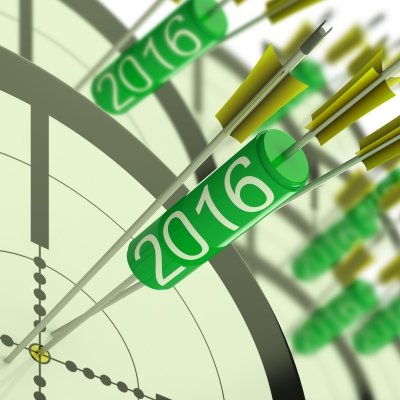 Like many, I was caught off guard by the “great recession” as it is now called. I was a rather young fellow, in my mid 20’s with an impressive net worth and being founder of a private capital finance company with more than $100 million deployed in real estate around the country. In my time in the real estate business, I saw only one path to asset values and activity – up. I had of course heard about recessions. I had been told the tales by my board, my mentors, and many of my investors who had lived through either the Great Depression or any number of recessions since then. Never in my wildest dreams, however, did I think we would see real estate values plummet by 65% or more.

I remember in early 2008, the grumblings of a market correction were on the tips of many people’s tongues. In my board room, I sat around the table with older, wiser, more experienced advisers and investors who contemplated that this correction might be “really bad,” perhaps “20-25%!” If only that were the case.

Having lived through and ultimately recovered from one of the nastiest real estate crashes since the Great Depression, I vowed never to be caught off guard again, and thus began my journey to learn about asset class bubbles and cycles. I spent a large majority of the next four years reading, researching, talking, listening, traveling and studying not only the real estate market, but also the various world economies and markets that ultimately impact U.S. real estate. What I found was nothing short of “so simple that it’s stupid.” All of the complexity that economists, market “experts,” stock brokers, currency traders, and politicians pound down your throat, is utter garbage, and understanding what is really going on is far easier than most would ever dream.

Really, It is Just a Cycle

If you look at asset classes over time (lets pick real estate), the value has greatly increased, if nothing else due to inflation which will always be the primary driving force throughout time and regardless of bearish periods of time. If you draw a steady line (we’ll call it the mean line) from the beginning of 1900 to current day 2016 right through the middle of price trends in real estate, you’ll notice that the price trend is definitely UP. You’ll also notice that there are periods of time when the prices get above the mean line and then retrace to below it, but eventually, prices will increase above the mean line again. This is the nature of any market, including real estate, stocks, commodities, and the like.

One period of time wherein prices are above the mean line, then below the mean line, then above it again are referred to as a “market cycle.” Simple enough, eh? Well, not quite so fast. There are both minor and major cycles. What we saw in 2004-2008 was a major market cycle, also referred to as a “bubble.” The bubble burst, and ultimately prices came crashing down. The trick is determining where and when there is a bubble, the best time to buy, and the best time to sell.

The best time to buy is below the mean line, and the best time to sell is above the mean line. That’s easy enough. But price alone is not necessarily the biggest determining factor for identifying a price bubble or even a market cycle, although it can be a point of reference. Forget the “deflation bugs”, generally speaking, prices will increase over long periods of time. One measurement to use is that with major market cycles, the top will re-top in the next major cycle by 50-100% over the previous major cycle high, and it will bottom approximately half way between the last previous major cycle low and high. In other words, if the price measurement tool is accurate, the next “big boom” in real estate prices could show us 50-100% higher prices than the previous market did in 2007. I know, I know, it seems silly doesn’t it? Well, its math, and time tested, and usually right.

The trick in avoiding getting crushed at the top of a market, however, it’s a price measurement at all. It is actually a psychological measurement. Sir John Templeton, perhaps one of the greatest and most controversial investors of all time said it best: 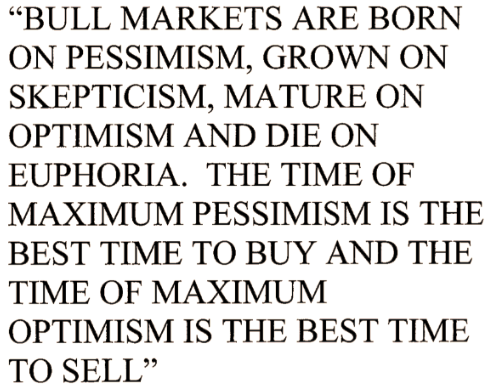 Too simple for you? Okay, let me show it to you a different way, identifying the specific emotions and general sentiment that you will find at the top and bottom of a major market cycle: 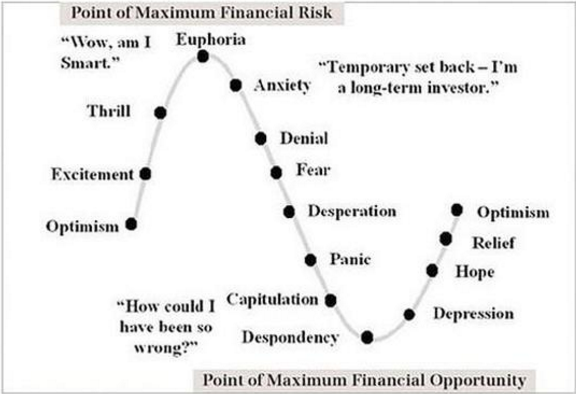 Having lived through the last major cycle in real estate, I can attest to the fact that most real estate investors had a lot of optimism, then excitement, then they felt the thrill, then they thought arrogantly about “how smart they were”, and they topped with absolute euphoria, buying fancy houses, luxury cars and taking extravagant vacations paid for by the equity they were making in their real estate holdings. And, it ended. First with anxiety, then with denial of the seriousness which turned into fear, desperation, and ultimately panic. The “I’m so smart” turned into “how could I have been so stupid?”

Minor market cycles come and go based on general market conditions and the various things that affect them. But major market cycles and born, grown and die on human psychology. Far too many people still remember the bad times of the last “Great Recession,” and greed, arrogance and euphoria have not yet taken over. But optimism, and excitement are certainly present in the commercial real estate market today.

No, I Do Not Have a Crystal Ball

I know the question you want to ask, “Jordan Wirsz, when will the next cycle top???” The answer is, I don’t know. What I do know, is that for now, I’m enjoying the optimism and excitement in the marketplace. It is a nice break from the woes of times past. But I’m enjoying it without the fear of being caught in the next bubble, because the tell-tale signs of the next market top aren’t here yet. Timing is difficult, so I won’t make predictions as to exactly when. In the meantime, I’ll ride the minor market cycles up and down without fear or anxiety of a downturn because I am a long-term investor. However, when people start thrill-seeking and amateurs start thinking that they are brilliant investors, then you’ll see me run for the door to exit the market as fast as greased lightning.

The point is, you can create all kinds of brain damage trying to figure out what all the economic data means, and 90% of the time you are going to be wrong. Or, you can wait idly by, calmly bobbing up and down as the market does its “ebb and flow” until you start seeing the tell-tale signs of a bubble. Then, and only then, should you pre-emptively exit during euphoria (quickly, mind you) and run for the hills. Until then, enjoy the ride.

Jordan Wirsz serves as the founder and CEO of the Savant Companies (2011-present) and is the principal of Savant Investment Management, LLC. Mr. Wirsz brings with him more than 13 years of real estate investment experience in a wide variety of real estate assets representing hundreds of millions of dollars of transactions. Mr. Wirsz is also a notable author and speaker, and in the past has devoted considerable time to those endeavors through his company Jordan Wirsz International Inc. (2009-2011). Mr. Wirsz continues to speak on investment and business topics when his schedule permits.

Is Time your Friend?Major Benefits of CRM Rollout
Comments: 1