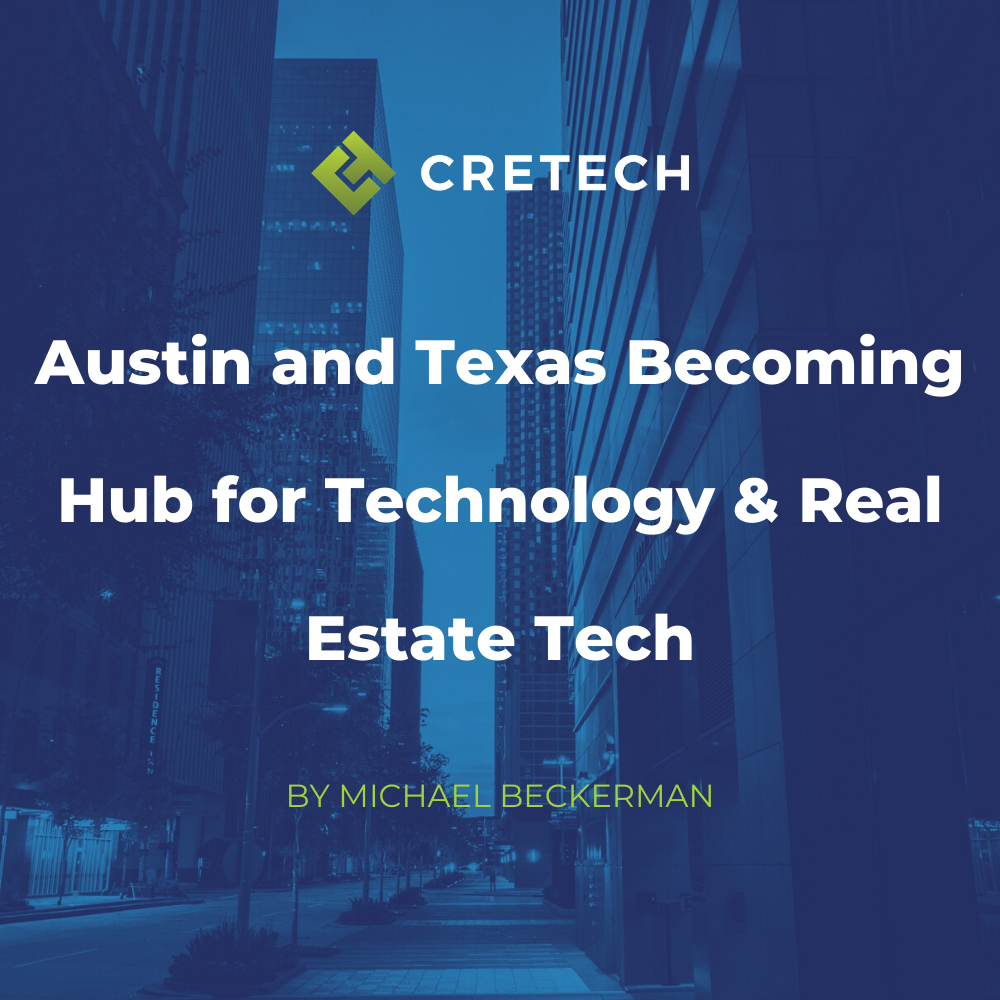 The real estate startup scene has a dark horse city. While New York, Silicon Valley, and London are acknowledged hotbeds of real estate tech, Austin, with all of its eccentric weirdness, has momentum that looks unstoppable.

The industry’s largest tech giants have all increased their footprint in Austin in recent years, with plans for expansion. Bloomberg VC journalist Lizette Chapman notes that “Austin’s population increased 23 percent from 2010 to 2017, growing faster than any other U.S. metropolitan region.” Amazon, which owns Austin-based Whole Foods, added 1,400 tech jobs to the local ecosystem in 2019. Bloomberg reported that Apple would “invest $1 billion … to build an office park capable of holding 15,000 additional employees, roughly double the current [local] workforce.” Rounding out tech industry heavy hitters, Facebook employs more than 1,200 locals and occupies 256,500 square feet at the new Third + Shoel highrise and Google recently leased nearly 900,000 square feet of space to add to its footprint.

With a criteria focused on assessing which cities offer entrepreneurs the best conditions for growing their businesses, Commercial Cafe awarded Austin top honors in it’s ranking of the “Best 20 US Cities for Startups and Entrepreneurs,” beating out the usual suspects, but also Washington DC, Seattle, Denver, and others vying for a slice of the profitable tech industry.

As startup entrepreneurs have taken notice and moved to Austin in droves, the city has seen a run on its commercial spaces. This influx of workers has created reciprocal growth in the city’s infrastructure projects—new building and housing construction underway will “expand the size of the downtown area by half,” according to Chapman.

The real estate tech industry has also taken note of Austin’s status as the new darling of the startup world—both established names and new proptech startups alike have found reasons to lovefound purchase in Austin. Real estate franchisor Keller Williams, with its more than 150,000 associates around the globe has long called Austin home, while Qualia Labs favors its Austin offices with more employees than those at its San Francisco headquarters because, according to CEO and Founder Nate Baker, “Austin is on fire right now” and it’s an “easy sell to employees.”

Baker is not the only startup founder to feel that way. Startups are not only calling Austin home, but as these companies scale they bring even more momentum to the city’s real estate tech scene. OJO Labs acquired RealSavvy just last October, Opcity was acquired by Newscorp, and Homeward is not going anywhere any time soon, having raised $25 million in summer 2019 for growth. Others proptech companies calling Austin home: Likely.AI, The Guild, REX, RealMassive, Juniper Massive, and a seemingly endless list of others.

Austin’s commercial real estate boom is just getting started. As we noted earlier: Since 2018, a total of $494.5 million has been invested in Austin-based proptech companies by 82 unique investors, according to the CREtech knowledge and research team.  48 deals took place between 2018 and now, where a total of 35 proptech companies received funding. Of the 48 deals, 29 of them took place in 2018, with a total dollar volume of $348.9 million. In 2019, a total of 19 deals took place, where the total dollar volume was $145.6 million.

“This is literally day one” for real estate tech according to OJO Labs founder John Berkowitz. “Whatever we have seen in the last decades, it’s nothing compared to what is coming. You are going to see [Austin] become ground zero for a lot of innovation and a lot of change.”

The Shadow in the Sun

With growth, however, comes downsides. Josh Baer, founder of the Capital Factory accelerator, “worries Austin could lose its cherished weirdness and replicate the urban woes of San Francisco, where high-earning tech professionals drove up the real estate market to extraordinary levels,” according to Chapman.

But it doesn’t have to be that way. The city is rapidly building new housing, and the clanging of construction cranes hammers away week in, week out. Right now is the time for the city and developers to integrate affordable housing stock for low-income renters into the city’s growth plans. And beyond that, to thoughtfully select their headquarters locations in the downtown versus suburbs to better address equity of access for future employees.

The stakes are high. Millennials prioritize affordability when looking outside of Silicon Valley, and Austin’s liberal appeal is certainly a notable selling point for the tech workers moving to Texas. If something doesn’t improve, according to the founder of an Austin-based startup accelerator founder, “the cool people are going off to live somewhere else,” and the weird will go elsewhere right along with them.

A bright light for proptech is impressive growth beyond Austin—the entire state is blowing up. It’s always been a tax haven, which only fuels momentum. “The Lone Star State loathes personal income taxes so much, it decided to forbid them in the state’s constitution,” according to Investopedia.

Texas accounts for “three of the top five job growth markets in the country,” reports Dallas News, and “Austin tops the list with projected job growth of 2.6% in 2020. Dallas comes in third, just behind San Francisco (2.5% projected growth). Houston (1.9%) and Orlando, Fla. (1.7%) round out the top five.”

The regional strength is a big part of Google selecting Midlothian (south of Dallas) as the home for a new $600 million data center that “will create hundreds of construction jobs and an unspecified number of full-time Google jobs.”

Given the statewide picture unfolding even as Austin tops every chart, there is no denying that smart entrepreneurs are increasingly discovering the Lone Star State might just have more to offer—and at a more affordable cost—than the Golden State.

All these reasons and more are why we selected Austin to kick off our 2020 conference lineup.

We hope you join us on April 22 and 23 at the Convention Center in the heart of downtown for a lineup of unbelievable speakers and groundbreaking discussions.