[Short story] Future Office: The Adventures of Hannah and Skip 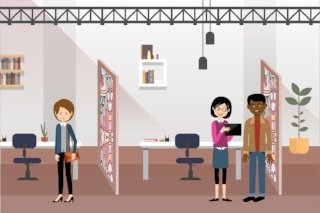 Never believe anyone peddling either nostalgia or a certainty about the future.

Fiction is the way to go. You get to explore the realm of possibilities and entertain new ideas while still maintaining a sense of realism and anticipation. And perhaps most importantly, it’s fun.

We wanted to try something a little different this week. There’s plenty you can read about 3D property tours, drones, the Internet of Things, driverless cars, etc. and how those technologies will impact commercial real estate. But let’s push it out a bit further in time and focus in on the people―specially, one person and her family―and how they might operate in a world seemingly ruled by technology.

Below, you can read an excerpt of the first part of our fictional series, Future Office: The Adventures of Hannah and Skip. Then read the rest, and subscribe for updates on the next installment.

Hannah could still not believe that he had chosen her. Her grandfather had always lit up when he talked to her, but he was like that with all his grandchildren. Why had he chosen her as the executor of his trust? She didn’t even know that he had a trust…or what exactly a trust was for that matter.

But, now she found herself at his desk, surrounded by stacks of colorful carpets from his hometown in Ethiopia that he spent his life buying and selling. A task-bot on her screen was politely walking her through the steps to complete her grandfather’s morbid sounding “day of death” tax return.

She looked around at the metal building that represented the majority of her family’s inheritance. It wasn’t much to look at, not much more than an aluminum cube. It was much too big for her grandfather’s importing business, but when he bought it, the predominantly immigrant neighborhood it was in was undesirable and cheap. That was back when this area was on the outskirts of town, now it seemed to be swallowed up by the city, blending into the landscape it once used to border.

Hannah had always thought that stacking the rugs in piles on the floor was wasteful. She always thought the building would look much better with the beautiful tapestries hung from the walls like they were in the showroom. Some of her best memories were recorded in front of the backdrop of these handwoven masterpieces. After school, she would take the school’s yellow buspod to the showroom and study surrounded by the warm colors, always amazed at how much more quickly she could finish here than anywhere else.

“Yeah, I don’t think that we can run the business without Baba here,” Hannah admitted, “I just wish we had a good use for the building. Uncle Dani is pressuring me to sell it, but I think Baba would have wanted it to continue providing for the family. He loved working here…” With the smell of the freshly brewed coffee, an idea hit her. She knew of a way to keep the building, her grandfather’s legacy, and support his offspring.

Mob Mentality: Why Invest in the Medical Office Building Segment of #CRE?Predictions – Schmidictions