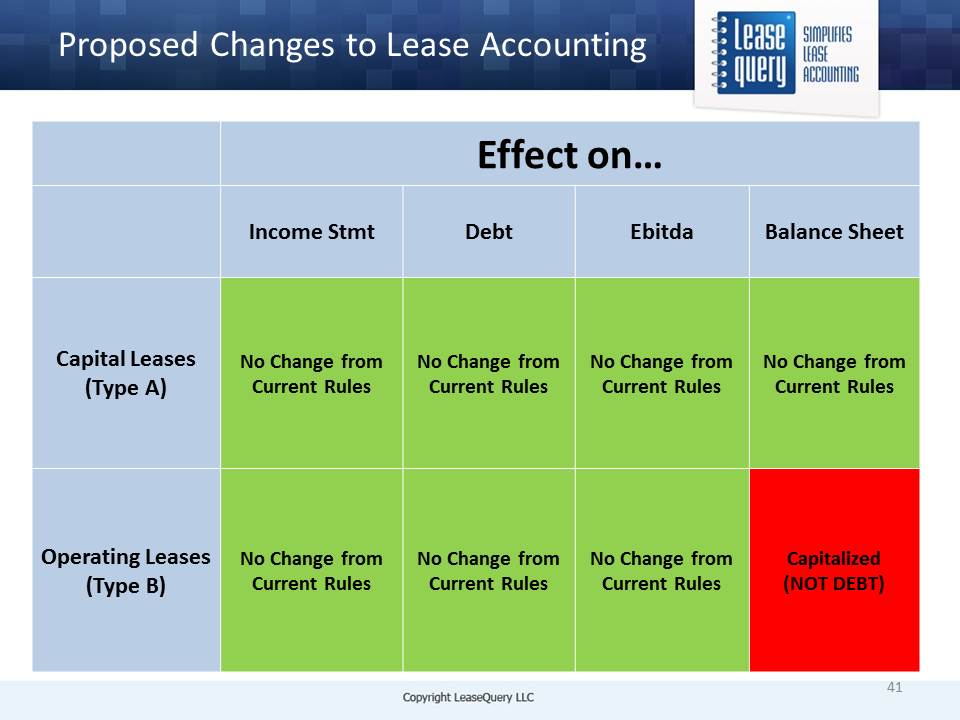 Type B leases = Operating Leases: Under the new lease accounting rules, operating leases will now be called Type B leases. The way to distinguish between Type A (Capital) and Type B (Operating) leases remain largely unchanged, except that the FASB eliminated the bright–lines in the rules, that is, the 75% of lease term and 90% of FMV rules are no longer hard and fast, primarily because the board is moving away from “rules” based accounting to “principle” based accounting.

Subsequent Lease Liability Calculation: Subsequent values of the lease liability are determined via accretion using the effective interest method, similar to other financial liability. Like any other loan amortization schedule, a portion of the payments each period goes to liability reduction, and the remainder goes to lease expense. Please note that UNLIKE Type A leases, where a portion of the payments goes to debit interest expense, under Type B leases lease (or rent) expense is debited. That said, while the subsequent lease liability calculations are the same under Type A and Type B leases, the entries made are different (Type A requires an entry to Interest Expense, while Type B requires an entry to Rent Expense). Click here for a summary of Type A leases under the new proposed lease accounting rules.

Subsequent ROU Asset Calculation: The ROU asset is amortized as the difference between “average rent” and lease (or rent) expense from the liability. Average rent is simply straight line rent expense under today’s rules for operating leases. Note that unlike Type A leases, the amortization of the ROU asset for Type B leases is NOT deemed depreciation expense. Just like the amortization of the liability under Type B leases, it is also called “Lease (or Rent) Expense.” As a result, rent expense for Type B leases is recorded on a single line item for Type B leases; but a portion comes from the liability and the other piece comes from the ROU asset. The total effect on the income statement is “average rent,” which is the same effect operating leases have on the income statement under current GAAP.

About LeaseQuery:  LeaseQuery is lease accounting software that helps companies manage their leases.  Rather than relying on excel spreadsheets, our clients use LeaseQuery to get alerts for critical dates (renewals, etc), calculate the straight-line amortization of rent and TI allowances per GAAP, provide the required monthly journal entries (for both capital and operating leases) and provide the commitment disclosure reports required in the notes and the MD&A.  Visit us at www.LeaseQuery.com