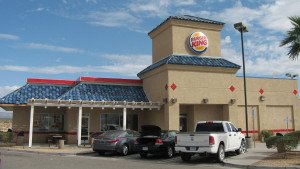 • Burger King – 72465 Baker Blvd., Baker, CA – Built in 2004, the 3,705 square foot store is adjacent to the heavily traveled I-15 freeway and has excellent signage and visibility on Baker Blvd. The town is a popular rest stop and tourist destination for drivers traveling between Southern California and Las Vegas, NV. The location enjoys strong retail synergy with several other national quick service restaurants and gas stations. The property was purchased by a private investor based in North Hollywood for $2,450,000 ($661 psf) representing a cap rate of 5.6%.

• Burger King – 4150 E. Highland Ave., Highland, CA – Built in 1993, the 3,541 square foot store is located at the signalized entrance of Highland Avenue Plaza, the dominant community center in the growing trade area. Anchored by a recently remodeled Walmart Supercenter, Ross, Fallas and Dollar Tree, the center is located near the junction of the I-210 freeway and Highway 330. The property was purchased by a Pasadena based private investor for $2,070,000 ($584 psf) representing a cap rate of 4.6% which is one of the lowest cap rates for a Single-Tenant Burger King transaction in the past several years.

The operator of both locations is one of the five largest Burger King franchisees in California with over 90 locations which made the properties even more desirable. “Collectively we generated 14 competitive and qualified offers which is representative of the strong investor demand we’re continuing to see for high quality Single-Tenant NNN retail properties in the Inland Empire” said Vora. “The sales also highlight the cap rate compression we are experiencing in the market due to tight supply and demand drivers.”